Android and Samsung build on their market shares in Q3 2012

Android's market share increased significantly during the third quarter of 2012, with the Google OS powering 72.4% of all smartphones sold in the three months' period. Apple's iOS came a very distant second with a market share of 13.9%. 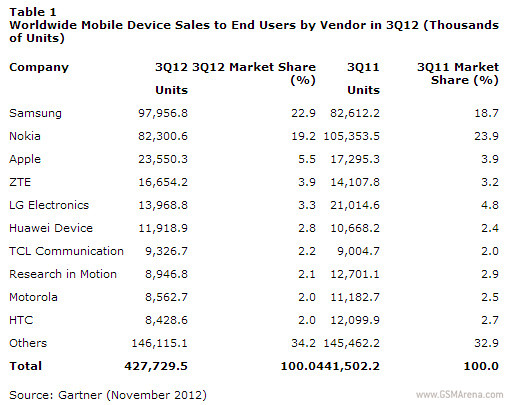 This is an impressive accomplishment for Google's mobile OS, considering Android's market share was 52.5% in Q3 of 2011.

Samsung saw its position as the leading mobile manufacturer increase to 22.9% after selling almost 100 million phones in the three month period ending in September. This was mostly at the expense of Nokia, which saw its market share slide almost 5 percent points year-over-year. 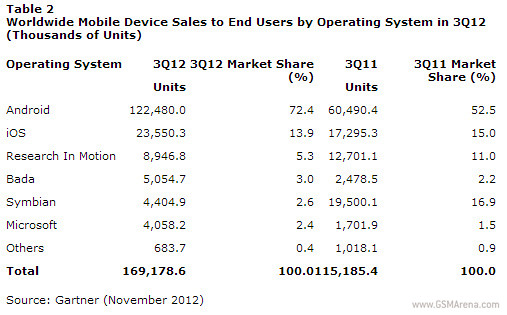 The holiday season should see Apple take back some of both of those pies, as many iOS-faithfuls held off on replacing their smartphones until the iPhone 5 came around. Apple's new smartphone top dog is expanding its availability to many new markets in Q4, which should help Apple arrest the fall in iOS market share.

I can't believe this HTC is better than Sony ? why is Sony not there in that list

I think Android is going to stay up top for a good long while...but Im also hopeful and fairly sure that Nokia will always have something. If only Nokia would develop for Android as well