Google has released Android distribution numbers for the month of April. The chart shows Oreo's market share now stands at 4.6%, while that for Nougat is 30.8%. Marshmallow, on the other hand, currently has a market share of 26.0%. 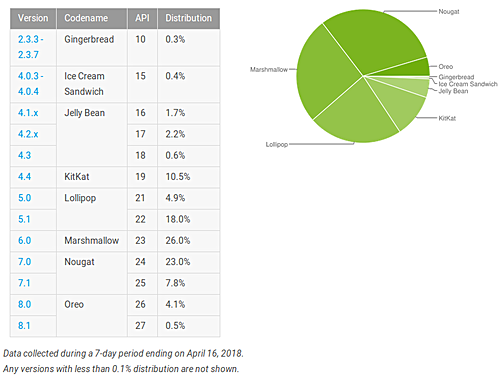 It's worth mentioning that it was February when Google last released these numbers. For comparison, Oreo was at 1.1%, Nougat was at 28.5%, while Marshmallow's share was 28.1% a couple of months back.

I'm about to do the same, been an Android user for years but it seems like Google and their partners will never change.

And this is the very reason loads of people who buy iPhones are called iSheeps. You have 0 knowledge about the android yet bashing it instead of learning about what and how to do. I can't believe people like you still exist in 2018 when you ca...

So glad I decided to get an iPhone instead of Android when I switched from Windows. Android is a joke of an OS. It can't even achieve Windows phone level of features, design, user experience, updates, etc., but hey! It's got an impressive collection ...