Three months after the stable release of Android Pie and it still doesn't show in the monthly stats. However, Oreo is on the rise since September while Nougat numbers are falling.

Perhaps more OEMs are updating their devices to Oreo or the new device releases in the mid-range and low-end segment have pushed Oreo numbers up a little. If you haven't noticed, most of the new releases for the past couple of months come with Android 8.1 or 8.0 Oreo out of the box.

The rest of the Android versions such as Lollipop, Marshmallow, KitKat and Jelly Bean hover around the same percentages with steady but negligible share decrease. 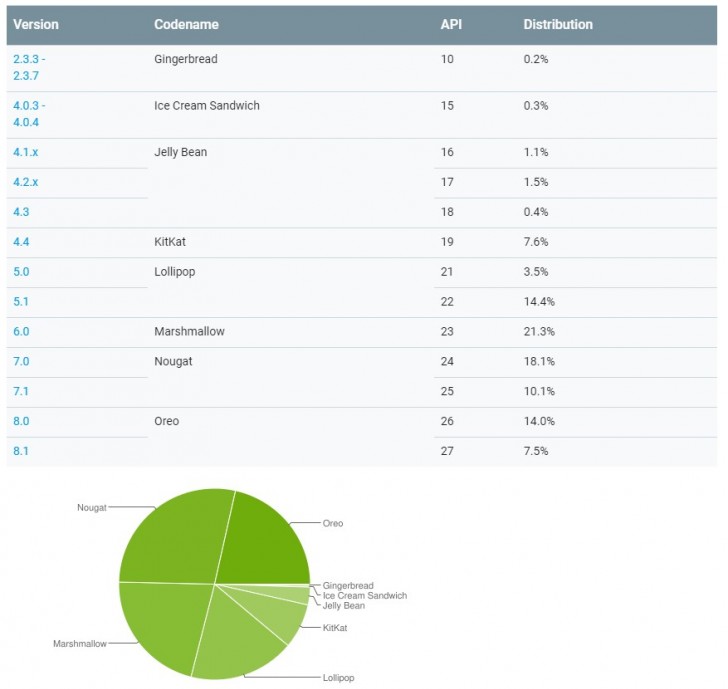 Keep in mind that versions with less than 0.1% share are not shown and the data is collected during a 7-day period ending on October 26. Which could also mean that Gingerbread probably won't make it to the charts in November or December.

This is a segment where Android will most likley never be on par with IOS. The main point is, that all iPhones and IOS are ruled by one company, and in Android game - there's lots of manufacturers who also put their own skins on Android to make ...

Well, it will take sometime for Pie to be included in that pie. Unless Samsung and Huawei updated their flagship phones running Oreo, that's the only time we will see it in their OS distribution chart.