Android distribution numbers for December show Nougat at 0.4% of the market

Today Google has updated the Android platform distribution chart, as it does every month. So we now know how much market share each version of the company's mobile operating system had over the past week.

Let's start with 7.0 Nougat, the latest iteration of Android before today. It's now at 0.4%, a 0.1% jump compared to where it was in November's chart. Today Google has outed Android 7.1.1 Nougat for Pixel and Nexus devices, so we'll probably see that release in January's chart. At the moment there's still only one version of Android that has less devices running it than Nougat, and that's Froyo, which is more than six years old. 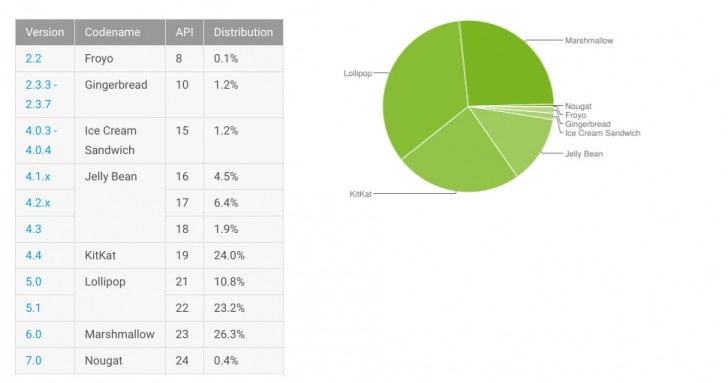 These numbers are meant for developers, so they know which versions to support/drop. Which devices that CAN run it, isn't much of use.

I have two android phones. One is running Marshmallow, one Lollipop. Very satisfied user. Especially Marshmallow is very smooth.