Android distribution numbers for October are in and Ice Cream Sandwich and Jelly Bean are still short of the reach Google might have hoped for. 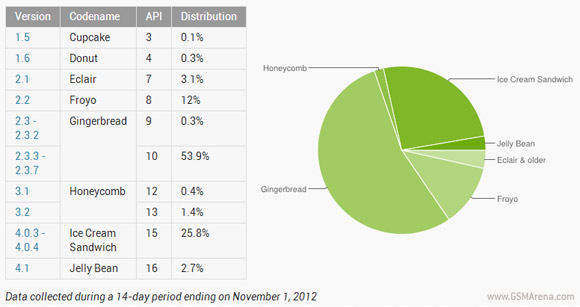 At merely 2.7%, Android 4.1 Jelly Bean usage has jumped just 0.9% compared to September, 2012. The OS debuted exactly 6 months ago, and despite Samsung and HTC's best efforts to update their high-end devices, Jelly Bean is still to get proper traction.

Ice Cream Sandwich distribution is also on the rise clocking in at 25.8%, almost 2 points up from last month. With most manufacturers having completed their scheduled ICS updates, we don't expect this number to continue to climb. Especially with the majority shifting their attention to Jelly Bean.

Finally, Gingerbread is continuing to drop from 55.8% in September to 53.9% in October. With most devices comprising this number being low-end droids that would never see an update in their life, this number isn't likely to plummet anytime soon.

For more details and data, click on the source link below.

First strike isn't all that there is to it. You need to keep pushing! Remember HTC, it was first on the Android boat and made some huge success with the Android platform. But look at them now, Scamsung ran them over in just few months!