The number of apps is some sort of pride for app stores so here it goes - the Android Market is quickly catching up to the current leader, the Apple App Store. What's more is that the growth the Market seems to be speeding up, while that of the App Store is slowing down.

The current numbers are 350,000 apps in the Apple App Store and 250,000 in the Android Market. The App Store still has a sizable lead but when you look at the numbers from six months ago, it seems that this lead may not last very long.

In October last year, Apple's store was a cool 185 thousand apps ahead at a time when the Market had a mere 100 thousand apps in total. Over the last six months however, the Android Market has added about 150 thousand apps to its virtual shelves while the Apple App Store managed just 65 thousand new items.

The bar chart make sit easy to grasp how much faster the Android Market grew than the Apple App Store. BlackBerry's App World and Windows Phone 7's Marketplace are barely on the map. 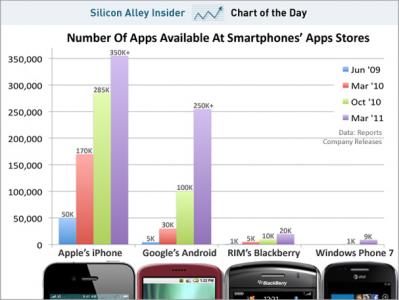 It's not all good with the Android Market though - first malware issues and now apparently some apps were reverse-engineered and resold by other developers due to lack of censorship. Discoverability is also an issue - if not for anything else, we find the search feature of the Android Market quite subpar despite what Google's reputation may suggest.

One indie dev says that Google's own apps and iPhone app ports aside, actually getting your app or game discovered is a tough challenge. Things got worse when he discovered one of his games is actually being sold by another company under a different name. That company has also copied several other games. 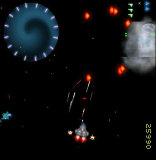 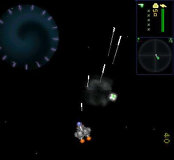 Sinister Planet (original) on the left, Galaxy Wars (copy) on the right

It's stuff like this that will drive developers to alternative app stores (like Amazon's) but it's an open question if they can do things better than what Google has managed. We at least hope they would reach more regions.

Apple can never win (this way), since it takes too much money and trouble to get your apps in there.

I think you will find that Nokia have discarded their Symbian OS and are now looking to utilise Windows Mobile 7.

Experience on both Market/Appstore only difference i see is market is for business and Appstore is for Passion, Quality matters !!!!