Apple’s App Store has held the top spot pretty much since the dawn of app stores but the times they are a-changin’. The Android Market has already surpassed the App Store in terms of free apps and analysts from Distimo estimate it will soon overtake it in terms of total apps too. Well we'd be more conservative in using words like "soon" but the guys over at Distimo might have a point there.

The Android Market has 134 thousand free apps on its virtual shelves, while the Apple App Store for iPhone offers 121 thousand free apps. Still, the iOS store has the lead in total count, having about three times as many paid apps as the droid store. 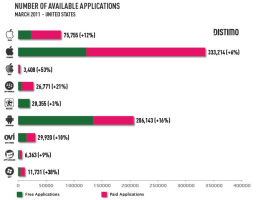 Free vs. paid apps and total app count for the various app stores

The iPad section of the App Store holds about 75 thousand apps, 30% of which are free. iPad-only apps number 34,000. App Store for iPad grew by 12% in March, but paid apps in there are getting pricier and apps with in-app purchases are declining.

The iPhone and iPad sections of the App Store combined hold 367 thousand apps and they are still growing. The Android Market is expected to overtake it in total apps soon – in five months or so, by Distimo’s estimates. 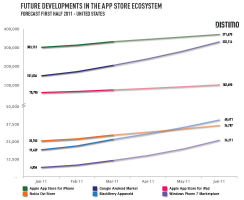 Android Market is set to overtake the Apple App Store

The smaller app stores will have their day too - BlackBerry App World is expected to shoot ahead of Ovi Store by the end of next month and a couple of months after that, the Windows Phone 7 Marketplace will get pass the Ovi Store too.

Many developers have also gone multi-platform, posting their stuff on not just iOS but Android, Ovi, App World and the rest. This also chips away at the iOS advantage. 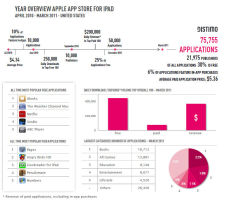 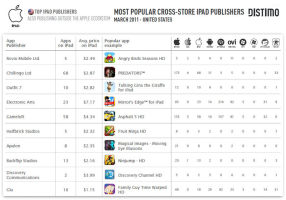 What do you think - are free apps more important than paid ones? Does the total number of apps even matter or do you need just a few essentials?

App count is pointless. Pick all royalty free jpegs on the internet and for each one generate a "$jpeg wallpaper app" and "$jpeg clock app" etc. In a few hours, you can add many millions apps, and zero value, to the app store that...

Every application in the App Store its now the best, but in iOS it looks and feels way better than the same application in other Ecosystem. you can't deny that...

And every Apple App Store app is great? I think not.