Android top operating system in the US, Apple top manufacturer

According to the latest research by Nielsen conducted in the month of June, Android has again come out as the top smartphone operating system with 39 percent market share. Meanwhile, Apple with its iOS has gained a market share of 28 percent, also managing to become the top smartphone manufacturer in the US. 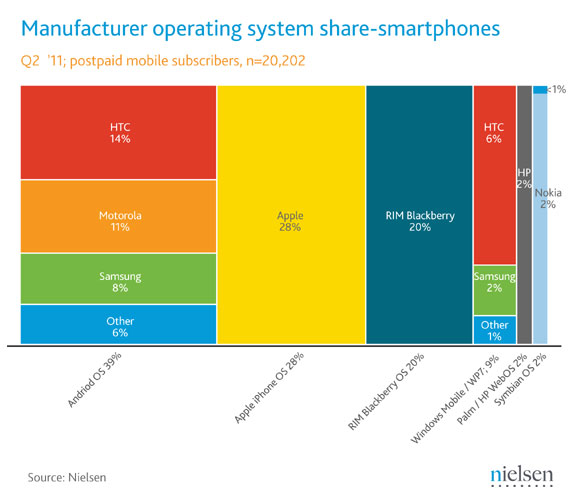 HTC on the other hand managed to acquire 20 percent of the market, with 14 percent of it being due to Android phones and the remaining 6 percent due to Windows Mobile/Windows Phone sales and became the second largest manufacturer in the US after Apple. Samsung came third with 8 percent of Android sales and 2 percent through Windows Mobile/Windows Phone. Motorola is still holding onto an impressive 11 percent thanks to all the Droids.

Others are not doing so well. RIM share dropped down to 20 percent whereas the combined share of the old Windows Mobile and the new Windows Phone is still just 9 percent. webOS and Symbian brought up the rear with a lowly 2 percent each.

nokia symbian belle could b the tough cookie for tha android....firefox wil also bring their own operating system.....

it would be better if Android tries its utmost to completely get rid of iOS since iOS has done some thieving from other brand-name phone's app (esp. Samsung).

why nokia still not launch a android os phones..?