Only two weeks have passed since the first Android-powered Samsung was officially announced and it already has company. Photos of two new Samsung handsets running on the Google's OS leaked online today, along with most of their specs sheets. 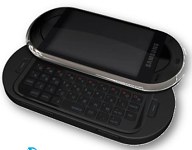 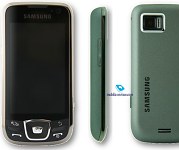 The two new Samsung handsets are codenamed Bigfoot and Spica will be running the v2.0 Donut of the Android OS. Yeap, you got that right - Android v1.5 isn't yet completely distributed to the market and v2.0 is already about to appear. According to the source the upgrade to v2.0 won't be available to every handset out there with the decision left for the carriers to make.

Samsung Bigfoot and Samsung Spica will both sport quad-band GSM and tri-band 3G connectivity. The 1700 Mhz HSDPA band on the Bigfoot hints of the fact that it will be available on T-Mobile in the USA. The two devices are basically trimmed-down version of the Samsung I7500, coming with 3" WQVGA TFT displays and 3MP autofocus cameras.

The Bigfoot and the Spica will also sport Wi-Fi, GPS, USB and Bluetooth connectivity, leaving nothing more to be demanded in this area. Built-in accelerometers and digital compasses complete the list of known specs for both devices. 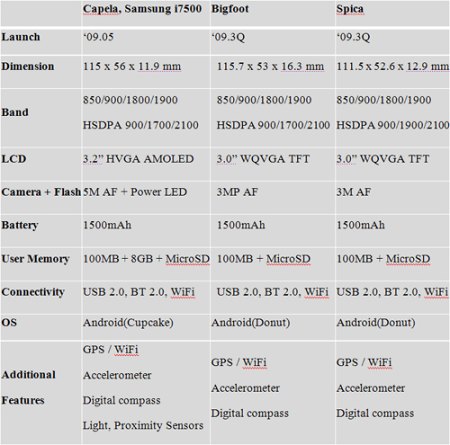 The Samsung Bigfoot and Samsung Spica should become available in Q3 of this year but their retail price remains to be seen.

Samsung is number one in North America, not Europe.

Samsung is the best

No it just means that anybody with half a brain can see that it is an image taken from apple's coverflow. Can you understand that concept or do you end up in other people's houses late at night cos you think they all look the same?