Love it or hate it, Angry Birds is one of the most successful series of games of all time. Since 2009 when the first game released on iOS, the series has spanned fifteen titles across multiple platforms and become a billion dollar franchise.

Six years since the original game released, Rovio has now released the sequel. While it may seem disingenuous to call it Angry Birds 2 considering how many games have been released since the original, it does make sense if you consider others as more of spin-offs of the original rather than sequels. Also, for the first time Angry Birds 2 brings some major changes to the bird-flinging action to warrant the sequel tag. So let's take a look at it, then. 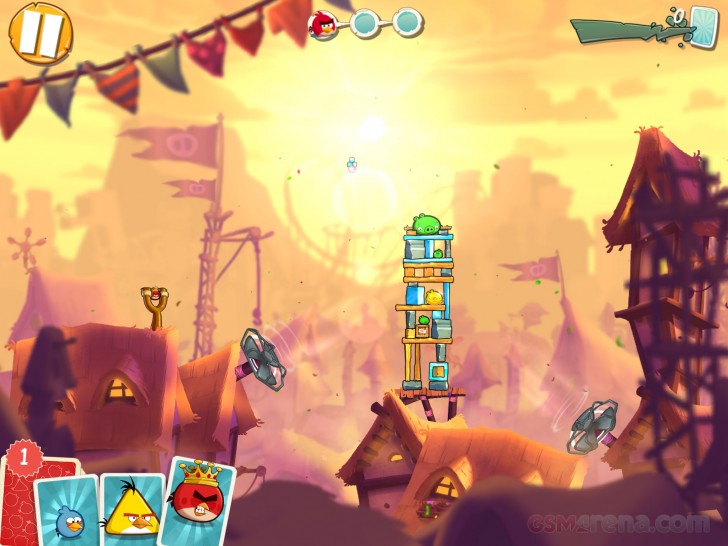 At its core, Angry Birds 2 still has you flinging birds at pigs inside elaborate but fragile structures. Break the structures and kill all the pigs before you run out of birds and you complete the stage. Depending upon how much destruction you cause and how many birds you use (fewer the better) you get a score that decides how many stars you get for that stage, three being the highest.

That much is common to the original Angry Birds. Now here's the new stuff. Unlike the original, you can now choose which bird to use. The available birds appear at the bottom as cards and you can tap any of them to select whichever bird you think would be more appropriate for the situation instead of being stuck with a preselected bird. As you play more stages, more birds are unlocked. 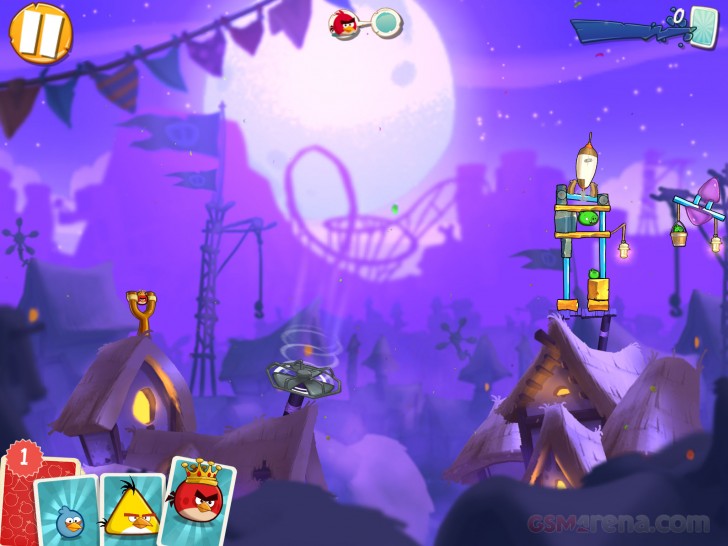 Along with birds, you also unlock spells that can be used to make finishing the level easier. The duck spell rains ducks everywhere and destroys all the pigs in that level in one move. The freeze spell turns all the structures into ice, making it easy for any bird to destroy them. The chili spell makes one of the pig explode, destroying everything around it. As you progress, you unlock more spells.

As you cause destruction, you fill up a meter at the top right. When the meter fills up, you get an additional random card, which could either be one of the birds or a spell. This is why it's important to cause as much destruction as possible and not just concentrate on killing the pigs. 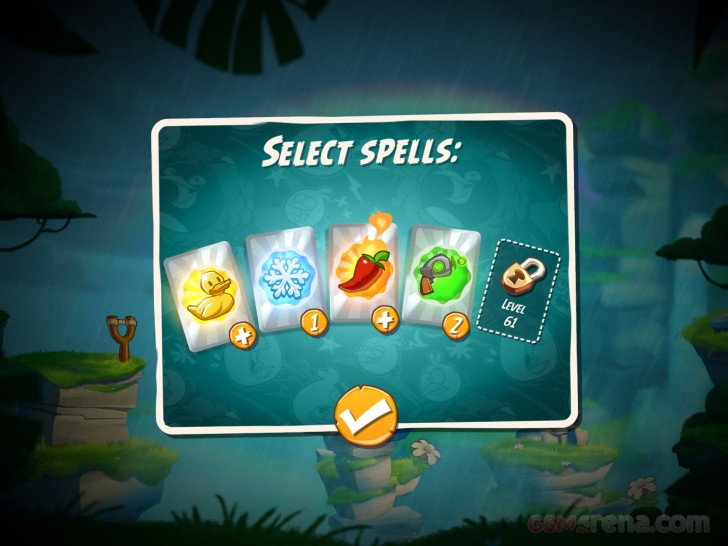 In Angry Birds 2, each stage has multiple levels within and finishing one level lets you progress to the next with the remaining birds (similar to Angry Birds Epic). When you finish all the levels within a stage (usually 2-4) you move on to the next one. It's important not to use up all your birds at the first level so you have some left for the remaining levels in that stage. If you use up all your birds before that then the game is over.

When game is over, you can either choose to continue by paying in gems, or restart that stage. Restarting uses one of the lives you have, and you only have five lives. If you use up all the lives you have to wait for them to refresh (a la Candy Crush Saga), or spend gems to get more lives. As you can tell, gems are important in the game if you're impatient and although you do get them every once in a while as you keep playing if you want more you have to spend real money, which is where the game's IAP component comes in. 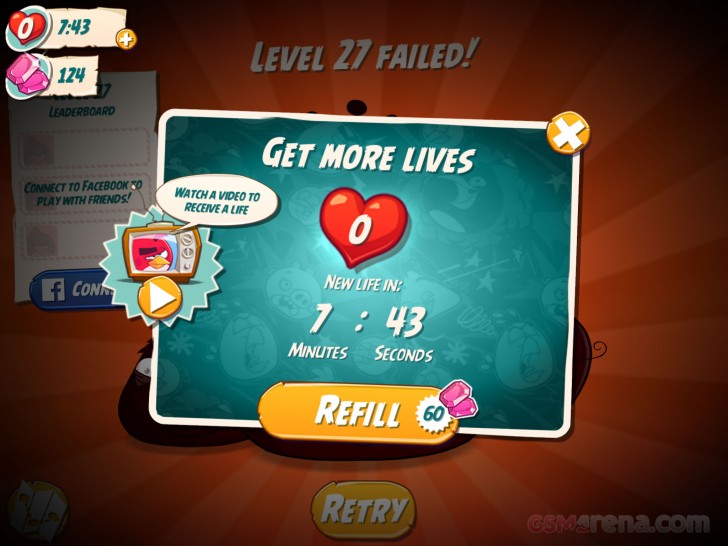 The birds are more or less identical to the original. There are seven of them, with most of them returning from the original but the weird green one is replaced with a silver one, who instead of flying back like a boomerang flies up and then straight down. All the birds have secondary attacks, even the otherwise useless red one, where you can tap on the screen just before they hit something to activate their ability, such as sending a shock wave for the small red bird, splitting into three for the blue one, shooting in a straight line for the yellow one, dropping an egg bomb for the white one, etc. This does make the game bit more interesting than simply lobbing the birds at the structures and with some planning and clever use of their abilities you can cause far more destruction.

Angry Birds 2 has around 240 stages in the current game, with each stage having multiple levels within, so you could be playing this for days. They are split into multiple sections that unlock as you play, and more will be added later. The thing about the stages this time is that they are randomly generated every time. If you restart a stage, the structures get randomly rearranged, which never happened before in any Angry Birds game before. 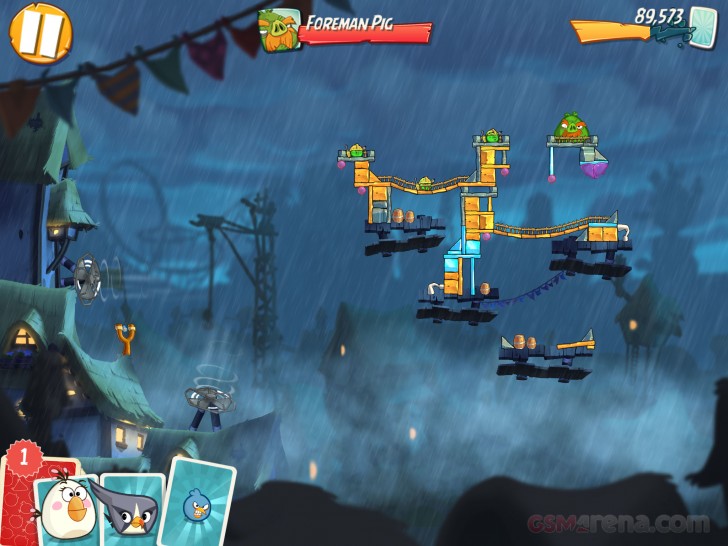 After a few normal stages there are boss battles, where you essentially have to wear down a rather large pig with a health bar but they are not all that difficult, and the boss battles are somewhat repetitive. 'Not all that difficult' is generally applicable to the entire game itself, although in later stages you can run out of lives pretty quickly if you are not careful enough with how you use the birds. Still, it is not hard to burn through several dozen stages in one day.

Other than the standard stages, there is also the Arena, where you can keep playing as long as your birds last and compare your highscores with your Facebook friends.

I wasn't expecting much from the game but came away surprised and rather entertained. At this point, most people are simply frustrated to see yet another Angry Birds game, but if you give it a chance it is actually quite fun. The new card system for selecting birds is great and the new stages and animations make it interesting enough to keep playing. 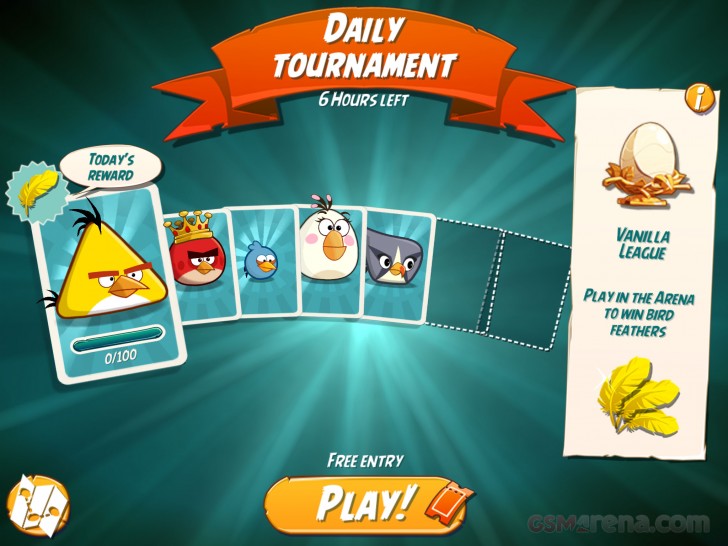 The new animations do help out a lot. The destructions are more bombastic than ever and everything breaks and explodes with a lot of energy, with things flying everywhere and pigs and stones being hurled at the screen. There are also several new mechanics, such as flowers that suck in things and then spit out with force and fans that blow air and help you guide the birds around, which are fun. Other things such as improved parallax background movements, weather effects, etc. coupled with a peppy new background music tracks really make this seem like a new game.

Just in case you were expecting an almighty rant about how this is yet another Angry Birds game and not worth your time I'm sorry to disappoint you but the new Angry Birds 2 is genuinely fun. Yes, some of the IAP elements such as limited timed lives are a bit annoying but I've seen worse and it never really bothered me too much. Overall, I did have a lot of fun with this game and if you need to pass some time this is highly recommended. Also, it's free so you don't have to worry about wasting money.

Cons: Limited lives with timer can be bothersome

The service center is a joke or worthless which you choose! They never replied to any issues with the game or even replied back! New issue is game likes to freeze when playing ads and you have to reboot game!!!

When playing. Other player's in the arena you cheat by slowing mine down or hesitates while. The computer plays not a player, plays and make 5 million points and new men added and I lose stop the glitches and playing the computer that no one c...

I agree with you...very addictive and love the game. I pay a lot to play but am tired of stenghting the birds and no result. I will use the remaining credits but not another dollar. It's too bad really.