Yet another alleged Apple iPhone 6 dummy unit made the rounds online. The mockup is of much higher quality than the one we saw earlier today, thus potentially giving us a better look of the upcoming smartphone. 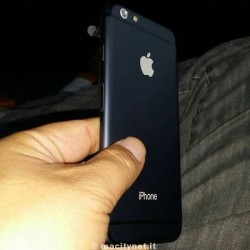 The latest dummy unit is tipped to be the creation of a case manufacturer and falls right in line with past leaks. It showcases the power/lock and volume buttons on the side of the handset, as well as its already leaked, slightly protruding camera unit with LED flash.

There is no word on the screen size of the handset in the photo. Judging by its proportions however, we reckon that we are looking at the rumored 4.7” iPhone. A number of reports suggest that Apple will launch a duo of large-screen iPhone devices – one with 4.7” screen and one with 5.5” unit.

We don’t know when the iPhone 6 will go official just yet. The usual September time frame is likely.

You're drunk my friend :p

I had an iphone 5s. Never buy one again.no smartphone is worth overa hundred bucks.these lphones depend on your home pc more than anyother smartphone.it cant go solo at all.they say quality phone.not at all. Thats breech of contract. Breech of securi...