Another purported press image of Samsung Galaxy Tab S2 made the rounds on Twitter, once again courtesy of @OnLeaks. This time around, we get to see the back of the upcoming high-end slate. 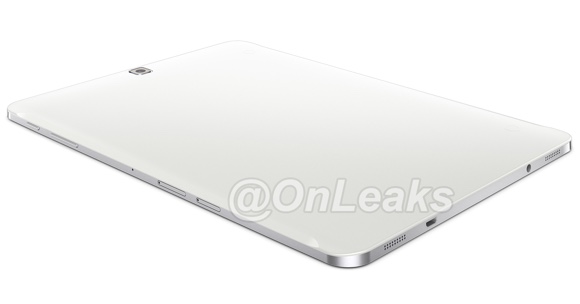 In line with yesterday’s leak, the new render suggests that Samsung Galaxy Tab S2 will feature the same design as the Galaxy S6, headed by metal frame. The latter will be a massive improvement over the glossy plastic setup of the tablet’s predecessor, Samsung Galaxy Tab S.

The image also confirms that the slate will be available with cellular network connectivity. A SIM card slot and a microSD card slot are sitting side by side.

Past rumors have suggested that Samsung Galaxy Tab S2 might be thinner than iPad Air 2. Alleged specs of the slate include 9.7” display with 2048 x 1536 pixels (like recent iPads and the Nexus 9), 3GB of RAM, 32GB of built-in storage, 8MP rear camera, and 2MP front snapper. The chipset is going to be a Samsung Exynos solution with octa-core CPU.

For work. Checkout cam scanner to grasp the idea

the voice of the reason. . . i hope they dont put cameras on more things i rly dont want to see people complaining about pencils without 20MP of camera. . .