Another Asus Zenfone 3 version runs GFXBench, has its specs revealed

Back in January, we saw two upcoming Asus devices getting benchmarked using GFXBench, a process which revealed most of their specs, as is always the case with such prototypes. Those are still probably going to be two distinct Zenfone 3 models, and today a third has surfaced in the exact same benchmark's database.

For now it's known only as the Asus Z016D. Its screen size is wrongly reported by GFXBench (this happens a lot) - yet if we assume that it meant 13.8 centimeters instead of inches then the phone sports a 5.5" display, which would make a lot more sense. 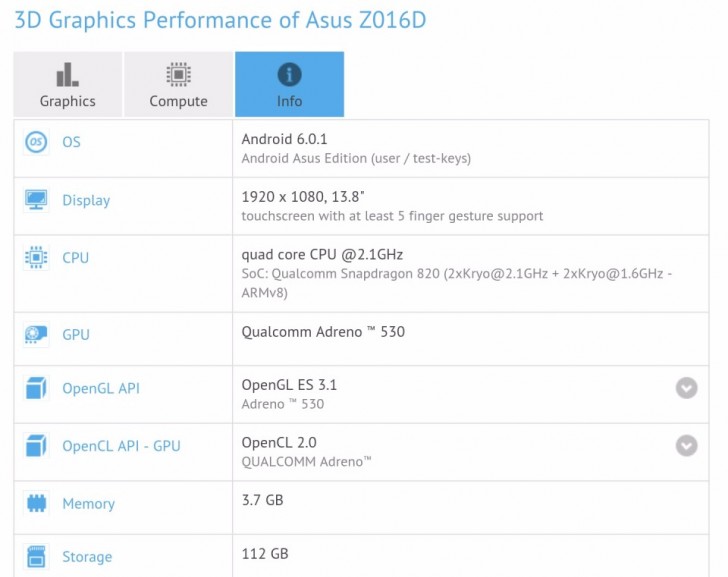 Anyway, its resolution is 1080p Full HD, while the chipset powering the handset is the Snapdragon 820 from Qualcomm, aided by 4GB of RAM. Internal storage here is 128GB, though it's unclear if it's expandable or not. The main camera has 21 MP resolution and can record 4K video, while the selfie shooter is an 8 MP unit.

This Zenfone 3 variation runs Android 6.0.1 Marshmallow and they all should be on the same version when they launch. The big Zenfone 3 unveiling takes place on May 30, which is next Monday, so there isn't a whole lot of waiting left to do from this point on.

Source | Via (in Hungarian)

zenfone 2 with intel inside is still the best. hehehe

With a 13.8 inch screen, it is my opinion that this has got to be the new Padfone S2 that we first heard was in the works back in July of last year - Asus teased that it would be one of the first devices with a Snapdragon 820. I believe one article ...