We told you recently about the Meizu Connected press event, scheduled for January 28. The Meizu m1 mini is expected to be officially unveiled there, but if a whole week is too much waiting for you, here's some more news on the device.

Contrary to previous rumors, which put the display size at 5 inches, the smartphone will apparently pack a smaller, 4.7-inch, screen. A protective rubber cover has been photographed in a Chinese store, indicating just that. In the expected price bracket a 1080p display was quite a stretch even for a 5-incher, but at 4.7 inches 720p is the best we could hope for. 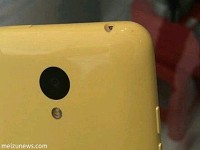 Another detail that's been revealed is the single LED flash accompanying the rear camera of the m1 mini. The flash and overall proportions are different from the the big brother, the Meizu m1 note, so the blurry yellow photo could be the real deal.

Again, specifications haven't been confirmed, but a Mediatek chipset with an octa-core processor is expected, with 2GB of RAM and 16GB of built-in storage. Speculations will be put to an end in January 28, so we might as well just wait it out.

Without LTE it's not an upgrade for MX2 owners... Hope rumors about LTE are true. Hope for NFC as well.