Roughly a couple of weeks after its first appearance, a new screenshot of Samsung’s next generation TouchWiz user interface made the rounds. Once again, the capture got out on Twitter thanks to @evleaks. 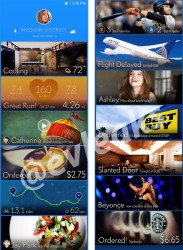 The screenshot reveals a radically new, tiled UI. Similar to the Magazine UX which launched alongside the company’s latest Android tablets, the feed delivers a host of relevant information to the user in one feed. We can’t help but notice a slight resemblance to HTC BlinkFeed, though with more functionality.

All in all, considering the duo of leaked screenshots this far, it appears that Samsung’s next generation mobile UI will represent a serious change from the one currently on offer. The updated user interface is more than likely to debut on the next Samsung Galaxy flagship.

everyone copying wp 8 flat look..may it be apple or samsung

Sony's existing UI is far much better than this for ur knowledge just beat this new UI http://www.gsmarena.com/sony_xperia_z2_ui_screenshots_leak-news-7607.php