The Sony H8266 is back in the spotlight – after Geekbench, AnTuTu was its next stop. This benchmark is more detailed in the specifications it records so let’s compare them to the specs we saw earlier. 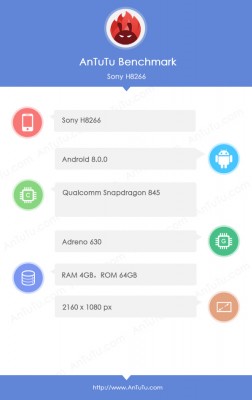 The benchmark occasionally records camera information, but this isn’t one of those times. The earlier rumor claimed dual 12MP main camera and a 15MP selfie cam, though it also put the screen at 5.48” 1080p (the standard 16:9 rather than a taller aspect ratio).

They img one is more believable at least

I'm pretty sure it's a fake. I did one version too: https://i.imgur.com/YWqNjnU.png Just toying in photoshop..

Here it is and it looks real to me. https://www.gsmarena.com/sony_xperia_xz2_alleged_render_bezelless_design-news-28765.php