Now this requires a healthy pinch of salt before we dive into the actual information. AnTuTu is a popular benchmark and, every now and then, its database unearths some yet unannounced device.

This time around we get the Samsung Galaxy GT-I9600, which in theory could pose as the successor to the very popular, and current Samsung flagship, Galaxy S4. The device is also running Android version 4.3.2, which isn't yet out of the door, and a processor clocked at 1.4 GHz. 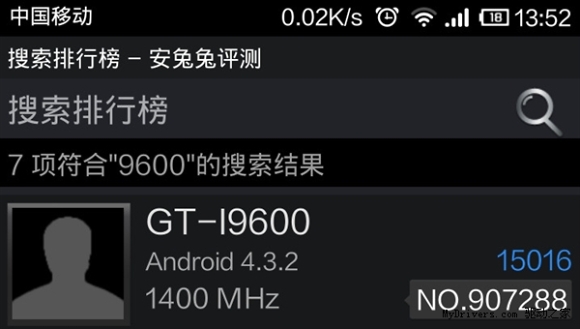 As it is early for a Galaxy S5 the logic is that we're seeing the first glimpse of some sort of Galaxy S4 Plus.

However, there have been two Galaxy S Plus devices - the I9001 Galaxy S Plus and the I9105 Galaxy S II Plus. Both devices sport model numbers, which are an differ from the original flagships by their last digit and not the second one.

There's also the the pretty low score, which is well below what the Galaxy S4 or Galaxy S III achieved in AnTuTu. This could point to a mid-range device, but that's unlikely with that kind of model number, so it's either down to the early firmware or the record is bogus altogether. Another suspicious bit is the fact that Android 4.3 isn't out of the gate yet so the listed version 4.3.2 instead of 4.3.1 is rather hard to explain.

Why was the smartphone I9500 with such a good chipset not produced the the proper LTE 4G and quoting the proper frequencies which will probably be used in Europe such sa the 1800 and 2600 and with the octa 5 and with CPU of 1-6 GHZ to fully support ...

Yeah right. Their so called "Android 4.3" still looks like the dated looks of Gingerbread UI with comical color all over.

i think its a tweaked device and maybe it's the original s3...