The Apple iPad Air 2 is having its announcement this Thursday and rumors have it that the slate is powered by an Apple A8X chip. Today, new purported photos of the SoC have emerged giving more credibility to this rumor. 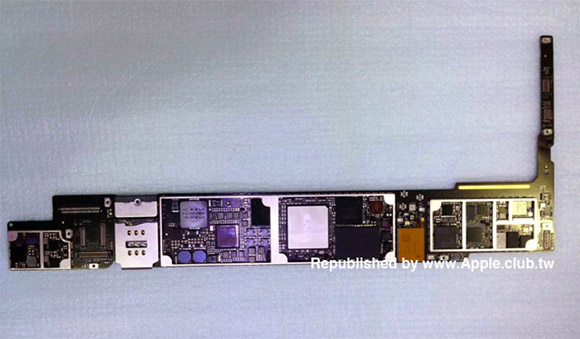 In addition to the full logic board, photos of other parts such as the glass screen cover, audio control components and the Home button with TouchID have also been snapped. The A8X variant of Apple's chip, just like the A5X and A6X before it, is expected to have better GPU performance.

This is also an indication that Apple could be bumping the display resolution of the upcoming iPad Air 2 to the so called Retina HD. Evidence of this has been discovered in the latest iOS 8.1 Beta, which indicated user interface elements designated as "3x-ipad".

While specifics of the resolution in questions aren't known yet, it is definitely a possibility that Apple is going to ship a sharper display than the current 2048 x 1536 pixel panel. However, more GPU horsewpoer isn't the only thing the A8X chip is expected to bring to the table. Allegedly, the RAM is also increased to 2GB, which should enable heavier multitasking.

The rest of the novelties iPad users should expect are TouchID, thinner profile at 7.5mm, 720p FaceTime camera and Apple Pay. nternal storage options are said to be 32GB, 64GB and 128GB.

@ Anonymous First of all, you didn't return any facts so please don't try to talk to others in terms of dumb/smart. (I dont't pretend i'm smart, just talking about a phone). I didn't talk in terms of overkill for Apple but for the phone. Accor...

rumours apple and mtv working together

After using Android phones over a decade, owning a iPhone 6 Plus seems to be degrade when it comes to the features. And who said iPhone don't lag and hangs. Try login to youtube and you will get whole of lags in iPhone 6 Plus. Connecting to new wifi ...