Apple accounts for half of US phone activations in Q4

The September launch of the iPhone 6 and iPhone 6 Plus has provided Apple with solid ground to maintain its ruling position on the US market. A newly published survey by Consumer Intelligence Research Partners reports that a dominating 50% of phone activations during 2014 Q4 have been iPhones. 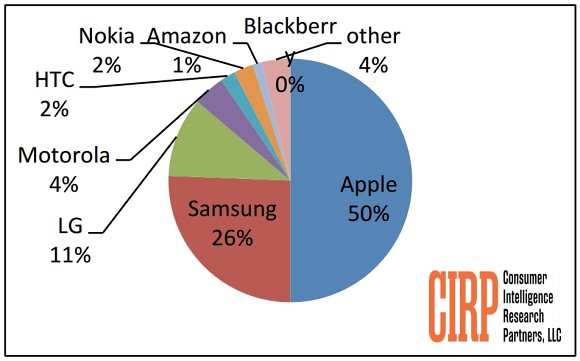 Samsung is in second spot, but is left far behind with only half of Apple's share. What's more troubling for the Korean company is that they are down from 31% for the same period of 2013. LG is in third taking a tenth of the market, the rest distributed among Motorola, HTC and others.

Brand loyalty towards the Koreans isn't strong either, with 25% of previous Samsung owners switching sides and opting for an iPhone instead. With LG that number is a tiny bit less bothering at 18%.

It must be pointed out that the survey pool included a somewhat low 500 subjects, which may influence the actual distribution after the top three spots.

"Android cheap phones are just flooding the market building up numbers" not every is one is as rich as you....D/:

Airdrop is so limited apple to apple only..