Apple AirPods disassembled by iFixit, given the lowest score possible

The professional gadget teardowners at iFixit got their hands on Apple’s new AirPods and they gave them a repairability score of 0, zilch, nada. Now, each earbud weighs only 4g - not a lot for a headphone, battery, proprietary wireless chip (Apple W1), beamforming microphones, proximity sensors and an accelerometer.

An impressive feat of engineering, but Apple sealed it in tightly. Each earbud had to be sliced open and it turned out that everything inside was secured with a hearty dose of glue.

A tiny battery and the antenna are snuggled up in the “stem” of the earbud, the shiny ring on the bottom is the charging contact and conceals the main microphone. As you can imagine, there’s no way to put Humpty Dumpty back together again. 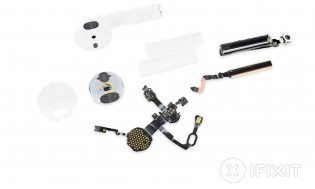 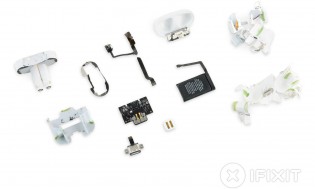 The remains of the AirPods • And their charging case

The charging case of the AirPods has less glue in it, but its disassembly proved no less destructive. A 3.81V, 1.52WHr battery is at the heart of this case, extending the playback time of the wireless headset to 24 hours.

The final verdict is a damning one - 0/10 repairability score, only negatives and no positives. Worse still, X-ray imagery suggests that Apple rushed the AirPods production leading to sub-par soldering. It remains to be seen how this will affect the longevity of the product, but it is so unlike Apple (which usually perfects even its chargers).

And keep in mind that it’s $69 if you lose an earbud or the case.

Another thing, the iFixit team is not the authority on how to take things apart properly. About 10 years ago when I repair Nintendo DS Lite systems, it took me 3-4 cycles (taking the whole thing apart and putting it back together) to fully understan...

This is click bait. Show me ANY earbud that is "fixable" by the average user? Even if you can take one apart without breaking anything, there is a good chance you won't find the right replaceable parts. Some things just aren't meant for "repai...