iOS 5 on the iPad

iOS 5 is also available for the iPad family. The fifth version brings everything we already saw in the iPhone 4 - the Notification Center, the Reminders, the Newsstand, the iCloud integration, the new iMessage service, the social integration with Twitter, the new Safari with the Reader, as well as minor (but important) tweaks on the Calendar, Mail and the Camera apps.

As you could expect the iOS 5 interface on the iPad looks a bit different, but everything works the same way as on the iPhone/iPod Touch version.

Here is how the Notification Center and the pop-up notifications look on the iPad:

Here is the iPad's Reminders interface:

The Newsstand is also onboard. It looks and works exactly the same as on the iPhone - it stores automatically your Magazine apps and magazines.

The iPad family is also compatible with all the iCloud services - sync, backup and restore. The iCloud settings are the same as the iPhone's and you also start with 5GB free cloud storage.

The Messages app is the same as the iPhone's, it just uses the two-column UI. The iPads now support iMessages, so you can chat freely with your iOS buddies given you have some sort of a network connection.

The Twitter integration has also made it on the iPads. To get started with it, you need to install the free Twitter app first (there is a shortcut in the Settings). Then you can start tweeting.

The new Safari browser now offers tabs in addition to the Reader functionality. The Dictionary works fine as well.

Now about those minor tweaks.

The first one is the yearly view in the Calendar:

The Camera app also offers swipe to show the latest picture - the same feature we first saw in the Windows Phone 7 OS. We guess, that’s the reason why Apple didn't advertise it at all.

An iOS 5 running iPad can now be activated wirelessly too. It also supports Wi-Fi iTunes sync and Over-The-Air software updates.

The iPad family also got an updated keyboard - it can now be split in two for easier typing while you're holding the device in the same time. Just pinch zoom in on the keyboard or swipe simultaneously with your two fingers in the opposite directions over the keyboard itself. 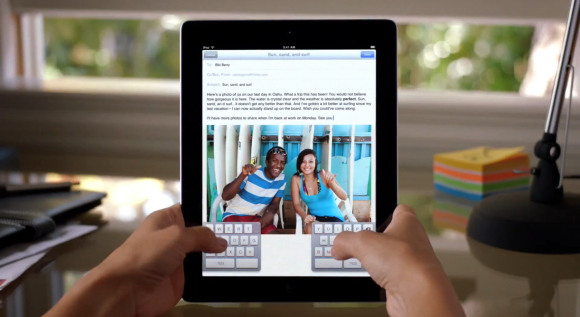 Multi-tasking gestures are reserved for the iPad

Much has been said about the iOS multi-touch gestures since the first iOS 4.3 beta came out. Basically, their purpose is to help you navigate through the UI without using the Home button.

You can switch between the active apps using horizontal four (or five)-finger swipes. A similar upward swipe will bring you the task switcher. There's a four (or five if it feels more natural) finger pinch zoom out. It will bring you to the homescreen, sending the app to the background.

Those gestures are only available in the iPad's version of the iOS 5.

The pinch zoom out and the horizontal swipes work everywhere but the homescreen, while the swipe up gesture is available across the interface.

Here is a video demo of how they work on an iPad 2 running the just released iOS 5.

Four fingers are just too much on the 3.5-inch iPhone screen - in case you wonder why those gestures are available only on the iPad. It would have been nice of Apple to have included them as an option anyway.

As you can see, there isn't much left to ask of the iOS. The fifth version brings the platform up to speed and the iPhone 4S promises to push its limits even further with the Siri intelligent assistant.

Surely, there are still lots of things missing - like Flash support, proper USB storage management, wider codec support and more. But most of the missing features go against the Apple doctrine, so we are probably never going to see them implemented.

As we see it right now, the future of the iOS is about novel native apps such as the upcoming Siri assistant, rather than integrating mainstream features. It seems the iOS core is almost complete, so it’s probably time for Apple to concentrate on making cool new apps and value-adding services - social, business, etc.

The iOS 5 is as good as any of the previous iOS updates - bringing just enough new features to be evolutionary, but not revolutionary. It's the same straightforward mobile OS we saw on the first iPhone, it's just becoming more complete. There are many people loving and hating the Apple way of handling things, but it's still the winning way on the current market - because it’s simple, it works as promised and offers the biggest mobile application store to date. The iOS has always been an app-centric rather than a feature-rich platform - exactly the thing that sets it apart, and puts it ahead of rivals.