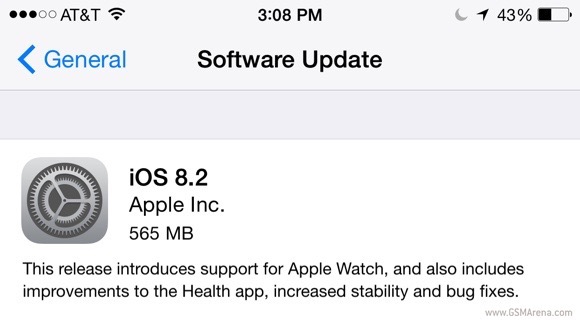 The most important change that iOS 8.2 brings is support for Apple Watch via a dedicated application. Full pricing and details on Cupertino’s smartwatch were revealed today.

A brand new Activity application for viewing fitness data from the Apple Watch is also on board. The functionality is available on Apple iPhone 5 and later models.

A number of enhancements for Apple Mail, Maps, and Music among others have also been included. Apple iOS 8.2 is a considerably sized update at 565MB.

To access the update on your device, head over to its settings menu. Make sure that your battery has at least 50% charge before you install the new firmware.

after update ios 8.2 i can't post a video on facebook.how can i solve this problem of mine.

Can't recharge cos sim application disappear after update of iOS 8.2