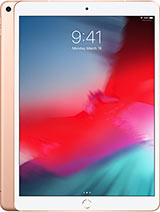 tigerbomb1996, 18 Mar 2019well it has a12 bionic xd even ios dont really need much ram unlike androidthe system differs like apple cpu doesnt want that much ram to play thing that why 2 are enough

Really, Apple? 2 GB RAM in 2019? I know IOS doesn't need as much but that will turn people away. Also, the cameras are low MP.

Anonymous, 18 Mar 2019It is 10.5" device and it is 2019 even most apple products use 3 or more ram, mostly 4. And ye... morewell i have ipad 9.7 2018 work flawlessly that has 2gb ram, browsing (opening tabs more than 50 no problem), play games (pubg and other no lags unless conectivity problem like slow wifi), social media (facebook, instagram, and many other work flawlessly no lags)

and just because iam use "xd" you assume me as "useless kid" wow just wow, at least iam paying both my need and my mother with my own jobs and not just assume people in internet as kid because they using "xd"

Anonymous, 18 Mar 20192 gb ram 550 euroWe don't know how much ram this has yet, the 2GB is just a placeholder until someone does a teardown since Apple never advertises how much ram they use in their iDevices. I would be surprised if it's anything less than 3GB and I'm hoping it might be 4GB.

With only 2GB of RAM this is very disappointing. Id have considered this if it had more, but multitasking will remain a problem.

tigerbomb1996, 18 Mar 2019well it has a12 bionic xd even ios dont really need much ram unlike androidIt is 10.5" device and it is 2019 even most apple products use 3 or more ram, mostly 4. And yes ram would be enough for normal app usage. But wont be good at highend performance app usage or high usage on web browsing. If a company give me a great cpu and mid ram (even for this big size device) i would call them nothing but oney trapper.

If apple would be honest they would go for more ram or a cheaper cpu.

And what is this "xd"?? What kind of useles kid you are?

Is it the first gen touch id or second gen?

It has 3GB of RAM instead of 2 according to GeekBench

Anonymous, 18 Mar 20192 gb ram 550 eurowell it has a12 bionic xd even ios dont really need much ram unlike android

the home button is back! sadly there is no face id on the new 2 ipads...