The above-9" tablet space has moved past great evolution and it offers mature products that are getting better and better. The iPad Air 2 is the descendant of the family that started it all and the perfect embodiment of the change.

Last year was about big changes highlighted in making everything smaller. This year continues the trend but in a more subdued way. The frame got thinner this time around, forcing the battery to shrink as well. Thankfully, Apple has kept the 10 hours claim true this year as well. 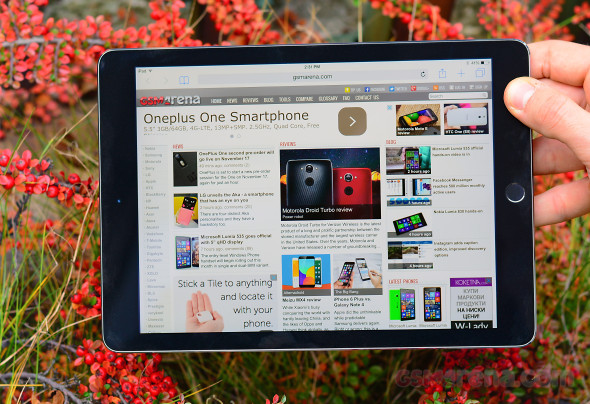 The iPad Air 2 is impressive and brings a lot of improvement but does so in a mature way. It's not the bold, drastic change its predecessor was. The iPad Air 2 has a Touch ID home button, A8X chipset, higher-res camera and a Gold option. At least those are the changes marked in bold.

There are more subtle changes in the iPad Air 2. There's an additional microphone in the place of the mute switch. The FaceTime camera has been updated, the display is now fully laminated and has an anti-reflective layer. All good but quite subtle changes.

All of this means that the Apple iPad Air is still very good and competitive. It's great for Apple and consumers when a year old tablet is still worth it.

The larger tablet segment is still densely populated with big names and Apple's own iPad Air does have a say in the conversation for best tablet out there. The iPad Air 2 has a more powerful processor, a much better graphics chip, a better camera, a thinner body, Touch ID and... a gold option. The iPad Air has the same size and resolution display, even if it's not laminated and costs €100 (also $100) less.

The biggest rival the iPad Air 2 has is the brand new HTC-made Google Nexus 9. It's smaller than the iPad in almost every way aside from the thicker profile. It boasts an 8.9" IPS LCD of the same resolution as the iPad Air 2. The chipset inside didn't prove to be just as good as the A8X in the iPad Air 2 but is still one of best and the slate is powered by the latest Android 5.0 Lollipop promising timely updates thanks to its Nexus moniker.

Choosing between the Nexus 9 and iPad Air 2 could play down to the choice of OS but the price is also due for consideration - €90 less for the Nexus slate.

The Samsung Galaxy Tab S 10.5 and the Galaxy Tab Pro 10.1 are also perfectly good tablets. Their Wi-Fi versions use an inferior Exynos 5420 chipset but both have marginally bigger screens, and more importantly, substantially higher resolution 2560 x 1600px. The Tab S has an impressive Super AMOLED screen, so it's probably a better pick.

Anyway, both tablets have excellent cameras and are both light and thin to almost match the iPad. Samsung's Multi-Window also makes a proper use of the large screen by allowing you to run two separate apps simultaneously.

The iPad Air 2 is a good advancement for Apple but marks a slight slowdown in terms of changes. Apple conquered the tablet space long ago and perhaps it now looks to carefully and delicately move forward for fear of tripping over and losing the gained ground.

Or perhaps this is just an incremental year for the iPad, the S model, the year where Apple gathers speed for the next unveil. It's a time-tested strategy for Apple when it comes to the iPhone lineup where the huge changes happen once every two years and perhaps next year we'll see a bold new iPad Air that's all about the features marked in bold.

In any case the iPad Air 2 is a great new tablet and one every iPad user can comfortably fall into love with. Apple made the right changes in the right way - all of which has lead to the best iPad ever all over again.