The phonebook on the Apple iPad Air 2 has remained unchanged in iOS 8 but now you can opt not to show the contact photos in your Favorite tab. The logic behind the phonebook app is completely the same though, Blacklist is available too.

As usual the phonebook offers Facebook and Twitter integration. After you set up your accounts the phonebook will automatically ask you to link your existing contacts with their social ones (if available).

The phonebook can search via the dedicated Search field at the top of the list of contacts or you can use the alphabetical scroll at the right.

Since iOS 6 your iMessage and FaceTime ID is joined and the phonebook will automatically detect if either service is available with each contact.

FaceTime works both over a cellular data or Wi-Fi. The service now offers voice calls too, in addition to video conference chats. With FaceTime audio calls and iMessages, iOS users won't need Viber as much to connect with other iOS users free of charge.

The dual microphones on the iPad Air 2 combine to reduce noise during a video. If you're doing a FaceTime call and switch from the front-facing to the rear-facing camera the microphones switch so that your voice always comes in clean.

The Apple iPad Air 2 scored a very good mark in our loudspeaker test. It blasts audio from two speakers on the bottom of the slate and the sound is of very high quality. It's also deep to the point where it lightly shakes the tablet when audio is running.

iMessage works on the Apple iPad Air 2. It has a very simple interface showing you the threaded conversations and tapping on a contact gives you the option to initiate a FaceTime call or video chat.

Now it's easier to attach pictures or video with the newly introduced recent row. It has about 20 of your latest images/videos in the gallery.

Naturally, the iMessage service is onboard. It lets you exchange instant messages between iOS 5 or later running iGadgets over Wi-Fi or 3G. You can send plain text as well as multimedia (pictures, sounds, videos) messages.

VIP lists are available - emails from people on the list will be delivered to a dedicated VIP mailbox and will appear highlighted in the regular inbox. You can also set a different notification regime for VIP emails - so they appear on the lockscreen, for example.

Moving on to the keyboard, which is also improved in iOS 8. It looks the same though it has been upgraded with predictive input called QuickType. Over time, the iOS will learn from your typing pattern, vocabulary, people you write often to and topics. It will eventually understand the subject of each thread and base suggestions on whether the communication is formal or casual.

Apple says the algorithm is really smart and understands everything and suggests prompt responses. Many competitive keyboards on other platforms are already doing similar things plus they are swype-enabled.

Siri-powered dictation is available pretty much in any app that supports keyboard input. You need just to hit the corresponding button on your keyboard and start dictating.

You can undock the keyboard, which places it dead center on the screen. You can then move it up or down, depending on what's underneath and where you would like to place it.

You can also split the keyboard in two by doing a simple pinch gesture on it or selecting it from the keyboard options. This is pretty useful in both portrait and landscape orientations if you have to type while holding the tablet - reaching the middle of the screen with your thumbs is hard, even when you hold the iPad Air in portrait orientation.

You can, finally, add third party keyboards to the Apple iPad since iOS 8. Below you can see Swiftkey but there are a number of others available. 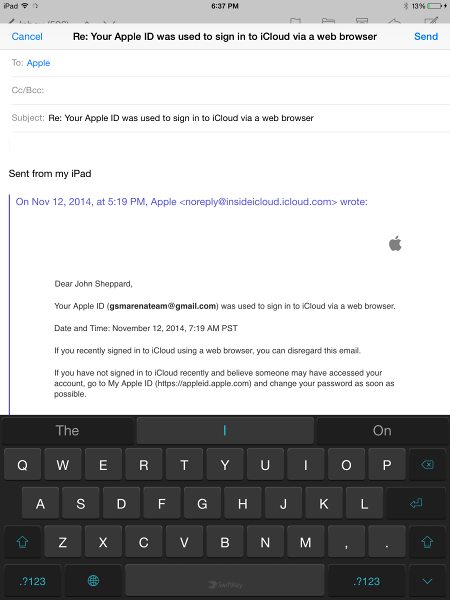