The iPad Air 2 may have stolen all the spotlight, but that's not because of poor marketing planning. Apple did little to change the third generation of the iPad mini so it got little stage time. But it's not our job to decide which product gets the most fanfare. Our job is to see whether it's worth your money. 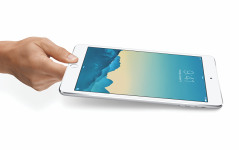 The list of the new features of the new iPad mini 3 is one really short list. The Home button now doubles as a Touch ID fingerprint sensor. There is also a new golden paintjob available along with the usual Space Gray and Silver. Oh, and the 32GB model is now axed - you only get to pick from 16, 64 and 128GB options.

Everything else is completely identical to the iPad mini 2 - the 7.9" Retina display, the Apple A7 chipset, the 5MP rear camera, and the thin and light aluminum unibody. No matter how small the hardware bump however the Apple iPad mini 3 remains one really powerful slate, positioned near the top of the food chain as far as tablets go. Let's explore it in detail.

The Apple iPad mini 3 is a pricey little tablet, but it has powerful hardware and a beautiful screen. It probably isn't worth the upgrade if you are coming from the iPad mini 2, but as a standalone purchase it sure looks attractive.

Quite expectedly, the iPad mini 3 inherits all limitations the previous generation suffered from, but Apple made it clear throughout the years some things will probably never change. So the lack of memory expansion and the non-users replaceable battery shouldn't be a surprise by now.

Enough with the introductions, our traditional hardware checkup begins on the next page.

I have used mine for 7 years and it has been great but the battery died. After only 7 years...go figure!

why iPad is disabled amd and connect to iTunes