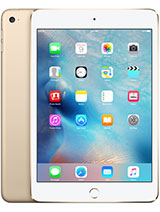 Yes smaller iPad Air 2! I will get this tablet soon!

To say it looks like Xiaomi is an absolute for an innovative product. IPad mini 4 kicks Xiaomi anywhere any day. I believe Xiaomi looks like iPad mini and not the other way around.

Anonymous, 17 Sep 2015Confirmed. iPad mini 4 is 2GB RAM of A8, clock at faster speed. Same as new Apple TV. L... moreWhen will this ipad mini 4 be released in the philippines?

Looks exactly the same as xiaomi 4i

Confirmed. iPad mini 4 is 2GB RAM of A8, clock at faster speed.

It's early to judge on it.It is not yet being sold on line

The specs of Samsung phones and tablets look good on paper. In reality, it is not good. Apple on the other hand is the opposite. Does not look good on paper, but the user experience bypass Samsung. Good specs only good for marketing purposes. OS is more important than the hardware. Keep in mind folks.

GSMArena is playing save, and use the specs of iPhone 6 / 6 Plus with comes with the A8 with 1GB ram version.

So for those who are afraid need to wait first, see more reviews before buy.

But specs aside, When on hands-on with iPad Mini 4, they show split screen mode, all the things iPad Air 2 can do, it can do also. So there is no fear when it comes to features.