It's been a while since we've seen an iPhone stand upright on its own. 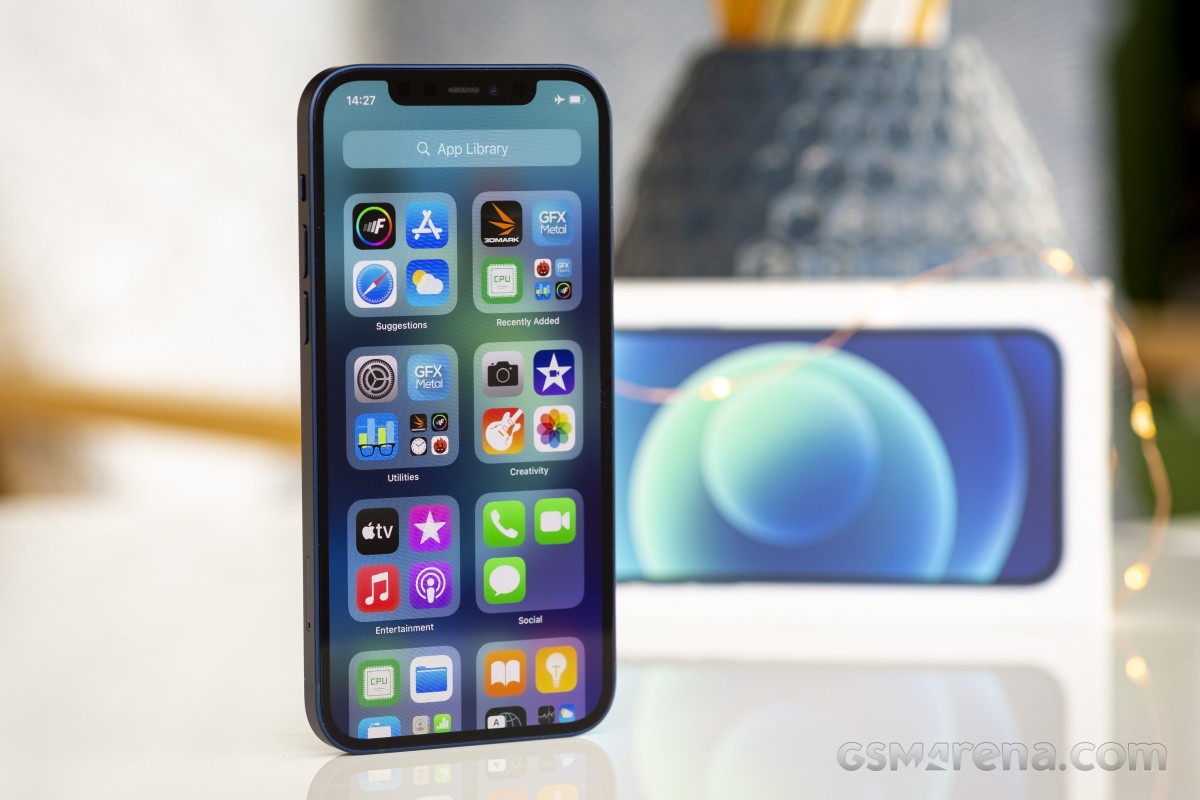 We've missed this flat frame and comfortable grip, and we've been hoping for a flat iPhone for years. And it's finally here, in four sizes at that. The 12th iPhone generation combines the best from the Series 4 and Series 5, now stuffed with the latest features and sprinkled with much-improved durability.

The iPhone 12 is a dual-glass smartphone with a metal frame, just like the many iPhones before it. But while it may be one of the lightest modern flagships, it is also shaping as one of the toughest glass sandwich smartphones to date. 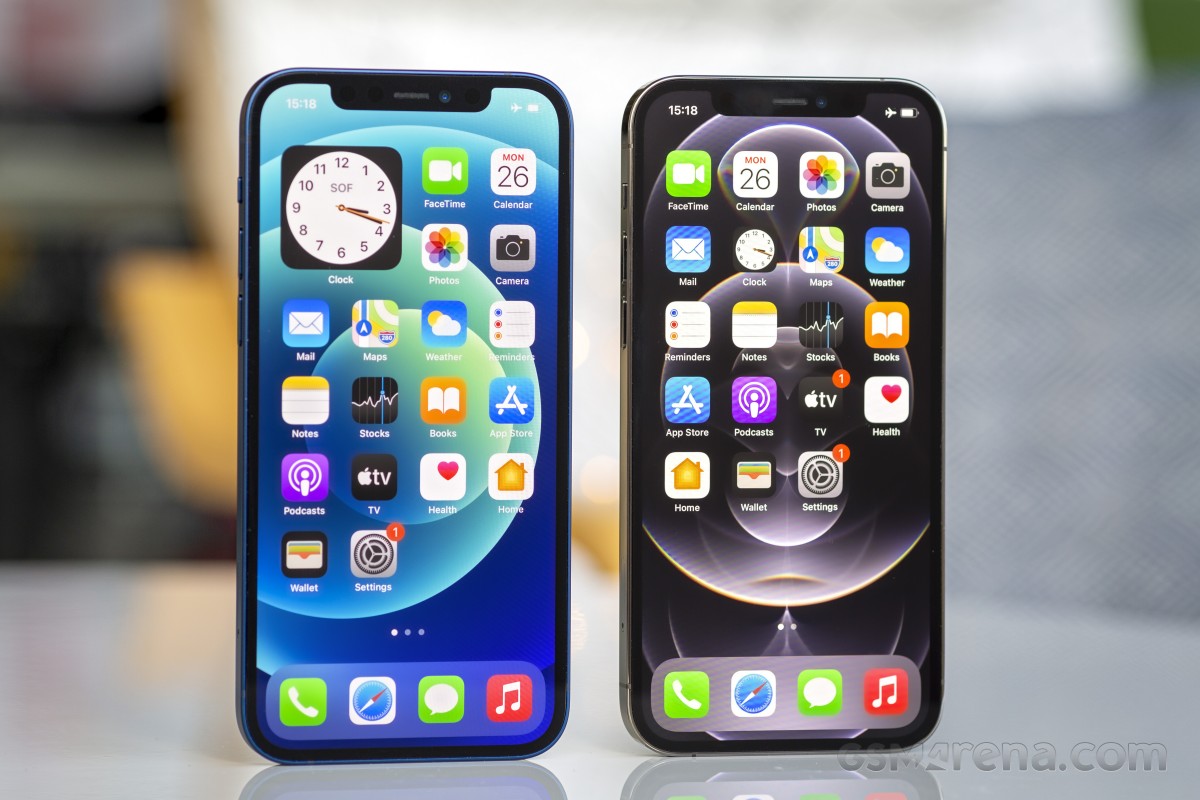 See, Apple has once again partnered with Corning to make the toughest glass on a phone, and they call it the Ceramic Shield. The maker has added microscopic ceramic crystals into its last year formula, making the new glass up to four times resilient to shattering.

The entire front is covered by this new Ceramic Shield, and it has already demonstrated some impressive survivability in the drop tests, just as Apple promised. The glass is also ion-strengthened for improved scratch-resistance and comes with oleophobic coating for enhanced smudge resistance. 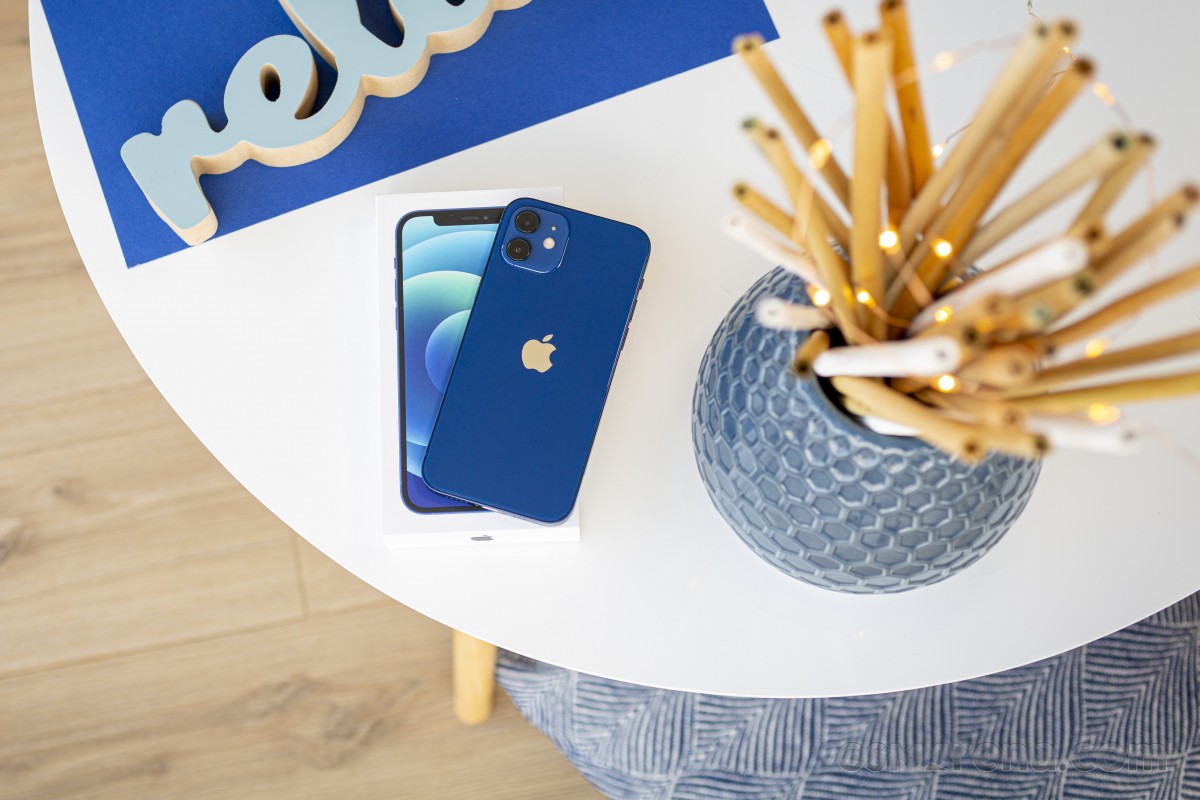 The back panel is probably made by Corning, too, but it's not using the new ceramic formula, and it is not as tough to break as the front. It's no worse than any Gorilla Glass, though, and we'd say that's par for the course.

Flat front, flat rear, and here is the new flat frame. The iPhone 12 has an aluminum frame with a matte finish, and it's painted in one of the five available colors - black, blue, green, red, or white. There are no sharp edges on the frame - the transition towards the glass sides is incredibly smooth. 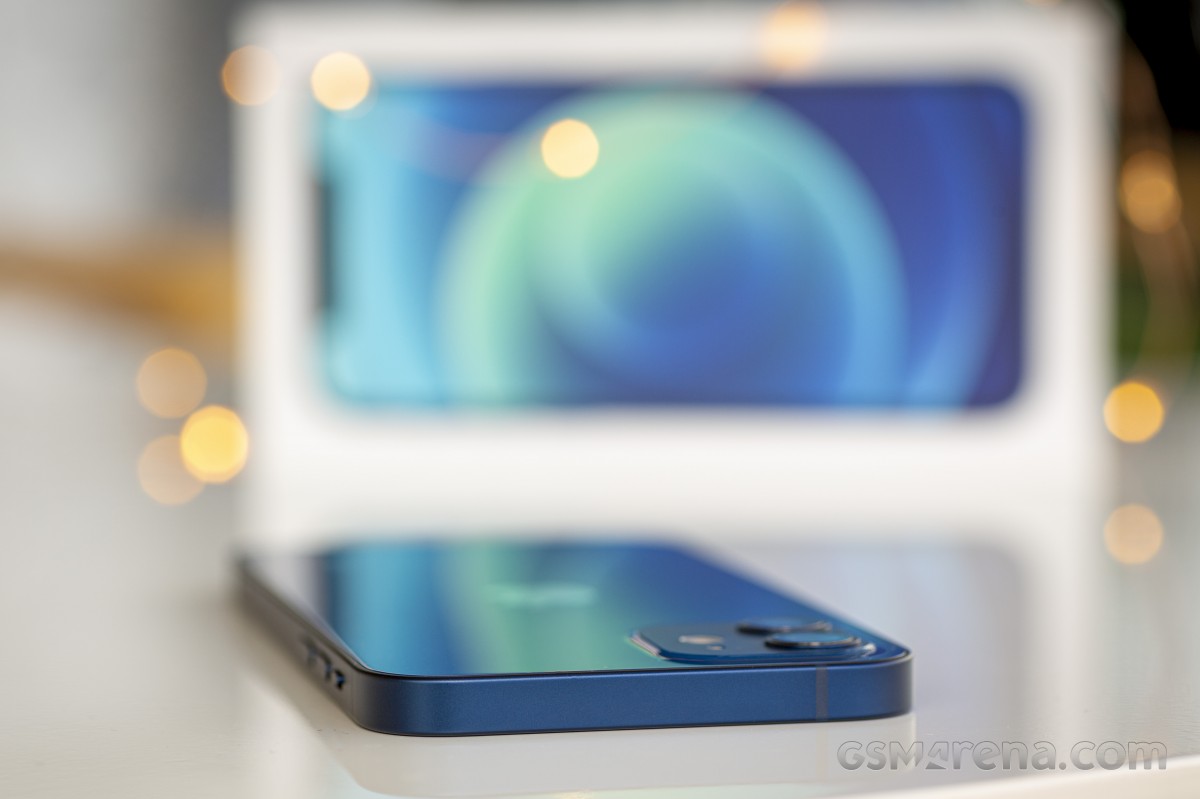 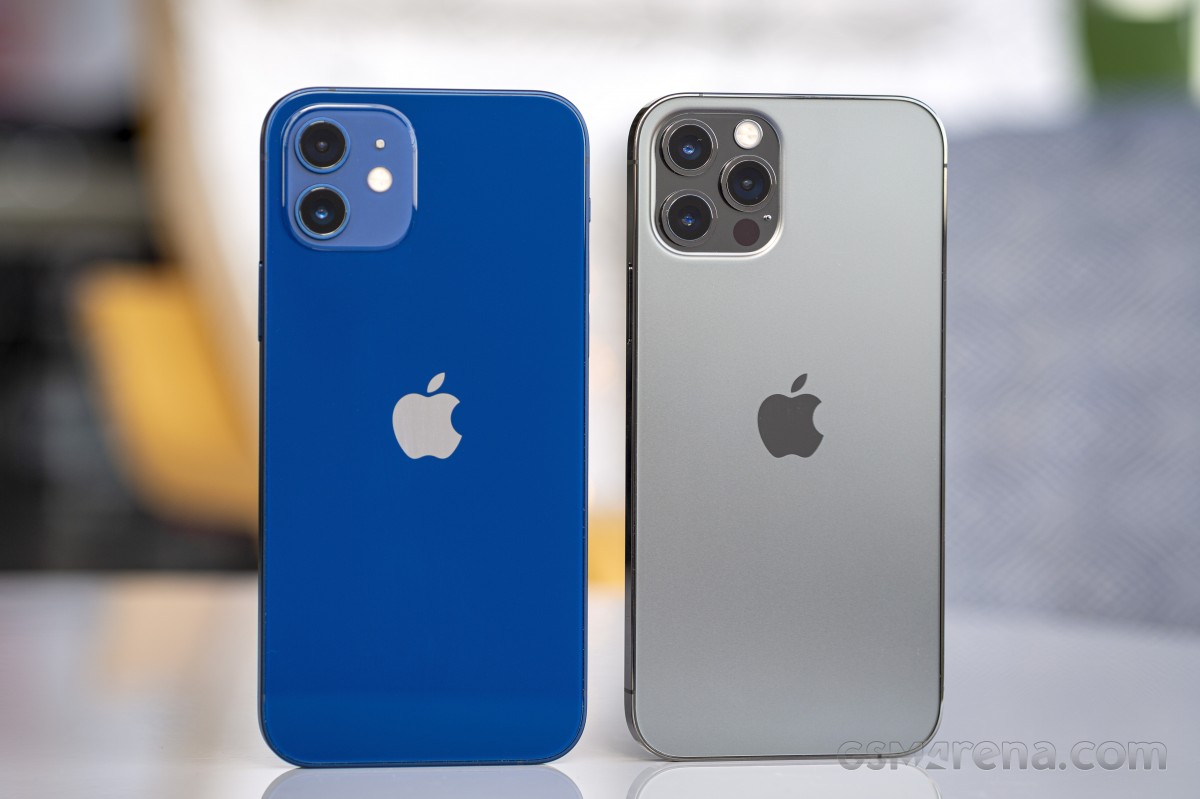 Something your eyes cannot see, but still important, is the improved water endurance. The iPhone 12 is IP68-rated for dust and water resistance, and as per the official specs, it can survive in up to 6-meters deep water for 30 minutes.

The iPhone 12 is incredibly lightweight, and yet it is one of the toughest non-rugged phones out there. And we can only praise Apple for making this possible. 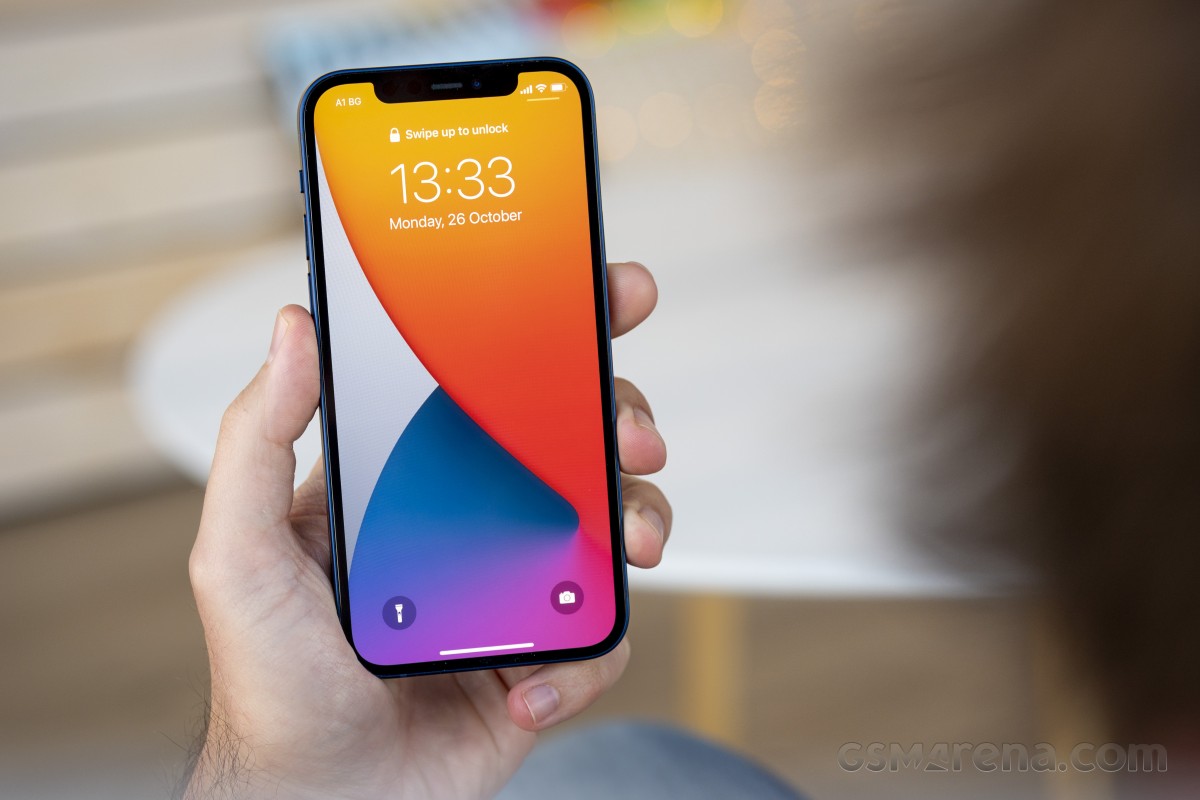 Let's take a closer look at the front now. The iPhone 12 comes with a 6.1" OLED screen of higher resolution and thinner bezels than the iPhone 11. The eyesore notch is here to stay for another generation, and its size remains the same as before. 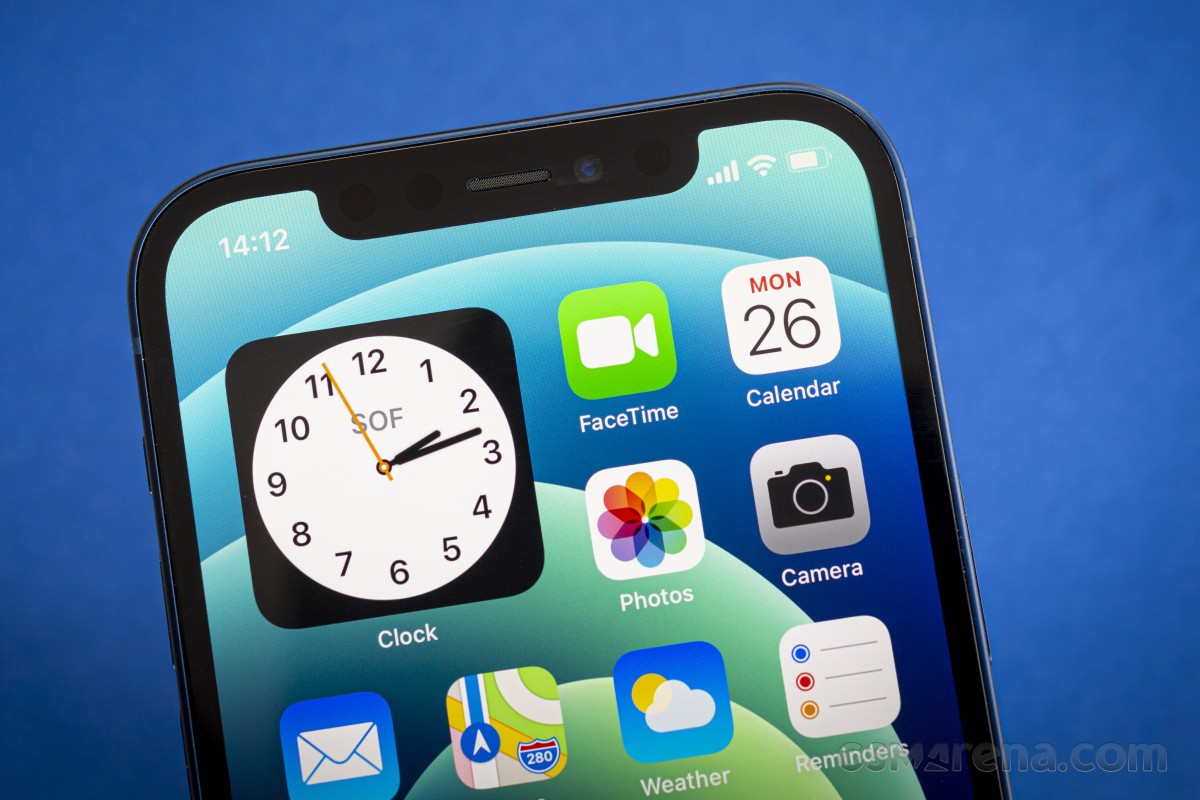 The new OLED screen has a higher resolution, now making for 460ppi - up from 326ppi on the iPhone 11. The screen borders do look about 20% thinner, too.

The notch contains the 12MP selfies camera and the structured-light 3D camera. The earpiece, which also doubles as a stereo speaker, is between those two and the proximity sensor. 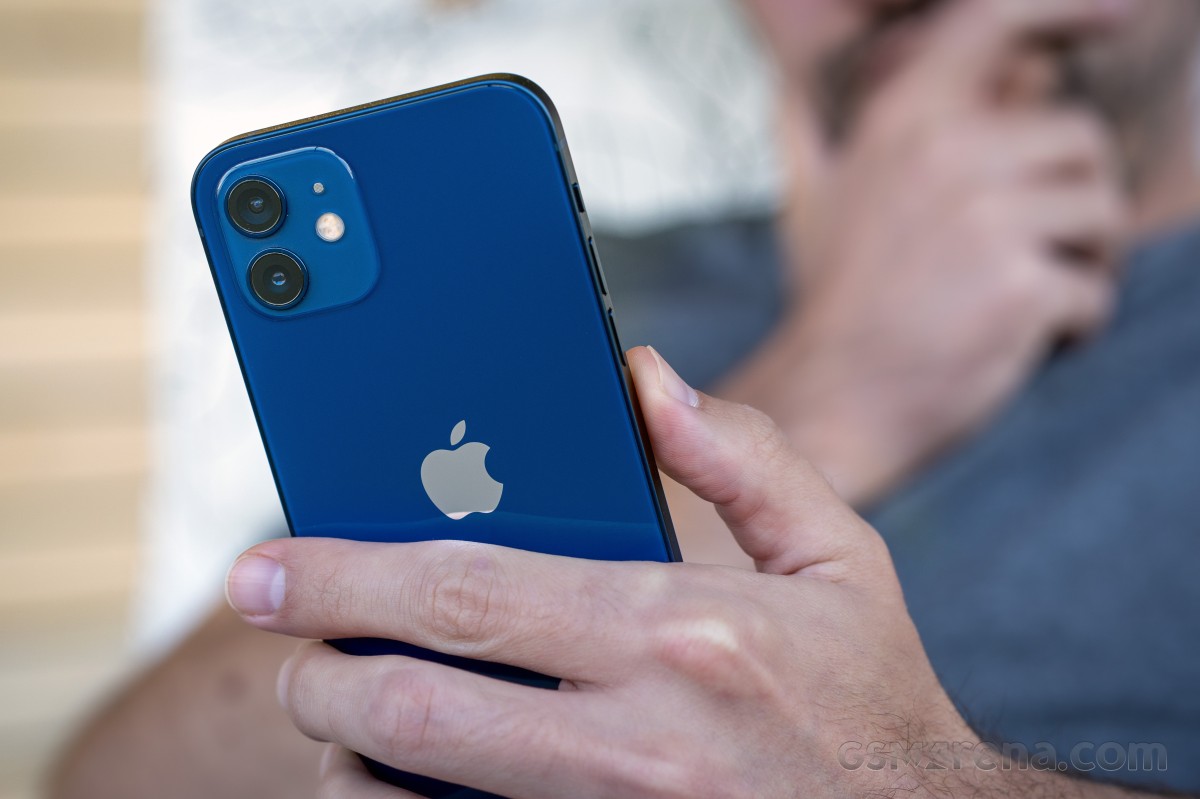 On the back, you'll see the dual-camera setup. It's contained within a matte square glass and is jutting out no more than 1mm from the rear panel. Inside are the 12MP ultrawide shooter and the 12MP primary camera, as well as the dual-LED flash and a stereo mic.

Both snappers are surrounded with metal rings and protected by sapphire glass. These metal confinements are sitting 1mm higher than the squarish matt glass. 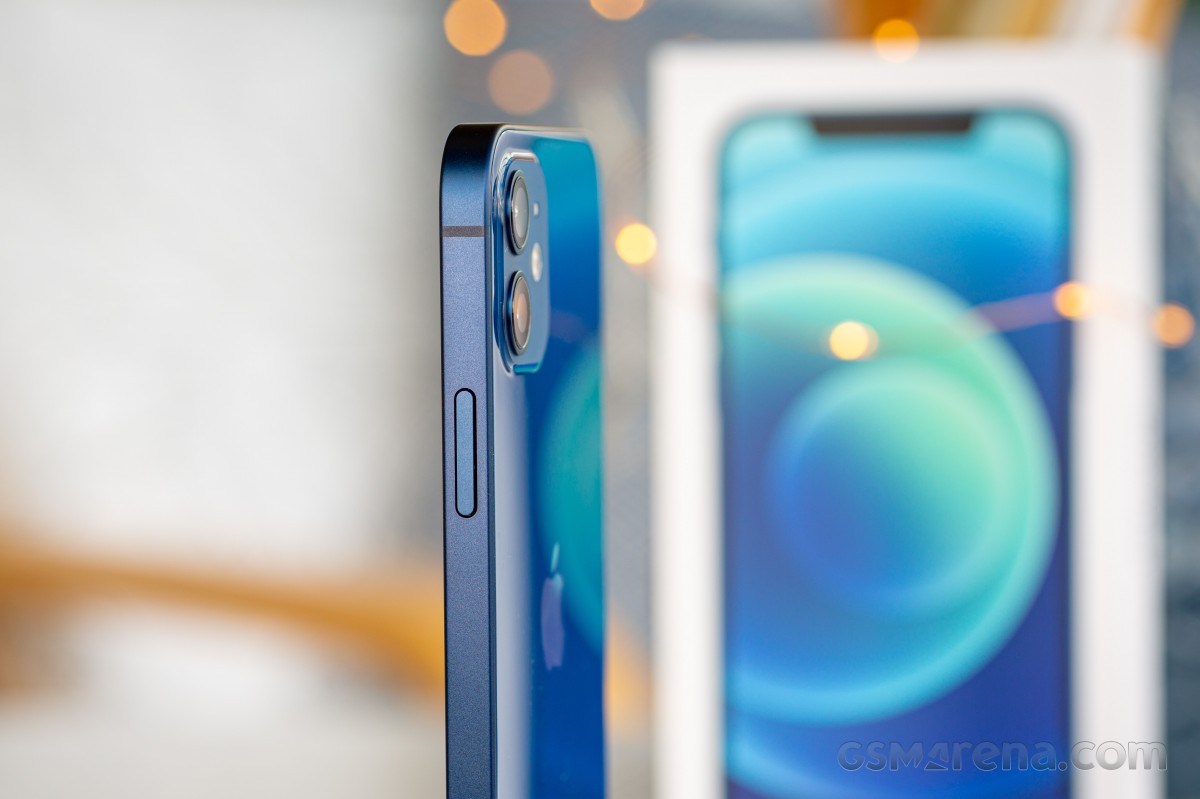 The whole camera piece isn't making the iPhone 12 wobble much on a desk, at least not as many of the most recent Android phones or, say, the iPhone X.

And for the love of God, do not stack iPhones or put any iPhone on another phone - if you are using it case-free. Its camera's sapphire glass will scratch that (i)phone or glass, and it won't be pretty. Be warned! 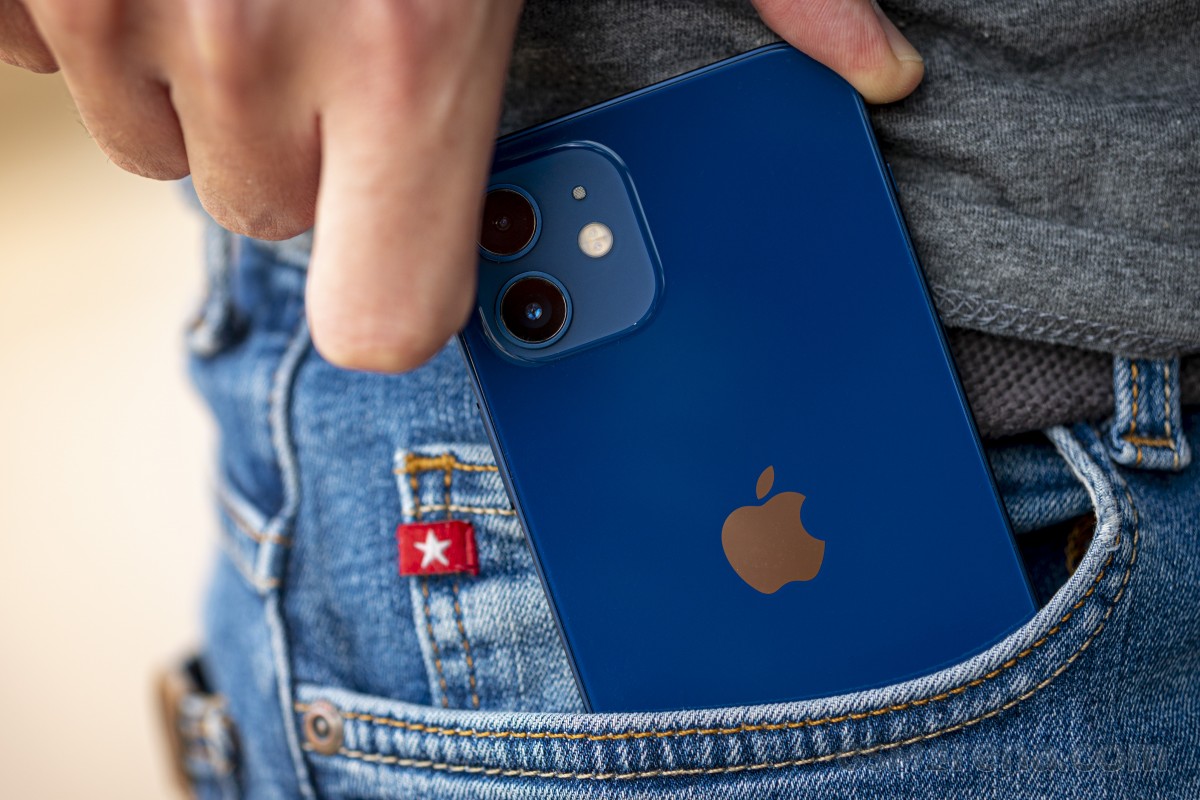 You can have the back panel painted in black, blue, green, red, or white, and all of those are glossy options. Fingerprint smudges are abundant, but thanks to the oleophobic coating - those are gone with just a quick wipe. If they still bother you - then the white model should be the one with the least noticeable smudges.

All new iPhones come with MageSafe compatibility for accessories and chargers. Thanks to added magnets and metal pieces beneath the rear panel, you can now stick various magnetic cases, wallets, chargers, and whatnot to any of the new iPhone 12 devices. You can't really see the MagSafe parts, but we can confirm it works flawlessly with the new Apple MagSafe wireless charger. 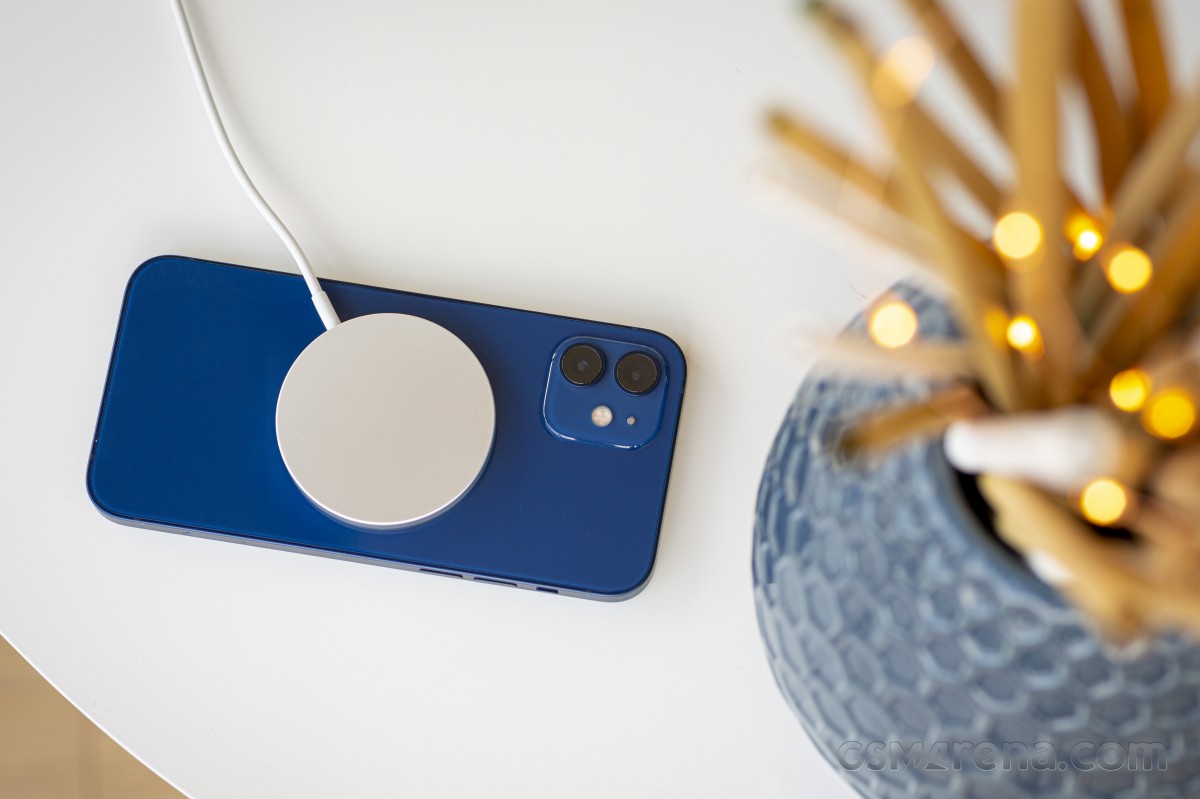 The flat frame has nothing on the top, while the bottom is where you'd find the mouthpiece, the Lightning port, and the other stereo speaker. We couldn't but notice the silver screws, which, visually, stick out too much on the blue frame. 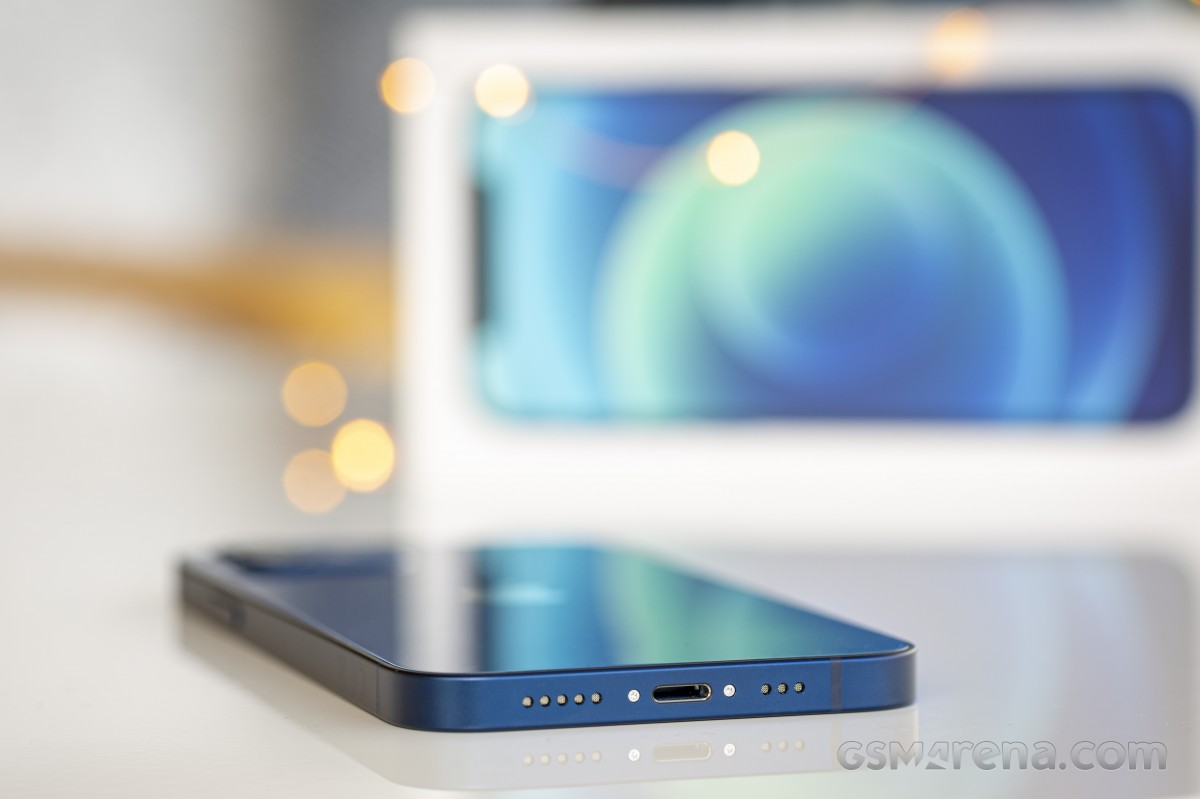 The left side contains the silencer, the volume switch, and the nano-SIM slot. On the right, you'll find the lonely Power/Side key. 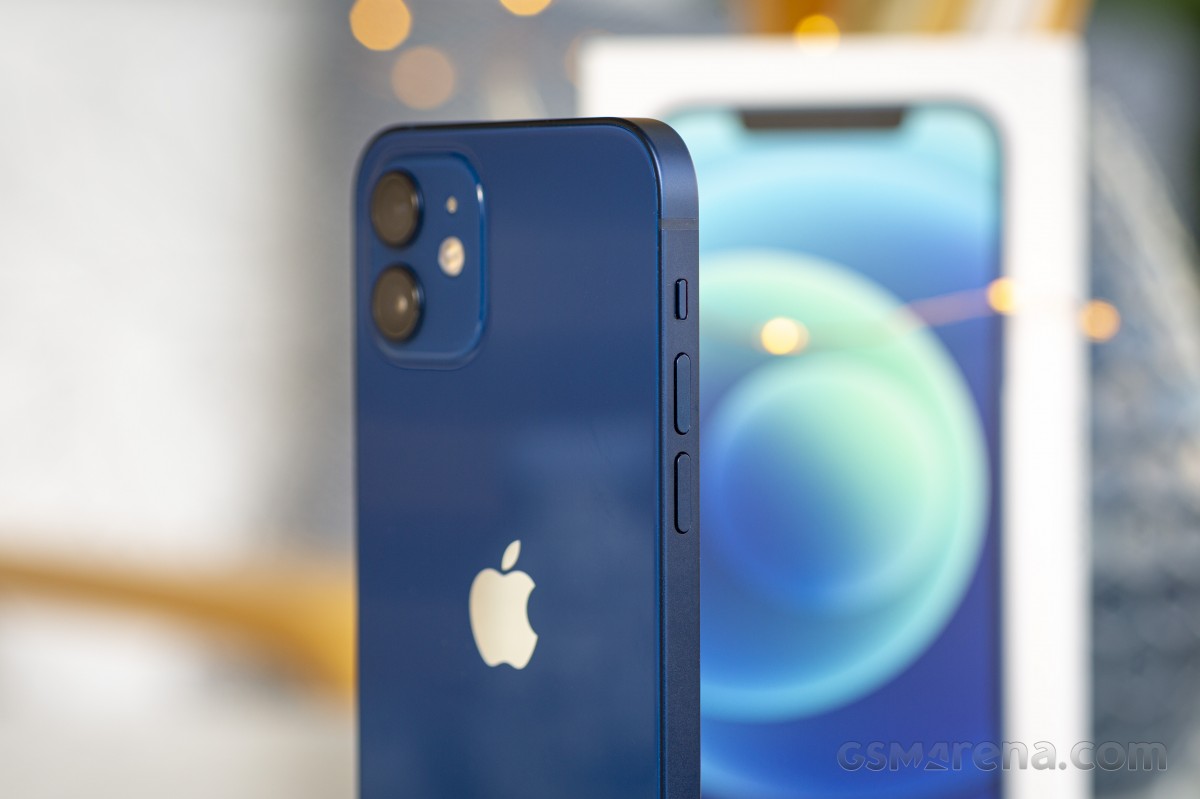 There are some reports of paint chipping on the aluminum frames of the iPhone 12. The iPhone 5 back in 2012 suffered the same issues, and the problem was later rectified in the design of the iPhone 5s that came a year later. While we didn't have any problems with our unit just yet, we sure hope history doesn't repeat itself. 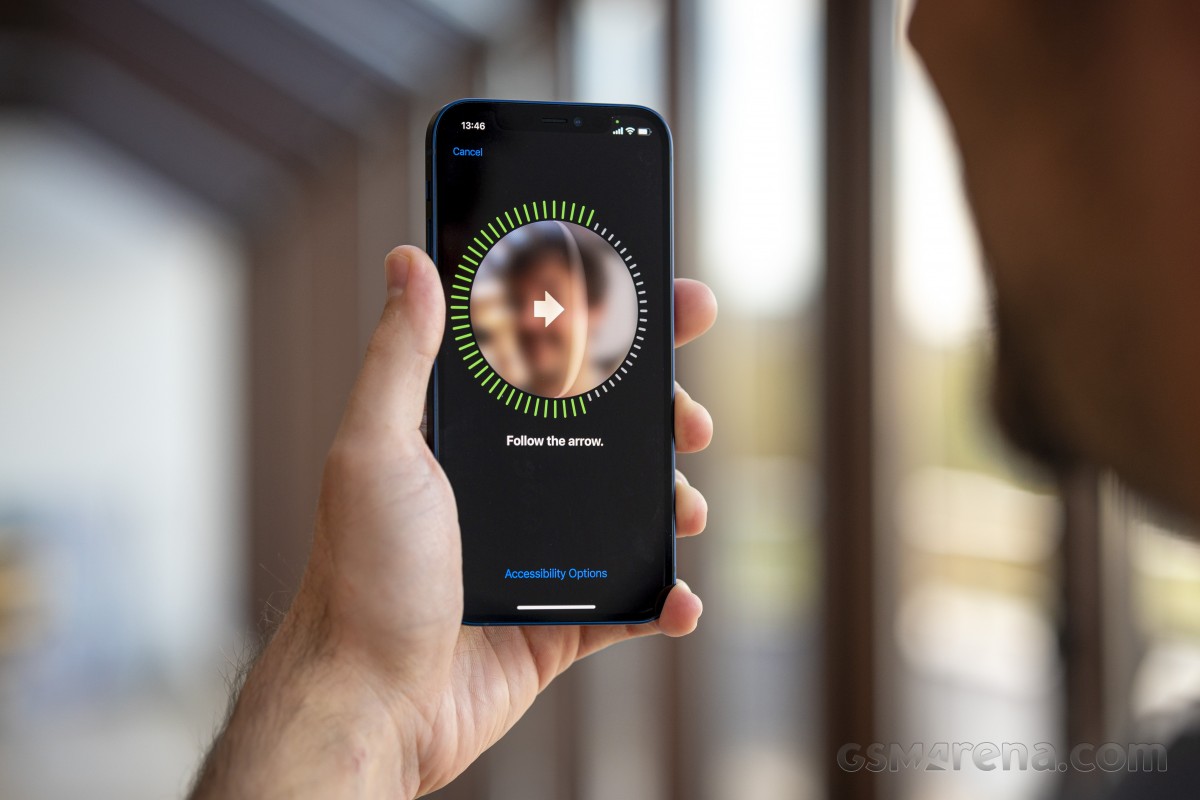 The iPhone 12 fits very well in hand - it is a real pleasure to work with. The phone is comfortable and light. It also has a good grip thanks to the new shape, the matte frame, and the grippy panels. It is a massive improvement over the iPhone 11 Series, and we love working with it. 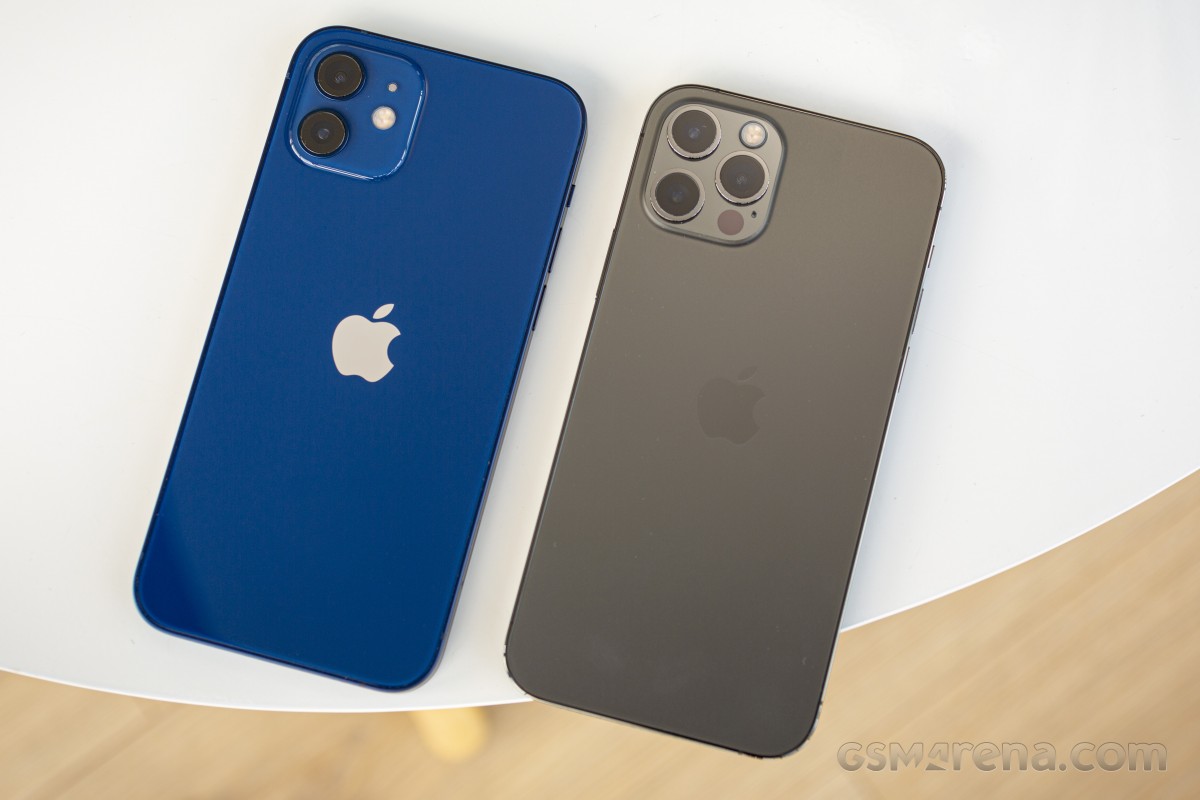 While both iPhone 12 and 12 Pro are similar in size, the 12 is 25g lighter than the 12 Pro. Apparently, the extra hardware there takes its toll.