Photo Stream shares photos with the people you care for

A year ago Apple added Photo Stream to iOS, letting users sync pictures taken with the phone with all of their iCloud-compatible devices. Now in iOS 6 there's Shared Photo Stream, which acts like a social sub-network, built right into the Photos app.

You can also add comments and like pictures in Photo Stream.

Otherwise the Photos app is all but the same. The main album is the Camera Roll, which houses all of the pictures you have taken. You can sort any of these pictures in albums, which are created with the + symbol at the top of the albums view.

The new aspect of the iPhone 5's display shows more of the photos in fullscreen, without the need to crop them. Colors look better, the image is sharper and zooming in and out is much faster.

There's Facebook integration in Photos now, meaning you can post pictures directly to the social network. The sharing menu has also been slightly overhauled - AirPrint is available straight through the sharing options so you can now easily send pictures to AirPrint-compatible printers. The Use as Wallpaper option has a new icon and there's a new Copy icon too.

Marking photos is pretty much the same affair as before. With iOS 6 you can share photos directly to Facebook from the Photo gallery. You can also arrange the photos in albums.

Sharing a photo to Facebook is done via the same pop up window we saw in the Notifications. You still get to choose who can view the picture and decide whether you want to add a location to the post.

The photo editor enables rotation, cropping, and red-eye removal. There's also an option called Enhance over which you have no control - it's all automatic and usually, the results are surprisingly good. In Edit mode four keys appear at the bottom for the available editing options.

You can auto enhance photos, crop freely or select an aspect ratio you wish to crop the photo to.

You can also trim videos.

The Music player in iOS 6 has retained its functionality but now comes in a lighter finish. Menus are light grey and the tabs at the bottom are slightly redesigned.

You can create playlists, delete songs right from within the player and reorder tabs whichever way you like.

Cover Flow is still there - you access it by flipping the device landscape. It lists all the covers to the albums you have in your library. Tapping on an album thumb lists all the tracks in it.

The Now Playing screen hasn't changed in functionality but the color theme is different. The repeat and shuffle toggles are no longer blue, instead Apple chose to make them orange.

Settings haven't budged an inch, which we find disappointing. Even in its sixth major iteration iOS still fails to offer configurable equalizers.

The video player on iOS 6 looks and acts the same way it did in iOS 5. It has a pretty simple interface, you get a scrollable timeline, a Fullscreen toggle, which removes the black bars around the video but crops some of the pixels along the way.

Watching 16:9 aspect movies is a more enjoyable experience now on the iPhone 5 since its 4" screen has shifted to the popular aspect.

At the bottom there's the all too familiar volume toggle with play/pause and skip controls.

The player doesn't have DivX and XviD support. You get H.264, mov, MPEG-4 and M-JPEG support, but no avi files are playable. To play those, you can either have iTunes convert them beforehand or just download a third-party video player off the AppStore, which can play them.

Surpringly enough, the iPhone 5 audio output was a tad worse than that of the iPhone 4S. Obviously the ultra compact body demanded some compromises be made. The good news is that even though the iPhone 5 fails to match the performance of its predecessor, it still remains one of the best performers on the market.

In the first trial (connected to an active external amplifier), the iPhone 5 did quite well, though not quite perfectly. The frequency response has some deviations at the high end of the spectrum and the stereo crosstalk levels are only average for this part of the test. Neither of these is anything to worry about, but it's not quite what we've come to expect from Apple. Volume levels on the iPhone 5, even though lower than those of the 4S, are still well above average.

The second part of our test told a similar story - the iPhone 5 is a great performer, but not quite as good as the iPhone 4S. It had higher intermodulation distortion levels, more stereo crosstalk and lower volume levels. So while last year Apple's flagship smartphone did easy work of the competition, the iPhone 5 got the victory by the skin of its teeth. 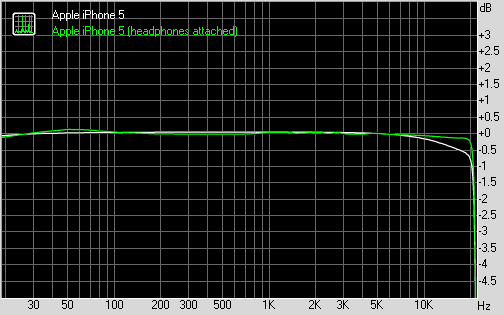