Maps got a lot of bad rep these days

The iPhone 5 comes with Apple's new mapping service along with voice-guided navigation, courtesy of Siri, faster vector graphics, a cool 3D Flyover mode but and a long list of missing or otherwise not very functional shortcomings..

An assortment of sat-nav apps has long been available in the app store (for a fee), with no other than TomTom having a prominent place on the list. They now supply the maps for Apple's own service, which comes with turn-by-turn voice guidance, real-time traffic updates, local search, Yelp reviews and the impressive Flyover 3D views.

The navigation will work even on the lockscreen or in the background. Real-time traffic reports are available and Apple is also sourcing the live traffic info anonymously from iOS users on the road. Sadly, there isn't an option to pre-cache maps for offline use, which can be a problem if you need guidance abroad.

The 3D Flyover mode is a great bonus for your viewing pleasure. When you enable the 3D view (outside navigation) you will be able to explore cityscapes from birds-eye view. The currently available selection is extremely limited, but hopefully more areas will be added later on. You can zoom, tilt and rotate using two-finger gestures to explore 3D landmarks rendered in real time.

However, the map coverage seems to be a weak points of the new maps app. Users and early access developers have repeatedly expressed their discontent with the new Maps - addresses turn out either wrong or unavailable, there's a lack of transit information, POIs are all messed up, and there is no Street View, etc. Apple's move to replace Google as their maps provider is a surly bold and it's clear Apple has a lot more work to do in this department.

Currently there are apps, which Apple has allowed to integrate with maps, which provide transit information. They are city-dependent and not available everywhere. Furthermore those apps aren't really integrated into Maps - when you choose an app to help you with public transit you're taken away from Maps and into the new app, which isn't ideal.

And users need to understand that Apple and Google's relationship has been going downhill for some time now. Google Maps on iOS was severely lacking behind the competing Android application, where features such as vector graphics, turn-by-turn navigation and offline caching have long been available.

With iOS 6 Apple has updated the App Store and iTunes Store and content handling. Both stores have different Featured pages with scrollable rows rather than lists. The paintjob was changed too.

In addition to the added eye-candy, the App Store now has a slightly different manner of operation. Firstly, you won't be prompted to enter your password when you just update apps. Secondly, you can see the change log in the Updates screen without actually opening the info screen.

We're not really sure about the side-scrollable thumbnails of apps. They take up the entire screen, meaning you can only see one app at a time, which isn't the most space-efficient solution.

There's now an All Categories toggle in the top left corner. The Categories tab at the bottom has been replaced with Genius, which lists apps you might like on the basis of the apps you've already purchased or downloaded.

When you're looking at an app you get more information, too. Facebook reviews are integrated, you can see more apps from the same developer too.

The top in app purchases screen is here as well.

As usual you can view all the apps you've bought on your current iDevice or previous ones through the Purchased menu in the Update tab. iCloud plays a key part here - all of your purchased apps from each device show up and are ready for download.

Finally, after you buy or update apps you will no longer be kicked back to the homescreen - you can continue browsing the store. You can launch apps you've already installed from within the store too.

The iTunes store has also been slightly changed. Instead of a vertical grid of suggestions you now get side-scrollable categories, like New & Noteworthy, etc.

The new interface is way cleaner with a more images. Facebook reviews are available here too so you can check out what people are saying about an album, movie, etc. You can also preview just about everything. Ringtones, alert tones, movies, etc. can all be checked out or listened to before you buy.

Music syncing is probably the trickiest part of the iCloud sync. Along with the tracks purchased from the iTunes store you surely have a collection of your own that you sync with your iOS device via iTunes. Well, Apple is now offering a service to sync both collections in one place.

The music you've purchased at the iTunes Store will be easy to sync automatically across all your iGadgets. But you will need to use the iTunes Match service for the rest of your music collection if you want it synced too.

iTunes Match will scan your collection on the computer and check for matches with songs in the Apple's iTunes Store (currently 18+ million songs and growing). If there is a match, the iTunes song will be synced, if not - well, Apple will upload this song on their servers and then sync. Pretty cool, isn't it?

So iTunes scans yours songs and pushes them to all your other devices if they match. If some of your tracks are of lower bitrate than 256Kbps, the iTunes Store will replace them with higher quality (320Kbps). The iTunes Match service costs $25 a year and will be first available in the US.

The new App and iTunes store redesigns really come into their own on the iPad's 9.7" screen and look slightly stacked on the iPhone. Perhaps the most obvious example of this is found when you search for apps. Apple could've simply used a smaller grid of apps instead of just one app per screen on the iPhone (and about six on the iPad).

iCloud syncs with all your devices

iCloud was an integral part of iOS 5 and is present here in iOS 6 on the iPhone 5. It syncs all of your important data between all of your devices running iOS 5 or above.

You get 5 GB of free storage but you can buy more if you want. Selecting which apps to sync is pretty easy. iCloud even remembers each device you've backed up so you can restore them separately if you wish. You can naturally delete older backups to free up space.

Apple knows exactly what apps you've purchased, what you have installed on an iDevice and what you've deleted for some reason. Apple knows this for each one of your iDevices.

So if you chose to sync with iCloud, Apple will sync only the app's personal data, not the entire IPA file (as iTunes did). Here is an example:

You have Angry Birds installed on your iPhone. It has a save data of 50.5MB. Apple will sync only this file. If you delete the game and later install it again (free, from the Purchased list), your iPhone will download the original IPA from the App Store and will get back this 1.5MB file too - a lot more natural process to sync an app rather than keeping the whole image. If you use an app as USB storage (Filer or even CineXPlayer), then, by default,the whole content will be backed up too, eating your backup quote quite fast.

There is one more thing with the iCloud app sync - when you buy a new app, it will be pushed to all of your iDevices automatically (if available and if you have enabled this feature from the AppStore settings).

PassBook not really hitting any buttons yet

The PassBook is a new e-ticket app that handles all kinds of electronic tickets (including boarding passes), loyalty cards, coupons, etc. It's Apple's answer to apps like Google Wallet but without the additional NFC support.

The location-aware app makes the right coupon available in the right place and at the right time. The PassBook will report the balance on coupons and cards, let you check your ticket seats and can even show you relevant notifications (e.g. gate or terminal change for a flight).

Currently developers are still scrambling to offer Passbook-supported coupons, tickets, vouchers, etc. There's a rather limited selection of Passbook-supported apps in the App Store, but at least those are easily accessible, though the dedicated button in the app.

Perhaps this is the part Apple put most effort in. Many are probably put off by the dependence on iTunes. Well, Apple has finally made this a lot easier.

You no longer need a computer to activate your iGadget. The moment you turn on your iPhone/iPad/iPod Touch for the first time, you can do the activation and setup process right from your device (a network connection is required of course). After a few simple steps, quite similar to Android's initiation process, you are good to go.

Updating your iPhone is mostly done over the air now. The option is located under Settings->General->Software Update. Of course, you can still use iTunes on your Mac/PC to do that if your Wi-Fi connection is too slow.

And thanks to the use of Delta encoding, the updates will now come with a much smaller footprint than before when they carried a whole system image. The new update files carry only the bits that need changing. 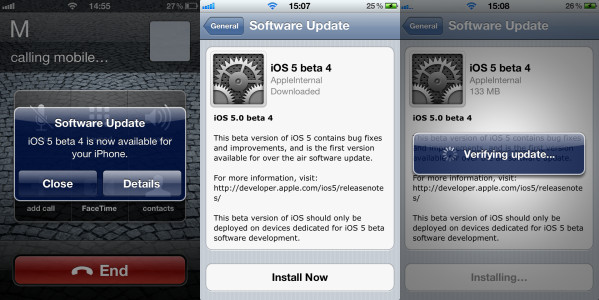