The iPhone 5s brings another change - True Tone flash. It's consists of two LEDs with slightly different colors. This should allow the camera to get a more accurate reading of the colors in the scene.

iOS 7 brings a brand new camera interface with some cosmetic changes (it's flat) and it's more usable. You still get two columns of controls - effects, shutter key, gallery shortcut/last image preview on the right and front/back camera toggle, HDR mode and flash mode on the left.

This gives you access to the basic options, but the mode switching has been moved to a swipe gesture. Starting at the default photo mode, square photo and panorama are in one direction video and slo-mo video in the other.

Square photographs have, of course, been popularized by Instagram and so have photo effects. The iPhone 5s can display a grid of 3 x 3 effects in real time to help you pick the one that's appropriate for the scene. The available effects are Mono, Tonal, Noir, Fade, Chrome, Process, Transfer and Instant. These work with the front-facing camera for selfies too.

The camera supports AF/AE lock as usual with tap and hold on the viewfinder - this can be of great help with tricky scenes. There's a geo-tagging option but no resolution settings as usual. Still, we like the balance the iOS 7 camera finds - almost everything is one tap/swipe away and you get all the options you need for daily smartphone photography. The manual settings of the likes of the Nokia Lumia 1020 are alluring for some creative shots, but most users shoot at full auto.

Time to go over the image quality, we'll also bring in some iPhone 5 photos to see if there's actual progress. iPhone photos have been some of the best in the business for a few years now and the iPhone 5s is no exception.

The image processing is nicely mature, bringing noise levels down without sacrificing much high-frequency detail. And there is plenty of detail, great for an 8MP shooter. The 5MP difference between it and 13MP Androids isn't very pronounced. And that's without signs of too much sharpening, something quite a few Androids are guilty of.

The color rendering settings have been changed - the white balance is now noticeably warmer. The iPhone 5s also exposes shots slightly higher, retaining detail in the highlights at the expense of shadows, which contributes to the different look.

We also tried out the new HDR panorama mode, which turns in spotless stitching when there are no moving objects. It also handles bright highlights and dark shadows in the same shot quite well, the only downside is that some areas can look a little washed out. Also, it only does around 180° rather than a full circle. The resolution is impressive high though and there's lots of detail all around.

A panorama shot with the iPhone 5s

We won't do a detailed shootout, but we'll point out the differences that caught our eye. The iPhone 5S shots are sharper, though the difference is minor. Pixel peepers will spot it, while those that only upload downsampled shots to social networks might never know about it.

The iPhone 5s tends to expose shots slightly higher, but it doesn't use longer shutter speeds or higher ISO settings compared to the iPhone 5 - instead it leverages on the wider aperture that lets more light in. The iPhone 5s also has slightly wider dynamic range than its predecessor thanks to its larger sensor, although the difference is, once again, pretty minor. 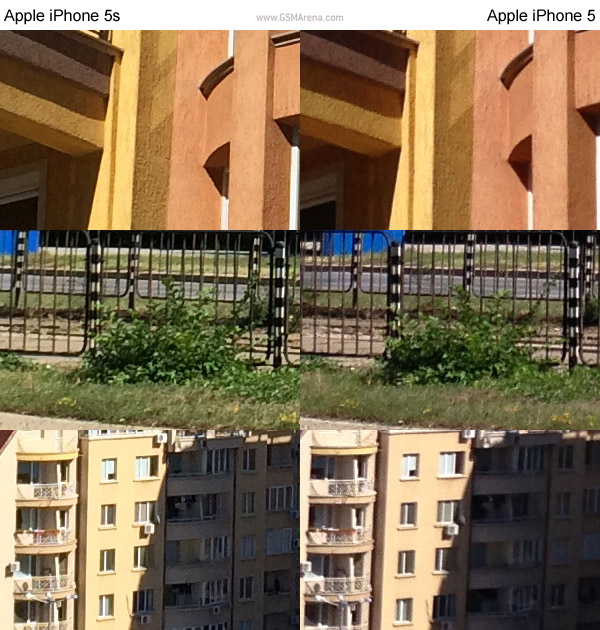 The one thing we'd criticize the iPhone 5s here is that the warmer white balance gives photos a noticeable yellow tint but the good thing is saturation has been toned down to more realistic levels. The iPhone 5, which was running iOS 7 too, has a more neutral white balance, though it has its own issues (the grey asphalt looks reddish). 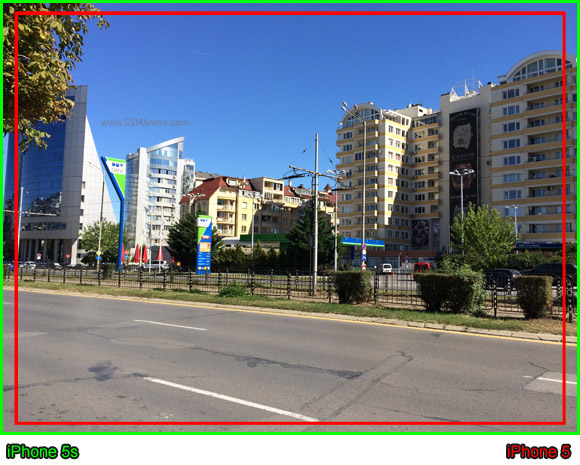 We took both iPhones to a dark room to snap a photo - our intention was to check if the new flash really does allow for more accurate colors, but the result was quite surprising. Both phones did a 1/16s exposure but the iPhone 5s shot at ISO 100, while the old model did ISO 200. And the difference is noticeable, whether it's having a second LED flash, a wider aperture and a bigger sensor or a combination of those things, the iPhone 5s shows a much improved low-light shooting capabilities.

The photos have a yellow tint though, which may not surprising given the daylight shots, but those promises for improved color accuracy didn't pan out. 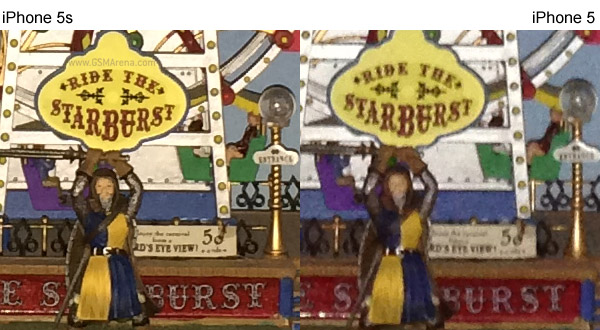 Of course, you can check out how the iPhone 5s does on our three standard charts against its predecessor and all the other phones in our database.

iPhone 5s vs. iPhone 5 in our photo quality comparison tool

The iPhone 5s camera records 1080p video at 30fps, which is the most popular option at the moment but we're already seeing UHD videos and 1080p @ 60fps. The iPhone 5s does have a high framerate mode, 720p @ 120fps, which is used for slow motion videos.

The standard 1080p @ 30fps videos are captured at 17Mbps bitrate, which is about the average for Androids too. Most disappointingly, the iPhone 5s continues to capture mono sound (64Kbps, 44.1kHz) just like its predecessor, which bewilders us now as it did then - both phones have multiple mics, so it's really disappointing that Apple didn't put them to use.

You can snap a photo during video recording, but that comes out with 1080p resolution and are barely any better than grabbing a frame from the video. The only difference is that those shots have the same FoV as the still camera, while the video itself has much narrower viewing angle due to the way the iPhone 5s stabilization works.

The video quality is excellent - videos are smooth, have no noticeable noise and plenty of detail. The videos carry over the warmer white balance and slightly oversaturated colors of the still photos, but there's no pixilation, oversharpening or jumpy continuous autofocus, which are our most common complaints for other phones.

Slo-mo videos are shot at 720p resolution and 120fps frame rate, which can give you a 4x slowdown. The bitrate jumps to a hefty 30Mbps, which suggests Apple picked 17Mbps for regular videos with storage in mind (and those certainly don't suffer from low bitrate).

Anyway, one thing we noticed is that the phone does a cool-looking ramp up effect where time runs normally and then smoothly transitions to 4x slowdown. The videos themselves are at 4x slowdown the whole time so you lose the great effect if you download the video to a computer or share it on YouTube.

We re-encoded one video to 30fps to show you what the slo-mo looks like, but bear in mind that due to the extra re-encoding step the quality has been degraded a bit. You can download the original video here - 720p @ 120fps (8MB). You'll need a player capable of reducing the framerate to experience the slowdown, the video itself runs in realtime.

We also tested the video stabilization of the iPhone - it's a software stabilization, there are no special hardware components. We pitted it against the HTC One which has actual optical image stabilization, but the iPhone 5s video actually looks smoother. The trade-off, as we said, is the narrower field of view on the Apple smartphone, but the result is still mightily impressive.

The field of view of the iPhone 5s video camera is a little wider than the one on the iPhone 5, letting you capture a bit more in the frame. The difference is slightly more pronounced than what the still camera showed. 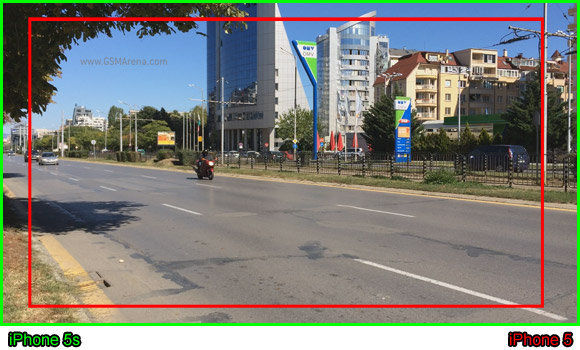 Despite the wider FoV, the new iPhone 5s actually manages to capture more detail - it's not like your iPhone 5 is suddenly junk, but there is definitely a difference if you look at the two videos up close (it's easiest to see in foliage). The videos have a warner white balance once again. 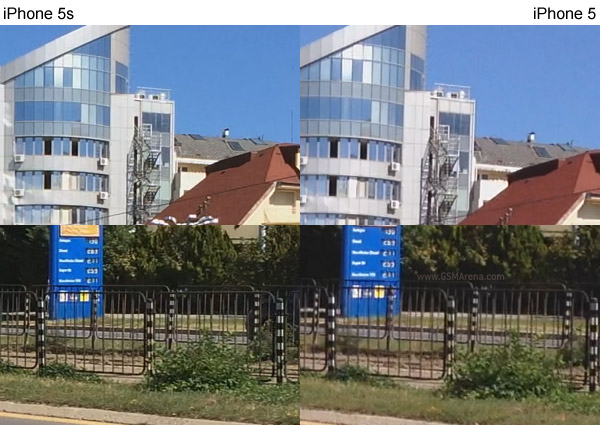 Our video compare tool is another great place to check for differences in video quality between the iPhone 5s and last year's model. There are plenty of droids to throw it against too.

iPhone 5s vs. iPhone 5 in our video quality comparison tool