We started this review with a rant we had been holding in for a while. Having gone all the way, we got to see a better side to the iPhone 6, inevitably warming up to it. What these few days didn't change however is how we feel about Apple's way of doing business.

You don't have to be an Apple fan to appreciate the iOS experience. But even the most faithful of fans would have probably loved a more feature-rich hardware to enjoy it on. This is an Apple fan speaking by the way.

We can't help the feeling that Apple is holding back with the new features just so they have something to brag about at their next iPhone keynote. Now that the iPhone 6 is six foot tall it could've used some extra muscle.

On its own, the iPhone 6 is a perfectly executed product. Made of high quality materials, fast, capable, fluid, impressive in many ways. Apple surely knows how to make class-leading devices. It's just that they don't like to push the envelope - well, to be fair, it's worked just fine for them so far. They like to keep a stash of upgrades ready for introduction in the years ahead only so they can make sure users will pay for each and every one of those through the nose. 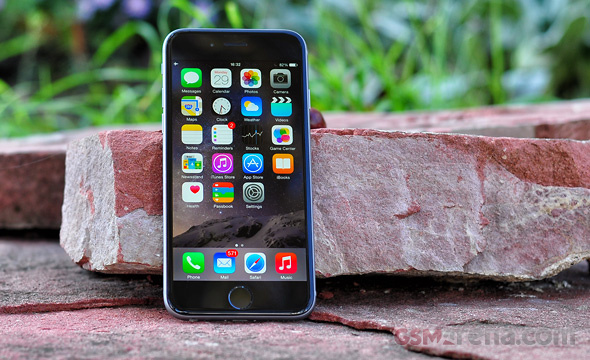 The Apple iPhone 6 is the epitome of that strategy and it shouldn't surprise anyone that we, being the geeks that we are, are in a way disappointed. But examining the iPhone 6 for what it is rather than what we would have liked it to be, draws a more positive picture.

Here are our main test findings in this review.

It shouldn't come as a surprise that there is some rather capable competition to the iPhone 6 from all sides. As usual, most of the phones its size are even better equipped hardware-wise, but that has never bothered Apple. iOS and its powerful app ecosystem (not to mention the reputation) are a powerful leverage that the company is not afraid to use year after year.

So speaking about competition, perhaps the first name that comes to mind is the Samsung Galaxy Alpha - it's par excellence Samsung's answer to the iPhone. A metal frame, a more compact and even slimmer body, the same size screen but of the AMOLED variety and a higher resolution camera. Not to mention the substantially lower price tag. The iPhone 6 will have a hard time with this one.

Sony recently presented their Xperia Z3 compact, a phone that can easily outclass the iPhone in several departments, save for the premium build. Glass and plastic are hardly a match for a metal unibody. The Xperia Z3 Compact is not even trying to come across as more sophisticated than it is. Double the battery life at half the price is one hell of a motto.

The rest of the Android minis may look like a match to the iPhone on the outside (judging by screen size alone), but they are in a different league altogether, so their names are unlikely to come up in the same conversation.

Apple's own however may steal away some of the spotlight from the iPhone 6 (the 5s less so). The iPhone 6 Plus offers everything the iPhone 6 has sans the pocketability but if you are carrying your phone in a purse anyway, you might as well get the bigger screen. The iPhone 6 Plus might be unwieldy but despite its gargantuan proportions, you can't hide the fact that all multimedia content looks even more appealing on a bigger screen - not to mention the added ease of error-free typing.

The iPhone 5s will remain a viable option for a while as well if you can live with the small screen size. After all, it has almost the same camera, almost the same quality screen, almost the same battery life and it's processor is still fast enough. And it gives you access to the same iOS 8 features and the full app catalogue without any hardware restrictions.

As you can see, the iPhone 6 is hardly our sweetheart. It may not be the iPhone we dreamt of, but it's the best iPhone to date and the iOS app ecosystem is just begging for a screen that's bigger than a mere 4 inches. So more than likely, it will be on many people's Christmas wish lists. But if you are looking for the most feature rich hardware package or for the best deal around regardless of OS, then quite possibly, you might just end up spending your money elsewhere. And we wouldn't blame you.