The iPhone 6 comes with the same size camera sensor as the iPhone 5S and the same 8MP resolution that premiered in the Apple lineup way back in the day with the iPhone 4S. However the focus hardware has been improved and along with the updated software that adds up to somewhat better results.

Apple has added what they call focus pixels to the sensor which should make the autofocusing way faster. This is the phase detection pixel technology that we've seen in higher-grade cameras for a while now and the same focusing technology that Samsung premiered in the Galaxy S5 and LG in their G3 (which has and added infrared focusing aid as well).

The more powerful chipset and the new faster focus has enabled Apple to improve the face detection making it faster and more accurate. The auto image stabilization on the Apple iPhone 6 is digital but Apple promises it still does enough to reduce blurring. The panoramas got their resolution boosted and can now be up to 43MP. The new Apple A8 chipset also helps speed the whole thing up - from shot to shot times through HDR images to launching the camera app itself - it's all slightly snappier.

Lastly the front-facing camera is improved as well. Apple claims it captures 81% more light, though we are not sure how that's possible given that it has retained the same F/2.2 aperture, and it will do 10fps burst capture. The front-facing camera even offers HDR video capture, aside from HDR photo capture.

The camera interface is improved, courtesy of iOS 8. If you tap to focus the phone will give you control over exposure through an up and down slider. This way you can cleverly add exposure compensation depending on the scene. You can lock the focus and exposure as well but that isn't new.

Along the left side of the camera viewfinder Apple has added controls for switching to the front-facing camera, setting up a timer (either 3s or 10s), choosing the HDR mode (Auto will choose when to apply the effect, off and on) and finally a settings for the flash (Auto, on or off).

Once you start shooting with the Apple iPhone 6 you'll immediately notice an improvement in speed. The older iPhone 5s is no slouch but the new one feels notably faster. Shot to shot time is impressively fast and HDR photos (when the camera captures and stacks two shots) take just 1s to process.

The dynamic range is great - the brighter and darker parts of the scene have great exposure without the need for HDR. White balance was spot on each time took an image. The iPhone 6 tends to saturate colors over the natural level but we're not taking points away as most cameras oversaturate a little bit and it does add a certain punch to your images. We haven't had issues with blown out colors and lost detail.

Per-pixel detail is impressive for a 8MP camera as is usual for an iPhone. Objects come out incredibly sharp and well detailed. Compared to the iPhone 5s the corner sharpness has been improved and now offers as much resolved detail as the central part of the image.

It needs to be said that the Apple iPhone 6 focus didn't seemed to miss at all - every photo came out sharp and detailed. Focusing is noticeably faster compared to the iPhone 5s, too.

The fast autofocus performed equally well when we tested the iPhone 6 up close and personal to subjects. Macro samples came out sharp with good detail.

The HDR mode on the Apple iPhone 6 captures two images and stacks them together in order to obtain a well-exposed shot with a wider dynamic range. The Apple iPhone 6 started off with an impressive dynamic range to boot but the HDR samples didn't really help it enough with exposing the difficult scene.

It seems the iPhone 6 leaves the shadows as they are and tries to recover some of the lost detail in the highlights, just like its predecessor. The HDR effect is very subtle and we would've liked it to be a little more prominent. 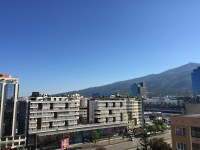 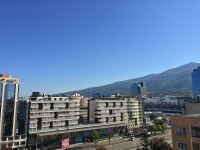 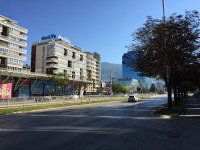 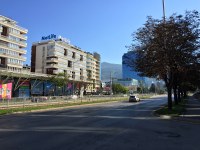 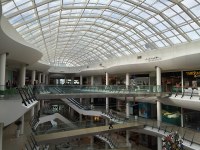 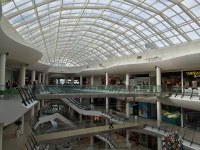 Apple iPhone 6 HDR Off * HDR On

Apple has improved on the low light imaging with the new iPhone. The phone isn't afraid to go for a lower shutter speed so night shots get better exposure. The ISO is lower this way too, but you do risk getting blurry images due to either camera shake or your subject moving too quickly. While the 5s won't automatically choose shutter speeds below 1/30s, the iPhone 6 would go as low as 1/15s.

The images below are shot at 1/15s and ISO 320 and 1/15s at ISO 250 and offer pretty good quality given the little available light. As we said though - at shutter speeds like that, you won't be so lucky every time. 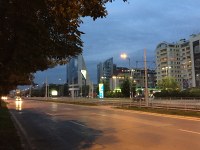 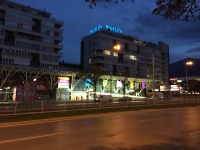 Apple iPhones have for some time now produced excellent panoramas, some of the best in the mobile world in fact. The stitching is great with no visible tearing in the picture and the dynamic exposure helps to avoid blown-out parts of the scene. Not to mention that the process of taking them is impressively user friendly - almost like shooting a video.

The iPhone 6 can capture panoramas with a maximum resolution of 43MP bringing a huge improvement over the already-great iPhone 5s panoramas. Here goes a sample.

We've enrolled the Apple iPhone 6 in our photo quality comparison tool. You can compare samples with any camera in our database and see how the new Apple flagship fares in sharpness, resolution, color reproduction and detail.

Since Apple didn't bother increasing the resolution iPhone 5s owners might be wondering if the camera is worth the upgrade. The 5s is already pretty great so let's see how it compares to the new iPhone 6.

We've prepared a number of 100% resolution crops for you to check out and we'll be walking you through the process as we go along.

First off we're looking at a photo captured in good light. The two crops the left compare the resolved detail, which is a little superior in the case of the Apple iPhone 6 - even more so in the corners. On the right you can see the slightly better dynamic range coming from the newer iPhone 6.

The colored surface on the right represents the overexposed parts of the image (hint: there is less red in the image shot by the iPhone 6). The difference isn't huge but it's commendable that the iPhone 6 not only shoots slightly lower shutter speeds thus lightening up the shadows, but it is also able to save more detail in the highlights compared to its predecessor, pointing to a slightly extended dynamic range or to a clever highlight recovery routine applied during shooting. 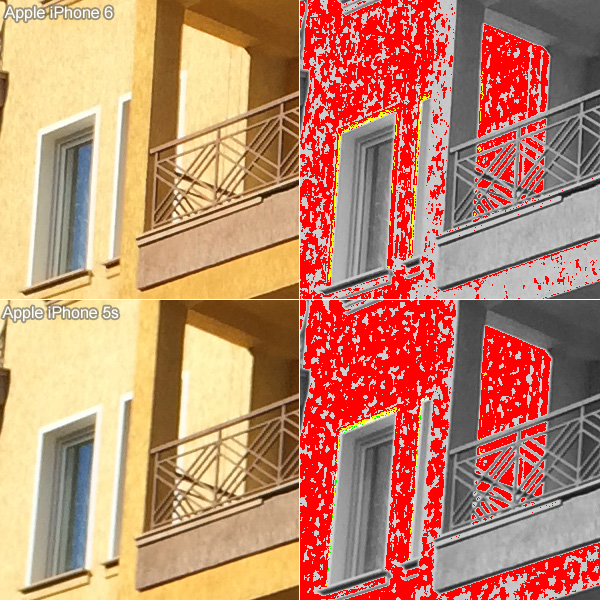 The next difference is noise performance. Apple claims it has a more advanced noise reduction algorithm working on the new iPhone and in theory it should provide lower noise, while retaining more detail. Looking at the samples below we see that the noise in the Apple iPhone 6's photo is finer and not as evident. The iPhone 5s tends to show a lot more noise, especially in uniform-colored areas such as the sky or the windows on the building. 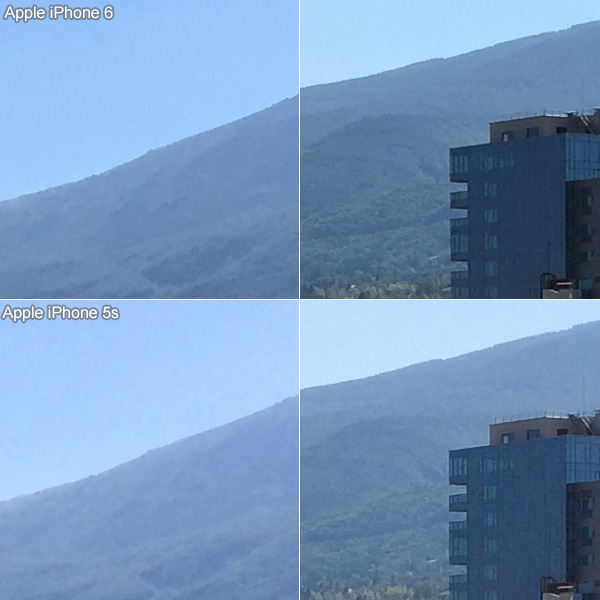 When it comes to low light performance the Apple iPhone 6 usually went for a lower shutter speed compared to its predecessor and the same ISO setting, resulting in slightly higher exposure. The difference in noise performance is most evident here - the older iPhone exhibits big, blotchy noise artefacts. The noise of the iPhone 6 is finer and much more tolerable.

The iPhone 6 offers the sharper low light results and there's more detail to go around. 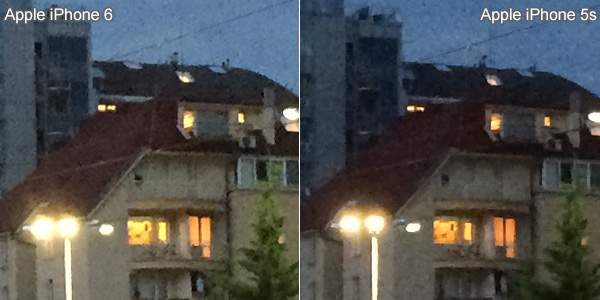 We forced the two iPhones to select identical camera parameters for this next image, which makes up for better comparison. The iPhone 6 came out on top with a little more detail, slightly better dynamic range (brighter shadows) and finer noise. 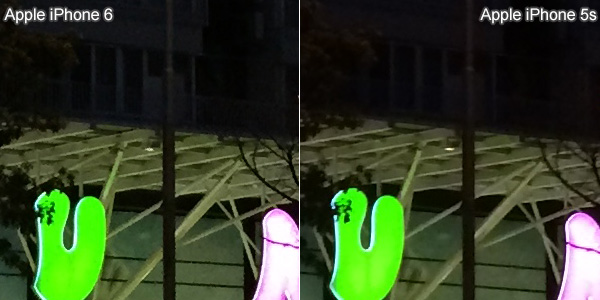 What we did notice is that phase detection autofocus was little help in low light. Both the iPhone 6 and 5s had a hard time in such conditions and required a long time to get a focus lock.

You can find the full resolution images below.