Alleged photos of the long-rumored two upcoming iPhone 6 versions made the rounds on Twitter. The images purportedly showcase a 4.7” and 5.5” mockups of the hotly anticipated device. 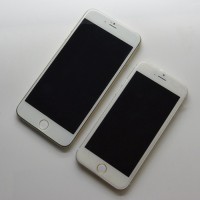 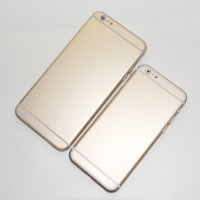 The photos fall right in line with past leaks. They show a duo of devices with ultra-slim waistline and design language which closely follows that of the iPad Air and the iPad mini 2.

Compared to the iPhone 5s and iPhone 5c, the upcoming iPhone 6 duo has seen its power/lock key move from top of the device to its right side in order to accommodate the larger display. The LED flash of the main snapper also has different design that the current setup.

Apple is expected to unveil iPhone 6 with iOS 8 on board at some point in mid to late September. You can check out a roundup of all its past alleged appearances over here.

A company that is approaching a monopoly will always attract hatred and jealousy.

All sicks & suck iPhone in the making...