The Apple iPhone 6 Plus marks the biggest camera improvement in this year's Apple lineup. It uses the same 8MP sensor as the smaller iPhone 6 but adds optical image stabilization to boost low light photography.

Apple has added what they call focus pixels to the sensor which should make the autofocusing way faster. This is the phase detection pixel technology that we've seen in higher-grade cameras for a while now and the same focusing technology that Samsung showed off in the Galaxy S5 and LG in their G3 (along with an infrared focusing unit).

The more powerful chipset and the new faster focus has enabled Apple to improve the face detection making it faster and more accurate. The panoramas got their resolution boosted and can now be up to 43MP. The new Apple A8 chipset also helps speed the whole thing up - from shot to shot times through HDR images to launching the camera app itself - it's all slightly snappier.

The camera interface is improved, courtesy of iOS 8. If you tap to focus the phone will give you control over exposure through an up and down slider. This way you can cleverly add exposure compensation depending on the scene. You can lock the focus and exposure as well but that isn't new.

Along the left side of the camera viewfinder Apple has added controls for switching to the front-facing camera, setting up a timer (either 3s or 10s), choosing the HDR mode (Auto will choose when to apply the effect, off and on) and finally a settings for the flash (Auto, on or off).

Some things are hard to reach on the huge screen estate but two hands for operation is the name of the game with the iPhone 6 Plus.

We've already commented heavily on the quality of the Apple iPhone 6 shots in our review and see the same tendencies here. The level of resolved detail is most impressive for and we dare say it has no match in the 8MP league. Images come out very sharp and the detail rendering looks as if from dedicated high-end camera and not a smartphone with a small sensor. There's no oversharpening either - overall, a very mature processing algorithm.

Colors are a little warmer and punchier than what purists will consider sane but we like them this way. The white balance was spot on in each shot.

What has been improved over last year's 8MP sensor is the dynamic range. The iPhone 6 Plus has a wider dynamic range and covers more of the light spectrum in the shot without resorting to its Auto HDR function.

Taking detailed images of things closer in the frame was a breeze with the iPhone 6 Plus. It can get very close to the subject and allows for some decent separation between subject and background. Focusing from up close felt snappy as well.

It seems that like its smaller counterpart the iPhone 6 Plus leaves the shadows as they are and tries to recover some of the detail in the highlights, just like its predecessor. The HDR effect is very subtle and we would've liked it to be a little more aggressive. 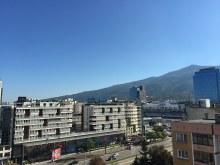 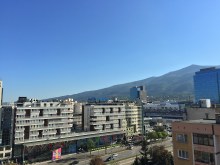 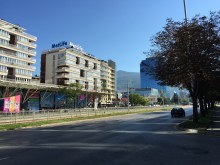 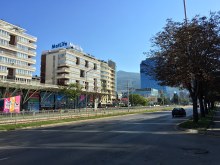 Low light is where the optically-stabilized iPhone 6 Plus should really excel over both its predecessor and smaller counterpart. OIS allows the Apple phablet to shoot at lower shutter speeds with a reduced chance of blurring. That way there can be more light in the scene at a lower ISO and as a result less noise.

OIS is expertly handled on the Apple iPhone 6 Plus. Whereas the iPhone 6 defaulted to ISOs between 200 and 320 the iPhone 6 Plus handles low light shots at ISO 100 which leads to a great noise performance. The shutter speed at which the iPhone 6 Plus captured the images below was an incredible 1/4s. Detail is superb for this light scenario and there's plenty of light in the frame.

If you are shooting moving objects at this sort of slow shutter speed, you will all but her certainly get a blurry mess. A solution is to use another photo app that would let you set a minimum shutter speed at the expense of either a darker exposure or higher ISO. 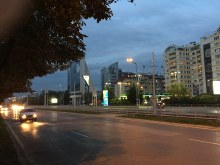 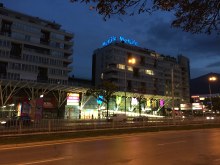 Apple iPhones have for some time now rules as probably the best panorama takers in the mobile world. The stitching is great with no visible tearing in the picture and the dynamic exposure helps to avoid blown-out parts of the scene.

The iPhone 6 Plus can capture panoramas with a maximum resolution of 43MP bringing a huge improvement over the already-great iPhone 5s panoramas. Here goes a sample.

We've enrolled the Apple iPhone 6 Plus in our photo quality comparison tool. You can compare samples with any camera in our database and see how the new Apple flagship fares in sharpness, resolution, color reproduction and detail.

Apple iPhone 6 Plus in our photo compare tool