The iPhone 6s Plus arrives in a plain white retail box with the phone printed on the lid, its color reflecting the contents. The compartments beneath the phone itself accommodate the AC adapter, rated at a lowly 1 amp, and a meter-long USB-to-Lightning cable. There also a headset bundled, separately packaged.

The iPhone 6s Plus is huge for its display diagonal, and that's hardly a surprise considering it's pretty much the same chassis as last year. At 158.2 x 77.9 x 7.3mm this year's Plus model didn't have to grow as much as the compact version to accommodate the network of sensors that enables 3D touch.

At 192g it's heavy, too heavy, perhaps. A full 20g more than the predecessor, all thanks to the 3D touch tech apparently, the weight is verging on becoming a burden. A solid slab of aluminum of the same dimensions would've weighed 245g so it's almost there.

In comparison, the Galaxy S6 edge+ with its 5.7-inch display is smaller in every direction and it's some good 39g lighter. The 5.5-inch LG G4 is a centimeter shorter and 37g lighter. With the same display diagonal, the Xperia Z5 Premium is 2mm narrower and 4mm shorter, but comes close in terms of weight with 180g worth of glass and metal.

A lot has been said about the color of the year, and we deliberately picked it for our Plus review unit. We would go ahead and call it pink, but if Apple insists on Rose Gold, so be it.

One could argue that for its sheer size and weight, the iPhone 6s Plus is a man's phone. But then again, it's a better fit for a purse than a pocket for the exact same reasons. 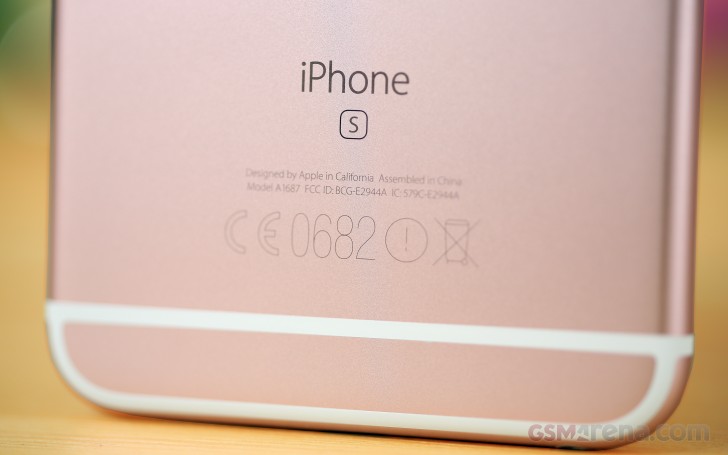 As for the paint job, it must be the same thing that makes people want a rose gold Rolex or a pink Cadillac.

Other than the color, it's a case of "spot the differences" between the 6s Plus and the 6 Plus.

iPhone 6s Plus (left) next to the iPhone 6 Plus

Sure, it's a different grade of aluminum alloy, but show us the guy who can tell the difference just by looking. Also, just dropping the 7000-series catch phrase on every half occasion tells little of the actual mechanical properties of the specific alloy used on both of the S models, versus last season's.

Good thing then that the bending, and dropping, and flamethrowing, and whatever-crossed-your-mind tests that flooded YouTube in the past few days actually proved that the new chassis is miles ahead of the bend-prone predecessor. We appreciate the steps Apple has taken, yet can't help but wonder who failed to do their homework on the first try.

Being an S year, we know not to expect changes in design. So we'll just quietly state that a year later we haven't grown fond of the antenna strips on the back. Different color options make them more or less prominent, but they're still there - and somehow more intrusive at this size. But you might not even notice them if you keep your phone packed in a case at all times.

Another eye sore are the large bezels - the iPhone 6s Plus was a champ in terms of wasteful use of footprint and nothing's changed. It's the Space Grey model that will suffer the least in this respect, with its black façade successfully blending with the display. On the other three color options, our Rose Gold included, the wide white frame around the screen is a lot more obtrusive.

The craftsmanship is up to the typical Apple standards - that is to say, unlike any other. It's hard to find another smartphone on the market that just exudes luxury quite the same way that the iPhone 6s does, and with the Plus there's just more of it.

The 2.5D ion-exchange glass is a joy to swipe, with a nearly seamless joint where the glass meets the aluminum. The buttons fit snuggly in their cutouts and have very positive clicking action. It's only the SIM card tray, or rather the frame cutout, that catches the tips of your fingers spoiling the overall sense of perfection. Of course, if you deliberately examine it, and there's now viable reason why you should.

One of the greatest changes this generation is weight. Where the iPhone 6 Plus was on the heavy side of average for a 5.5-inch device, this new 6s Plus is simply massive and there's no two ways about it. At least it hasn't grown in dimensions, so it'll fit in the same pockets, just your belt will suffer. Some cases you'll be able to reuse, some not, and the softer the case material is, the higher chance you have that it will fit.

iPhone 6s Plus in the hand

You obviously can't reach the extremes with your thumb without readjusting your grip, like Apple tradition calls for. And while fumbling with the phone, you better be careful as the finely textured aluminum back is the epitome of slippery. Grab a silicone back and forget about it.

The primary mode of interaction with the iPhone - the Home button with the Touch ID embedded inside - is where it's always been - dead center, below the display. It's being marketed as a second-generation Touch ID sensor, and it shows by the speed it takes it to recognize your fingerprint. 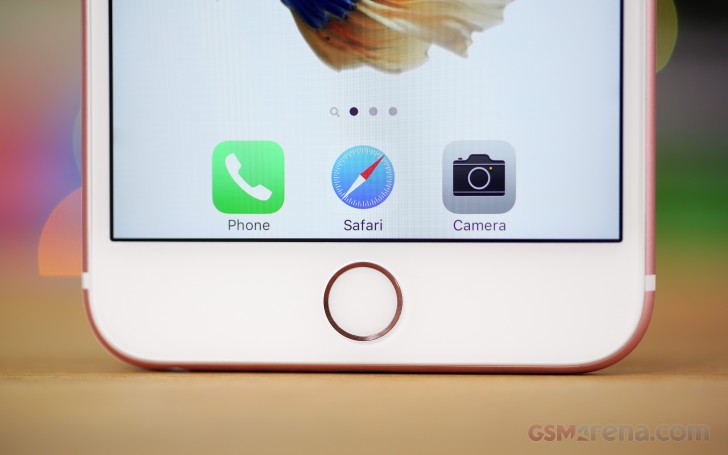 The identification works in a heartbeat and doesn't really allow you to have a glance at the lockscreen. Taking a screenshot of the lockscreen with Touch ID enabled is virtually impossible, as the phone gives priority to unlocking over the two-button screenshot combination. Of course, that's mostly a reviewer's problem, not a user's.

Up top you'll find the earpiece flanked by the new 5MP front camera and the proximity sensor above.

The new 12MP primary camera is in the old position, and sticks out by a little less than a millimeter. The front element of the lens is made of sapphire crystal, so it should be tougher than most anything it has to face in the real world. It's also colored differently, compared to the predecessor with a larger portion blacked out now.

Oh the right you have the power button towards the top and the SIM card tray we already mentioned. On the left, again in the top third, there's the volume rocker and the mute switch.

The bottom is a lot busier. The Lightning port takes center stage, a screw on each side. The speaker is to the right, while the 3.5mm jack and microphone pinhole are on the left. The top is completely bare.

Wired connectivity and mic/speaker on the bottom • nothing on top