The iPhone 6s Plus brings the long overdue camera resolution upgrade. After sticking to an 8MP sensor for four generations, Apple finally upgraded the iPhone's main camera to a 12MP imager. The front camera has received an upgrade to 5MP as well. Both cameras are paired with a lens with the same F/2.2 aperture.

The more powerful chipset and the new 12MP sensor allow the iPhone 6s Plus to capture 4K video recording among other new modes, plus it enables the so-called Live Photos. This is a familiar feature from the first HTC One - the camera captures 1.5s video either side of the moment you hit the shutter and saves it as an animated photos. 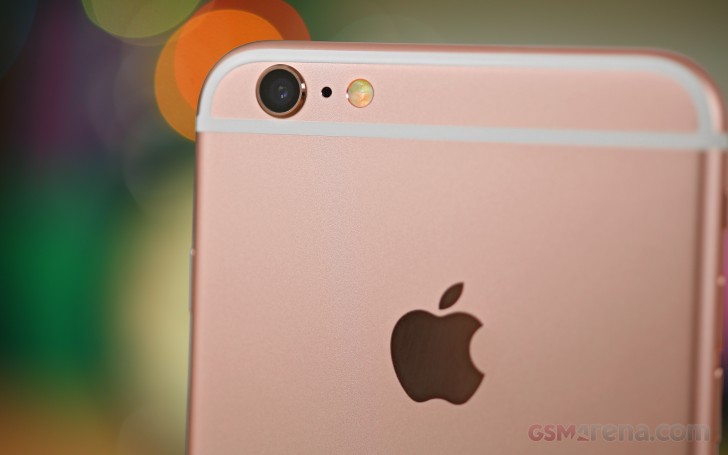 There is no magic here, this is actually a 3s 1,440x1,080px (1,280x960px from the front camera) video with sound, captured at 14fps. We are clarifying this in case you've expected gifs or similar formats. Those small files are usually 3 to 4MB of size and if you own a 16GB iPhone 6s Plus, this may turn a problem for you rather quickly. The good news is this new format is compatible with the Mac OS X El Capitan and all Force-enabled Apple devices will support the Live Photos (for now those are the MacBook Pro 2015 models, the new MacBook 12" and the iPhone 6s duo).

The front camera, as we said, is now 5MP, supports Auto HDR, and 1080p video capture. It can also use the screen as 'Retina' flash - the screen lights up the moment you hit the Camera shutter, with brightness 300% higher than the usual maximum. This helps if you are shooting indoors and up close.

The front camera is fixed-focus, but you can control and lock the exposure setting with tap and hold.

The camera interface is the same as before. If you tap to focus the phone will give you control over exposure through a slider. This way you can conviniently adjust exposure compensation depending on the scene. You can lock the focus and exposure as well.

Along the left side of the camera viewfinder you'll find controls for switching to the front-facing camera, setting up a timer (either 3s or 10s), choosing the HDR mode (Auto, off and on), turning Live Photo on/off and a settings for the flash (Auto, on or off).

Despite taking four years to add a 12MP sensor, the shots snapped with the iPhone 6s aren't quite as impressive as we hoped. The resolved detail is good, but it's not dramatically better than what the iPhone 6 offered and post-processing is rather heavy-handed - as noticeable in the sharpening halos and the prominent noise. Automatic exposure is a bit too overeager, which at times results in overexposed shots.

Now the good news - the colors and contrast are great, while the dynamic range is simply great. We've turned the Auto HDR off and yet the images came out great, which is really something given the tough weather conditions.

If it were 2014 we might have considered the samples among the best in the market, but today with great Galaxy S6 generation cameras and the impressive Xperia Z5 sensors, we just can't rate the iPhone 6s Plus camera so high. It's good, but not quite the best. 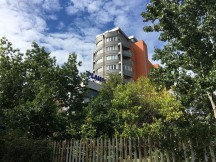 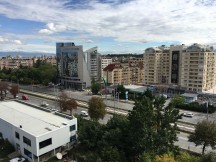 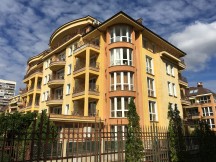 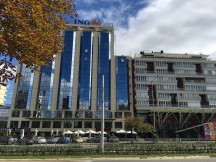 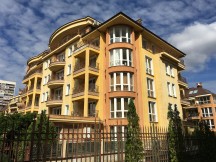 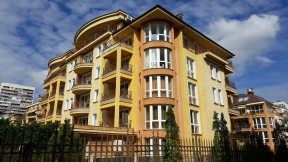 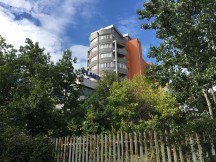 We waited out for night to set in and took a couple of shots with both smartphones. The two have markedly different approaches with the S6 edge+ going for a much higher ISO (1250 in both shots) and faster shutter speed. The iPhone 6s Plus, on the other hand, chose a 1/4s shutter speed in both instances with ISO either 125 or 250.

The Galaxy images are noticeably brighter with more detail in the shadows, but also less defined light sources with a glow around them. The iPhone 6s Plus is less noisy, but keep in mind that the Galaxy S6 edge+ is shooting at ISO1250, so its images are quite good for such a high sensitivity. That said, the iPhone doesn't feel the need to crank the ISO so high, instead relying on the OIS, and indeed, there's no camera shake despite the rather long exposure.

In fit-to-screen magnifications the Galaxy images have an arguably more consumer-friendly rendition though, being brighter and with a little warmer colors. 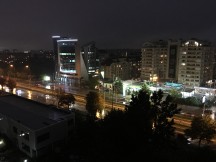 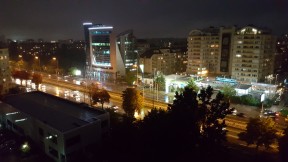 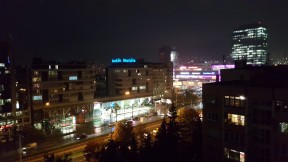 We tried a few HDR samples as well and they turned fine - they bring more detail in the shadows, without overexposing the highlights or sacrificing fine detail. It's a very subtle difference and while we appreciate the conservative approach, you may find yourself struggling to achieve that distinct HDR effect.

A nice touch is that you can set the iPhone to save a regular photo alongside the HDR one, so you can use the original should you choose to do so. That's perhaps part of the reason why the smartphone takes a brief moment of thought before you can shoot another image. It's nothing to be worried about as the camera is blazing fast to begin with. 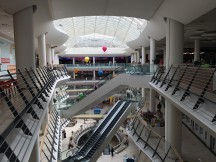 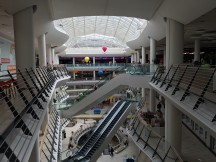 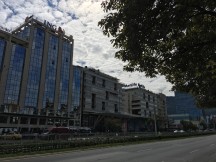 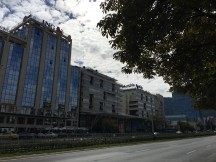 Finally, the iPhone 6s Plus, thanks to the bigger sensor, offers even bigger panoramic images. Those still cover about 180-degrees, but now they can go up to 15,000 x 4,000 pixels or 60MP. The stitching is great, there are no artefacts, the dynamic range is amazing, and the color rendering is good, too. Those didn't turn out over exposed as the still images and generally are among the best panoramas we've seen.

We snapped a 5MP picture with the front selfie camera, in case you are interested in its quality. The resolved detail isn't that high, but it's certainly an improvement over previous gen iPhones and will do just fine for the social networks.

You can see that the focus is fixed nearby, so distant backgrounds are quite blurry. It's obviously the right way to go though, as selfies are typically taken at arms length. That's been the thought behind the Retina flash feature, which lights up the display at up to 3 times its usual maximum brightness to illuminate selfies in dark settings. It also tailors the tint to match the ambient light. It's better than nothing and can save you in extreme cases, as long as you don't expect miracles. 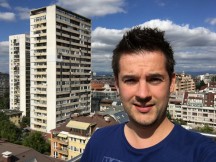 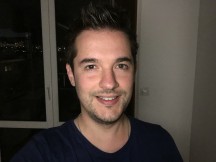 You can use our picture compare tool to put the iPhone 6s Plus camera head to head with other phones.

Apple iPhone 6s Plus in our photo compare tool

Thanks to the higher-resolution sensor the new iPhone 6s Plus is now capable of recording 2160p videos at 30 frames in addition to 1080p capturing at 30 and 60 fps. There is a new mode as well - 1080p at 120 fps for slow motion purposes, in addition to the 720p at 240 fps low-mo videos. Naturally, there is a time-lapse option as well.

The camcorder UI is as simple as it can get, offering nothing but the flash setting. You can find the resolution switch in the Settings menu instead of having a shortcut in the viewfinder. True, it's a one-time switch for most users once you choose your preferred resolution but having it handy in the camera app is the more natural solution.

An interesting point is that our 64GB version came with 4K enabled by default, and we've heard that 16GB models are set to 1080p out of the box - a very intriguing way for Apple to address the inadequacy of the mere existence of a 16GB base model.

Update, October 31: We've just added a video comparison between the iPhone 6s and 6s Plus, which shows the benefits of optical image stabilization. A feature exclusive to the larger model, OIS allows for even smoother hand-held videos on the iPhone 6s Plus. The otherwise excellent output of the 4.7-inch model is no match for the results delivered by a true hardware solution.

The 4K videos carry a bitrate of around 51Mbps, but audio is subpar recorded in mono at 81Kbps in AAC format. The 1080p videos at 30 fps have a bitrate of 17.6 Mbps, keeping the same audio, while the 60fps ones came out with 26Mbps bitrate.

The 4K videos are slightly less processed than still images - there is some noise, but less over-sharpening while the detail is decent if not quite class leading. Dynamic range is once again impressive and the frame rate is pretty steady, but the mono audio is disappointing.

The 1080p videos at 30 and 60 fps are great, with lots of detail, fine colors, steady frame rate and superb dynamic range. Once again - the audio is just mono, which is rather hard to swallow at this price point.

The Apple iPhone 6s Plus is ready to meet the competition in our Video Compare Tool.

Apple iPhone 6s Plus (2160p) in our video compare tool

Apple iPhone 6s Plus (1080p) in our video compare tool