The latest iPhone rarely needs an introduction - it's always one of the most anticipated flagships each year and often sets the bar for the premium smartphone niche. Fans know Apple has put its heart in it and media's reviews, whether praising or not, usually don't matter and don't affect masses' decision.

Long reviews are often considered :TLDR, another reason why they don't really matter. So, this is an attempt to lay out some facts about the iPhone 6s and puts the scores in some perspective.

The exterior of the iPhone 6s is identical to its predecessor's - an aluminum unibody and Ion-X 2.5D glass shielding the 4.7" Retina display. The phone is 14g heavier though due to the new ForceTouch technology beneath the screen.

The good news is Apple used the new Series 7000 aluminum, which is tougher than the Series 6000 used to cast out the iPhone 6 shell and is less likely to bend in your pocket. The ion-strengthened glass with oleophobic coating is also a combo promising durability and smudge-free surface. 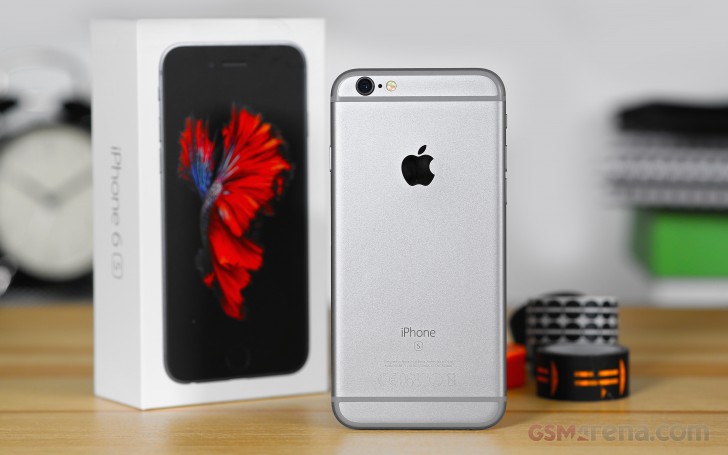 The bezels of the Retina screen are thick and not flagship worthy, but since Apple usually recycles the last year's design for the S series, this wasn't such a surprise. Fingers crossed for the iPhone 7 to finally improve on those.

The iPhone 6s doesn't offer dual-SIM or memory expansion, nor you can switch batteries. Those are limitations present since the iPhone inception.

Handling the iPhone 6s is nothing short of pleasure. The aluminum provides for a good grip and premium feel, but the rounded edges, while improving the looks, compromise the grip and we'd recommend to handle the 6s with care or use a thin case or bumper.

While the display may hide an entirely new (force) touch technology, it's still the same display in terms of size and resolution as on the iPhone 6: a 4.7" unit with a resolution of 750 x 1334 pixels (that's 326ppi). It's an LED-backlit IPS LCD screen with RGB matrix.

The Apple iPhone 6s display offers deeper blacks than the iPhone 6 but, unfortunately, it's not as bright at its maximum setting. The maximum brightness level achieved by the screen when displaying white is 536nits, which while not award winning is plenty to go by. The offered contrast ratio, is excellent - 1481:1, beating the iPhone 6 on this one. 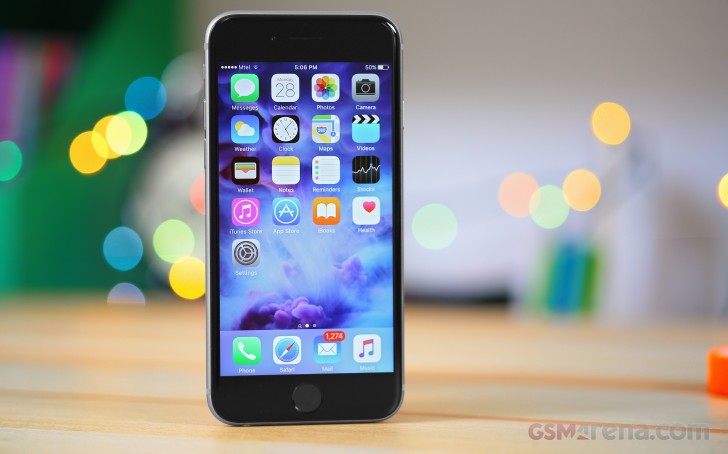 The 6s demonstrated a solid performance in our sunlight legibility, which means hassle-free operations outdoors even in the brightest of days.

The color rendition of the screen is generally accurate with a pretty low average deltaE of 3.6 (for the primary colors plus black and white), and it's the white and reds that show a somewhat higher deviation. The white is slightly on the cooler bluish side, but nothing major and certainly not noticeable without a reference.

The iPhone 6s is powered by a non-removable Li-Po 1715 mAh battery, which is about 5% smaller than the one of the iPhone 6. iOS 9 introduced a Low-Power mode, which you can enable manually and should save your phone from dying faster once the charge drops below 20%.

There is no official fast charging support, though tests suggest the iPhones do recharge faster when plugged on an iPad 2A charger. We've tested the iPhone 6s with various 2A plugs, but only the iPad's one did the trick.

The total endurance rating of the iPhone 6s is 62 hours - an hour better than the iPhone 6. The rating of 62 hours is an estimation of how long the 6s would last if you use it for an hour each of calling, browsing and video playback a day.

The Apple iPhone 6s audio output is identical to that of its predecessor. When plugged into an active external amplifier, the Apple iPhone 6s posted excellent scores with the rather mediocre stereo crosstalk reading being the solitary exception.

Rather impressively, there's virtually no degradation when you plug in a pair of headphones. The spike in stereo crosstalk is so limited that in comparison, the iPhone 6s fares way better here than in the first test. Granted, there are phones out there that do even better, but that will only matter to the most extreme audiophiles.

In both cases, volume levels were above average although Apple used to be class leading here too and now it's just matching most competitors and falling behind the elite. Still, the overall output is very good and would please the majority of users.

The speaker on Apple iPhone 6s scored a Below Average mark in terms of loudness. This is a lesser result than the iPhone 6. On a positive note the speaker's sound quality has been slightly improved for a richer and crisper sound.

The iPhone 6s brings the long overdue camera resolution upgrade - Apple finally updated the iPhone's main camera to a 12MP imager. The front camera has received an upgrade to 5MP as well. Both sensors retain the same F/2.2 aperture.

Live Photos is a new exclusive feature to the 6s lineup - the camera captures 1.5s video either side of the moment you hit the shutter and saves it as an animated photo. Then you can play those animations in the gallery.

The resolved detail is good, but it's not dramatically better than what the 8-megapixel iPhone 6 offered and post-processing is rather heavy-handed - as noticeable in the sharpening halos and the prominent noise. Automatic exposure is a bit too overeager, which at times results in overexposed shots.

The good news is the colors and contrast are simply great while the dynamic range is nothing short of impressive. Even with the Auto HDR turned off, the images came out great.

So, the pictures are beautiful and the iPhone 6s won't fail you, no matter the occasion, but the pixel peepers won't find those impressive at full resolution.

The images from the 5MP front selfie camera don't offer extraordinary high resolved detail, but the camera is a certain improvement over previous gen iPhones and the selfies should do just fine for the social networks.

Finally, the iPhone 6s, thanks to the bigger sensor, offers even bigger (auto HDR) panoramic images. Those still cover about 180-degrees, but now they can go up to 15,000 x 4,000 pixels or 60MP. The stitching is great, there are no artifacts, the dynamic range is amazing, and the color rendering is good, too. Those didn't turn out over exposed as the still images and generally are among the best panoramas we've seen.

The 4K videos are slightly less processed than still images - there is some noise, but less over-sharpening while the detail is decent if not quite class-leading. Dynamic range is once again impressive and the frame rate is pretty steady, but the mono audio is disappointing. Apple should be focusing on adding stereo audio capturing.

The iOS 9 looks pretty much the same as its predecessor. All of your apps are on the homescreen, you can group them in folders and there is the familiar dock that can take up to four shortcuts. System icons, color themes and transparency - everything is like we left it in iOS 8 and beyond. 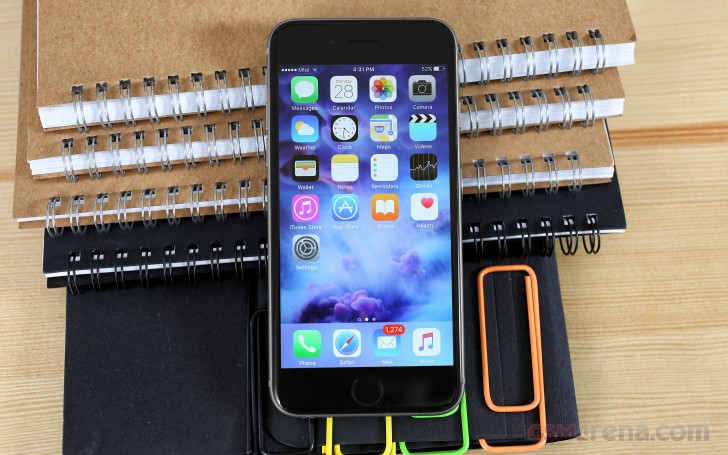 Siri and the Spotlight Search have been improved with new features and capabilities, basically both became smarter and more powerful. There is the new pro-active assistance available system-wide, which is more or less Apple's take on Google Now - it provides relevant information to you in advance - before you start typing something or before you leave for some place (work, home).

The new 3D Touch gestures are available only on selected system apps. You can use it on the lockscreen, the homescreen, and within apps. Force Press on various apps will pop up menus with quick shortcuts to the most often used functions or content. Within apps Force Press usually pops out preview bubbles (emails, messages, links), some advanced menu, or helps you navigate easier. In the gallery it plays the Live Photos if available.

With the new iOS 9 Apple also launched its Apple Music streaming service - it's available in most countries worldwide and turned out to be an excellent competitor to Spotify and Play Music. It comes with a 3-month trial, which gives you enough time to decide.

We really like the iCloud capabilities of the iPhones, mostly because of the iCloud backups. Those provide complete backups of your phone and if you lost your device, or switch to another, just restore from iCloud and you are back in the game in no time. No setups, no installs, no configurations.

The iOS 9 has lots of limitations - it has just few customization options, there is some hassle when uploading files on your phone, and you have always to rely on iTunes for loading some music. Luckily, the latter is pretty much obsolete if you use Apple Music, Play Music, Spotify, or similar.

Still, the iOS 9 is one of the fastest operating systems around, has the richest App Store, and is very easy to operate and navigate.

The iPhone 6s and 6s Plus are powered by a brand new Apple A9 chipset, which packs a dual-core 1.85 GHz Twister processor, PowerVR GT7600 six-core graphics, and 2GB RAM. It also has improved thermal properties.

Apple has always focused on the single-core performance since it is the most important one when it comes to interacting with the iOS user interface and it turned out the 64-bit Twister core is the best and fastest CPU core currently on the market. Two of those beats can easily match the performance of the latest quad or even octa-core processors used by Android phones.

Our benchmarks put the Apple iPhone 6s among the fastest smartphones right in terms of raw processing performance, graphics, and all-round system behavior. It easily outruns the Galaxy S6 in the all-round tests and graphic benchmarks, which says enough. There is nothing the iPhone 6s can't handle and it would probably take years before the 6s meet a proper challenge.

The Apple iPhone 6s is one of the few compact flagships out there, which should alone give it a better fighting chance. The mere fact of being the latest iPhone would be enough reason for many people to buy it and they won't need our review. Still, you may be happy to hear that the iPhone 6s is one of the most beautiful and powerful smartphones out there and it certainly deserves your consideration.

The new 6s model delivers stellar performance, a lively mid-sized display, and an adequate battery life. The still camera quality is great - it can handle all scenes hassle-free though the pixel peepers may not like the amount of resolved detail. The video recording could have befitted from stereo audio capturing though.

Finally, the 3D Touch addition to the Apple's closed and secure iOS ecosystem enhances its usability further and gives an edge over the competition. It may not be as user-friendly as Android, but this allows for some extra benefits others can't have. It isn't the best solution, but still.

The iPhone 6s is far from a perfect device, so it's up to you to decide whether it's the perfect one for you or not. If you are fine with the limitations imposed by Apple, the iPhone 6s might as well become your best pal. There is the iPhone 6s Plus as well - for the big-screen aficionados.

Switch OFF location ! ! ! The battery will be OK ! Why ? Coz with location ON the GPS is always running !!!

The phone is very good