The Apple iPhone 7 and iPhone 7 Plus will be one of the hottest smartphone announcements this fall. Naturally, pricing is what's on everyone's mind and the latest information regarding their price tag comes from Apple's largest wholesaler in China - Leleda.

The information from Leleda confirms the iPhone 7 and iPhone 7 Plus will come in 32GB, 128GB and 256GB flavors, marking a notable change from the 16GB, 64GB, 128GB variants we had so far through the years.

Here's the pricing for the SIM-free variants. It seems that Apple will double the storage of the upcoming iPhone models without affecting the price compared to the current iPhone 6S and iPhone 6S Plus.

Note that these prices are the "expected" ones, as the source of the leak puts it.

Finally, a leaked packaging of an iPhone 7 Plus confirms indisputably there will be a 256GB version - so far only the iPad had 256GB and it's a first for the iPhone. Not only that, but the packaging also confirms the contents of the iPhone retail box. Inside customers will find a new EarPod headphones with a Lightning Connector just as rumored - complete with a Lightning to headphone jack adapter. The standard Lightning cable and power adapter are also included. 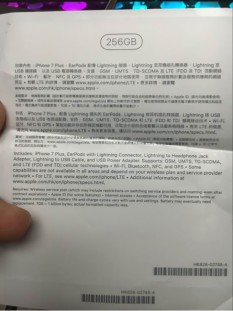 The Apple iPhone 7 and iPhone 7 Plus will be unveiled just a week from today, on September 7.

I got it on a flash sale deal thats why I got a bnew phone for low price. Totally a steal. If i buy a gaming pc for 1100$ i will have windows, windows mobile, and emulate android os inside the computer which is a good thing very flexible, rather than...

You don't care, yet you visited the page and posted a comment.