After months of leaks Apple just took the wraps off its iPhone 7 Plus with two cameras.

The dual camera setup on the back combines two sensors to work as 2x optical zoom similar to the solution offered by LG with its G5 and V20.

The new cameras on the iPhone 7 Plus are one "wide" angle 28mm and a "telephoto" 56mm unit. Both have 12MP sensors and the camera can combine the two perspectives to achieve a shallow depth of field effect. The iPhone 7 Plus does this by building a depth map and isolating the background from the subjects - and what's cooler is that you can see the depth of field effect in real time before you take an image. This isn't anything new - we've seen it from Nokia, HTC, Google and other makers. 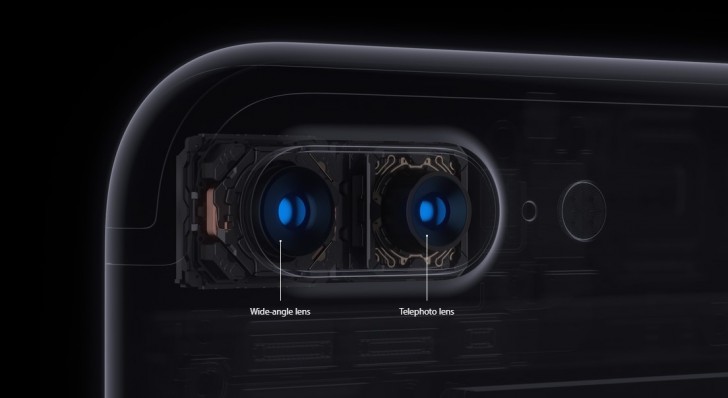 The new 12MP snapper is 60% faster and 30% more efficient. Like its predecessor the camera has optical image stabilization. The lens is a new 6-element lens with a quad-LED flash to aid in low light. The 28mm camera has an f/1.8 aperture while the 58mm telephoto camera has a rather slow f/2.8 opening. The FaceTime selfie camera has received a two megapixel bump up to 7MP.

With number 7 Apple has introduced a new, polished design which Apple has machined to make the glass and aluminum feel like one seamless piece of hardware. The camera hump has been carved straight from the block of aluminum and there's a new stainless steel Apple logo on the back. The antenna lines have become more discreet now and are less visible.

The Apple iPhone 7 Plus comes with a brand new Jet Black variant with a mirror-like glossy finish. But in case you're a fan of the old anodized finish you get a new Black color variant to go along with the Gold, Silver and Rose Gold color options. 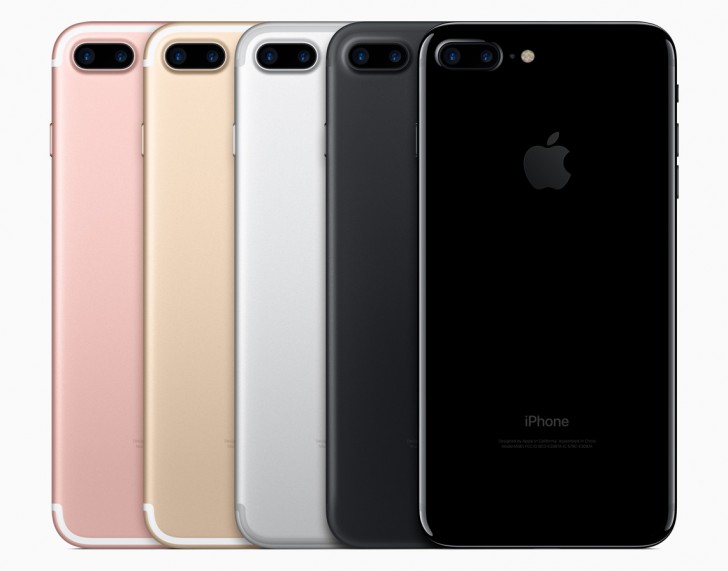 Apple has finally ditched the classic mechanical home button. Following in the steps of the Macbook trackpad and the displays on the Apple Watch (1 and series 2) and the iPhone 6s the home button is now a 3D Touch button. Apple has included a new, more sensitive Haptic Engine underneath the button to give you physical feedback when using the button. With the Haptic Engine the iPhone 7 Plus will now have more sensitive vibrations throughout the OS.

One of the most dialogue-provoking rumors is now a reality - the new iPhone 7 Plus comes without a 3.5mm headphone jack but Apple has you covered with lightning EarPods and a 3.5mm to lightning adapter in the retail box. There are no Bluetooth AirPods as standard, though - you'll need to pay a $160 premium for those.

The Apple iPhone 7 Plus also brings stereo speakers. One speaker is at its usual downward-facing position while another one is hidden under the earpiece. Apple promises the new iPhones will be twice as loud as the previous ones.

The iPhone 7 Plus also isn't afraid of water with a rating of IP67 so you can dip it in water up to 1 meter deep and don't have to worry about dust.

The Apple iPhone 7 Plus comes with a new A10 Fusion chipset with a quad-core processor and 3.3 billion transistors (if you care about that stuff). Two of its cores are high-performance for tough hauls and the other two are battery-saving for idle time.

The graphics processor inside the A10 Fusion is 50% faster than the one inside the A9 in the Apple 6S Plus.

Apple claims the iPhone 7 Plus lasts about 1 hour per day more than its predecessor. Apple's preliminary figures taut 60 hours of wireless audio and some 13 hours of LTE browsing.

You can preorder the iPhone 7 Plus from September 9, starting at $769 with a new base storage of 32GB, while 128GB and 256GB are the roomier options (the shiny Jet Black version only comes in 128GB and 256GB). Availability starts on September 16.

Not really liking it. Prefer the Green/teal Sony Z5 premium. Something else about how the iphone 7 plus was designed. The iphone 7 doesn't look as good either. Weird. The camera lens may help somewhat.

I like all the new features of the Iphone 7 even if it is a copy of Android smartphones. But it still missing the 'ka-boom' feature of Samsung.