The 12MP iPhone 6s camera makes it to iPhone SE

The iPhone SE utilizes the same 12MP imager we saw on the iPhone 6s generation with F/2.2 aperture and dual-tone flash. The front camera, unfortunately, is the same as on the iPhone 5s - a 1.2MP shooter.

The powerful chipset and the 12MP sensor also allows the iPhone SE to capture 4K video recording. It also enables the so-called Live Photos - the camera captures 1.5s video either side of the moment you hit the shutter and saves it as an animated photo. 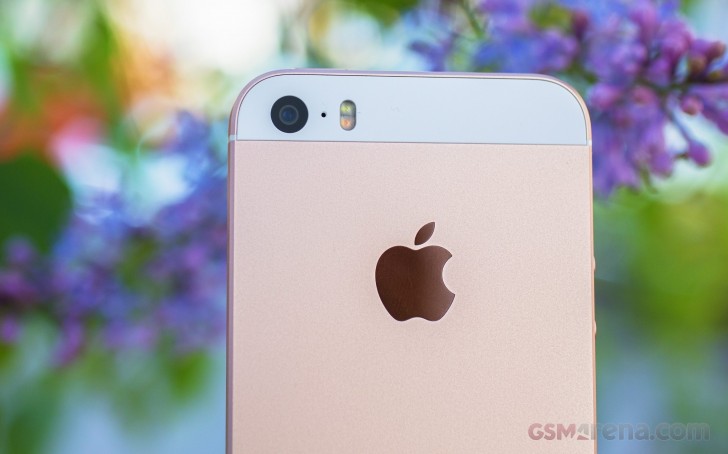 The front camera, as we said, is the old 1.2MP snapper, supports Auto HDR, and 720p video capture. It can also use the screen as 'Retina' flash - the screen goes all white the moment you hit the Camera shutter, with brightness 300% higher than the usual maximum. This helps if you are shooting indoors and up close, but nothing can make up for the low resolution.

On on either side of the virtual shutter button you get swipe controls that will take you into the photo, square and pano mode, video, slow-mo and time-lapse. To activate the Burst mode, you just need to press the camera shutter longer.

First we wanted to address the elephant in the room - are the iPhone SE photos the same as the iPhone 6s samples? Yes, they are. We have prepared a short shootout for you to see for yourself.

The photos taken with the iPhone 6s weren't that impressive, and so are the iPhone SE images. The resolved detail is good, but it's not dramatically better than what the iPhone 5s and 6 offered, and not on par with the current crop of flagships. The post-processing is rather heavy-handed - as noticeable in the sharpening halos and the prominent noise.

But there is good news - the colors and contrast are great, while the dynamic range is nothing short of impressive. You'll barely need to use the HDR mode.

We tried a few HDR samples as well and they turned out fine - they bring out more detail in the shadows, without overexposing the highlights or sacrificing fine detail. But the difference between the HDR and non-HDR photos is rather minor.

Finally, the iPhone SE, thanks to the bigger sensor, offers big panoramic images with enhanced dynamic range. Those stills cover about 180-degrees, and can go up to 15,000 x 4,000 pixels or 60MP. The stitching is great, there are no artefacts, the dynamic range is amazing, and the color rendering is good, too. The detail could have been better, but we aren't complaining as everything else is great.

The 1MP selfies are hardly something to talk about. They will do the job, the Retina flash will help in the dark, but we wouldn't write home about those.

We shot two 5MP selfies with the iPhone 6s to illustrate the big step backwards.

You can use our picture compare tool to put the iPhone SE camera head to head with other phones. 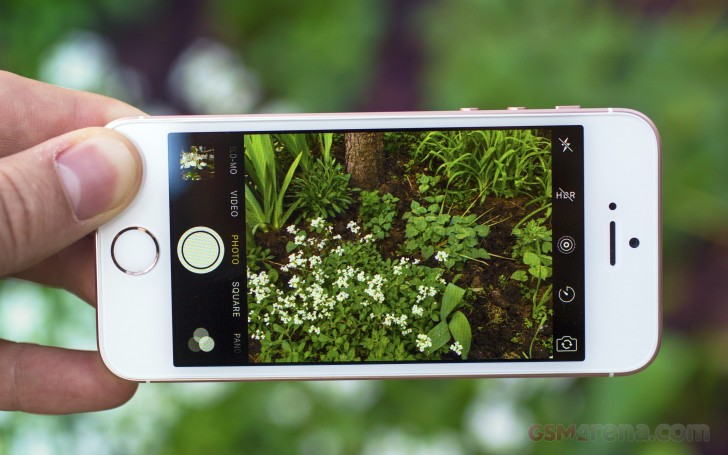 Naturally, there is a time-lapse option as well.

The 4K videos carry a bitrate of around 51Mbps, but audio is subpar, recorded in mono at 83Kbps in AAC format. The 1080p videos at 30 fps have a bitrate of 17.6 Mbps, keeping the same audio, while the 60fps ones came out with 26Mbps bitrate.

The 4K videos are slightly less processed than still images - there is some noise, but less over-sharpening while the detail is decent if not quite class-leading. Dynamic range is once again impressive and the frame rate is pretty steady, but the mono audio is disappointing. We found the videos to be identical to what the iPhone 6s captures.

The 1080p videos at 30 and 60 fps are great - well-stabilized thanks to the software stabilization, with great amount of detail, fine colors, steady framerate and superb dynamic range. Once again - the audio is just mono, which is rather hard to swallow at this price point. On a positive note, the mono audio is a lot better than what Xiaomi Mi 5 and Mi 4s do with the stereo sound recording.

The Apple iPhone SE is ready to meet the competition in our Video Compare Tool.