The iPhone X's retail box gets no special treatment - it's like the ones to come before it. Inside you'll find a sluggish 5W charger, a Lightning cable, a pair of EarPods, and a Lighting-to-Analogue adapter. Oh, and there are a few Apple stickers inside, in case you were wondering.

The retail box • the contents • the iPhone X

Sizing up the X between the iPhone 8 and the 8 Plus is the best way to see what trimming those bezels have achieved. The X is pretty much as big as the iPhone 8 and way smaller than the Plus model.

Apple iPhone X compared to the iPhone 8 and 8 Plus

Four years in a row Apple has recycled, refreshed, reused, and reimagined the same design over and over again. Until the iPhone X, that is. But it won't be an iPhone without some controversy attached to it. So, is that really a complete redesign? 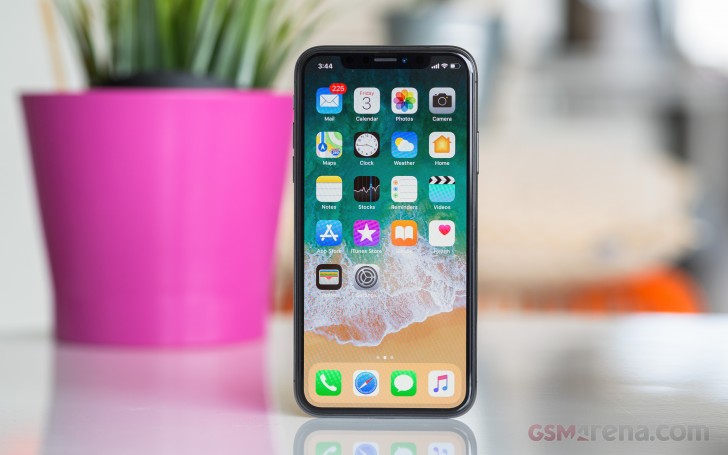 The all-screen front says yes. Look at that! It's a breath-taking view, eyesore notch or not. The bezel-less screen respectfully retires the iconic Home key, though the Touch ID is gone in the process too. But what we gained is a striking new AMOLED screen for the most immersive iPhone experience to date.

Flip the X, and you are at a familiar all-glass back. Apple has been opting for glass once again since the iPhone 8, and it has been a pleasure having that feeling again in our hands. It was Apple that made the glass phones a thing, and we are glad to be handling glass iPhones again even though the company was last to jump on this bandwagon. 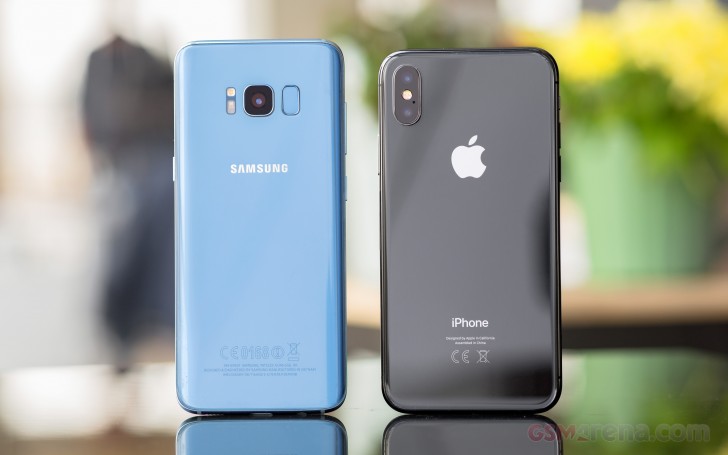 The back panel is clean and the bulging camera is the only thing to disturb the shiny glass surface. The camera lens module is now positioned vertically, and its looks are not our favorite. The new setup is bigger and thicker, and the surface around the lens is shinier which doesn't help its case either. We suppose the orientation had been more of an engineering decision rather than a design-related one, so this may be nitpicking. Still, we would have preferred it the old way. 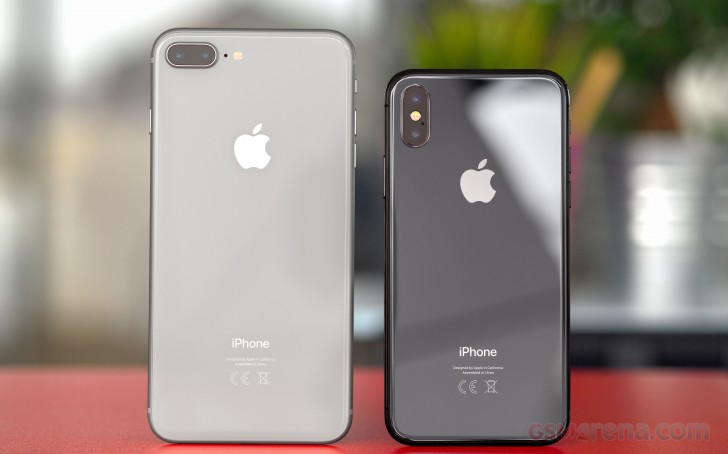 Then there is the frame that holds everything together, and now it's made of stainless steel. This frame has made the phone sturdier but also a lot heavier than the iPhone 8. The new high-gloss finish on the frame is also probably easier to scratch. But with all those fingerprint smudges all over it, you'll probably never notice the accumulated scrapes. 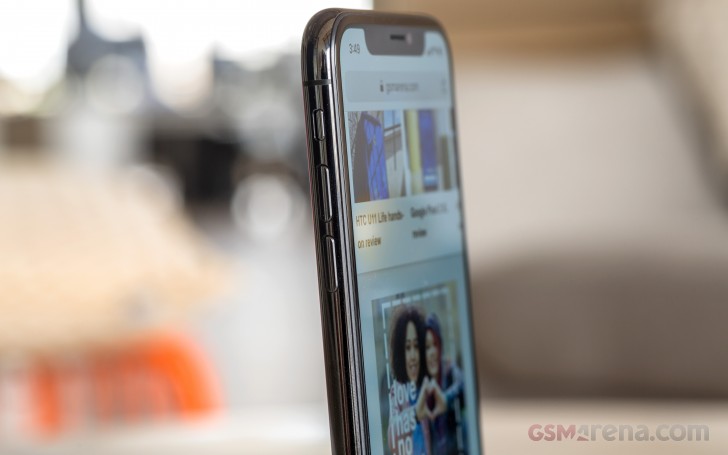 The frame isn't the only thing Apple reinforced better since the water-proofed iPhone 7 and 8. The screen has an additional rubber gasket between the frame and the screen glass, so it should absorb hits better and protect the AMOLED from breaking. And the screen glass itself isn't as curved as Samsung's, and Apple likes to advertise it as the toughest glass on the planet. Well, it may be tough, but it sure scratches rather easily, which is a bummer. 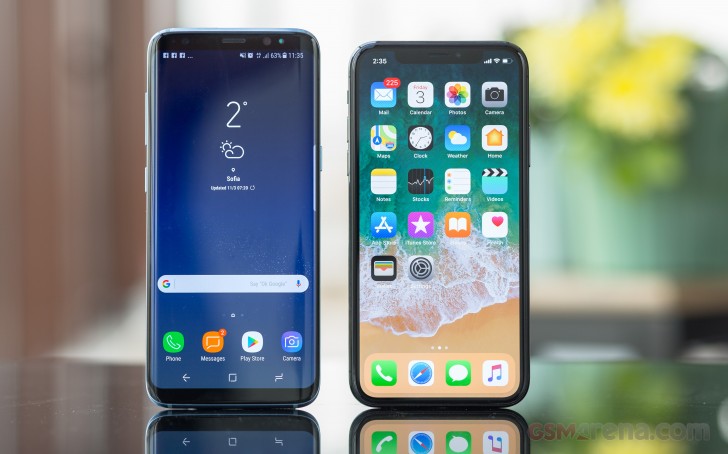 Now back top the screen. Apple likes to advertise the OLED as a 5.8" unit, and that's technically true, but unlike the Galaxy S8, the iPhone X has the notch up there taking up some space. Throw some spare (white)space at the bottom of any app window to balance the notch visually, and you get pretty much the same active screen area as on the iPhone 8 and quite less than the 5.5-inch iPhone 8 Plus. These are software limitations which we'll talk about in a bit. 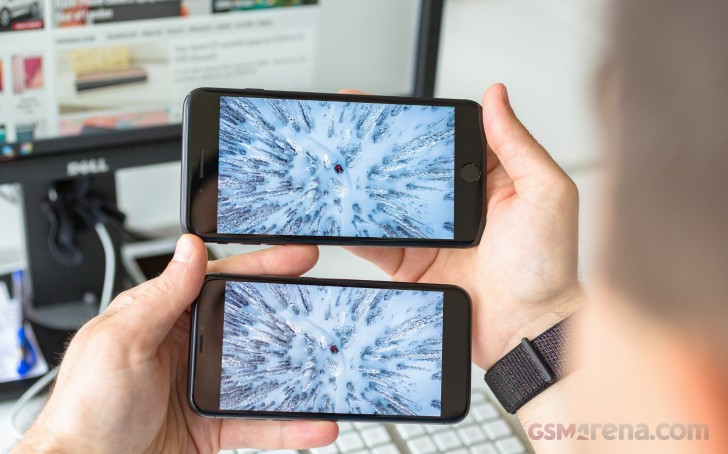 The iPhone X isn't that bigger than the iPhone 8 and that makes it one of the most comfortable phones right now. It sure tries to fit a big screen within a tiny body and is mostly successful, but the handling is where the iPhone X excels. 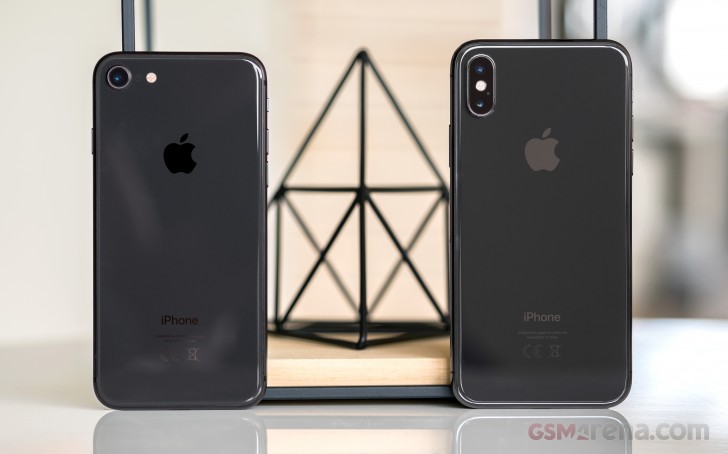 You can operate the X with just one hand all the time; you can reach anything anywhere on the screen. Yes, the phone is slippery, but due to the small form factor, the iPhone X is easily secured by your grip. The X was thoughtfully designed and is easily likable from both the iPhone and iPhone Plus fans.

And back to the very first question - is the X a complete redesign? Hardly. If it looks like an iPhone and feels like an iPhone, then it doesn't redefine the iPhone design as we know it.

The iPhone X has what it takes to push future Apple phones to the next level though. The all-screen front is enough to change the narrative and everything else (whether it's the new steel frame or the notch and oddly oriented camera hump) is a byproduct of the process of moving forward. We just wish the phone didn't feel so rough around the edges (figuratively speaking).

The front of the iPhone X has changed the most. There is no Home key, it's all-screen you might say, if it wasn't for the notch. The notch is very crowded though - under that grille is the earpiece, which is also a speaker, and a built-in microphone. The selfie camera is around, too, and pretty hidden under the glass is a whole bunch of tech - infrared camera, flood illuminator, and dot projector - all the essentials for Face ID, proximity, and four-channel ambient light sensors.

The volume keys and the silent switch are on the left, while the power key and the SIM slot are on the right, as usual. The top is completely bare, while the bottom has the Lightning port and two dotted grilles - one for the mouthpiece, and another one for the second speaker.

The updated dual-camera is on the back, bulging more than ever. It houses the two camera sensors and the quad-LED flash. Somewhere beneath that glass back is the wireless charging coil.

The glass back • the dual camera • camera hump