Both phones are capable of recording video up to 4K resolution at 60fps. Obviously, 4K at 30fps is available too, as well as 1080p in both 30fps and 60fps, plus a 24fps mode on the iPhone. Both phones will record in your choice of h.264 of h.265 codecs, depending on whether you prioritize compatibility or small file size. 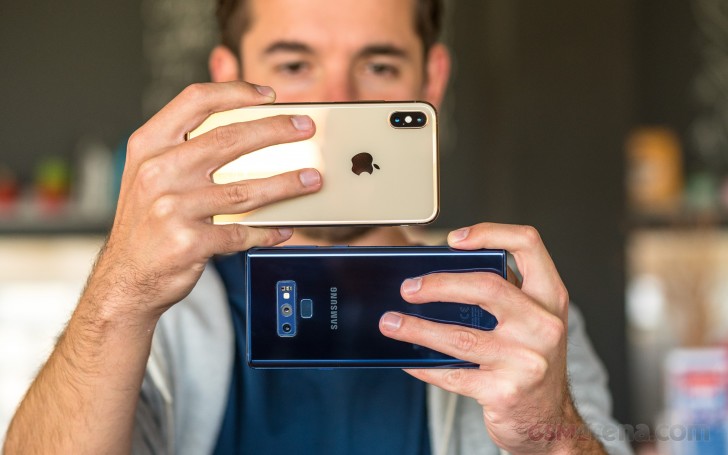 Daylight videos are mostly very similar - you might have heard us say that about the photos. With the main cams, whether you're shooting in 4K or 1080p, there's little to split the two. The iPhone has slightly better detail in the 4K footage, while the Galaxy is only just a bit sharper in 1080p. The iPhone's colors are warmer, and saturation is higher, but not by much, and we certainly wouldn't call the Galaxy's colors dull. Dynamic range is just about the same in our balcony scene.

We've also snapped a set of screengrabs, in case you'd want to examine the detail without being distracted by motion.

With the telephoto camera we have a clear winner though. The iPhone's 4K/60fps videos with the tele cam in good light are vastly superior to the Note's, with a considerable detail and sharpness advantage. 4K/30fps footage is also better on the iPhone, though only slightly so. In 1080p the Galaxy is at least on par, however, and possibly even better than the iPhone in 30fps.

And the mandatory screengrabs to illustrate our point.

Software stabilization is available on both phones. The Note9 clearly states in settings that there's no stabilization in 4K/60fps, and that is also the case on the iPhone, though it's not explicitly said. Both do benefit from the stabilized optics - it's something at least.

The 4K/30fps and the 1080p footage is very well stabilized on both phones, but we do prefer the iPhone's extra smoothness. The Note9 has particular inertia that could lead to some slightly more abrupt motions when panning. In any case, handheld video recording on both phones is a non-issue, and you can count on getting steady capture.

We shot some low-light videos as well, and here we have to give it to the iPhone for its much better handling of highlights. Point light sources are blown out and have bleeding halos on the Note9, while the iPhone has preserved their true color and has left some edge definition.

And on to some screengrabs.

As for audio, Apple has finally joined us in this century and started offering stereo sound to go with its moving pictures. The Galaxy's audio track is cleaner and with wind noises filtered better, while the iPhone sounds boomier in the lower regions and not necessarily in a good way.