Apple is now pushing iOS 9.2.1 to all supported devices 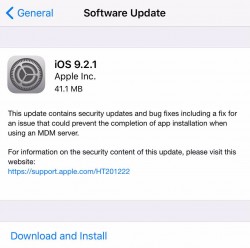 Today Apple has commenced the rollout of the update to iOS 9.2.1 for all supported iPhones, iPads, and iPod touch units out there. The general release starts today following a beta version of iOS 9.2.1, which went out to eager testers last month. In the meantime, an iOS 9.3 beta has been outed as well for those who are part of Apple's beta testing program.

As its version number implies, iOS 9.2.1 is not a big release. It doesn't come with new features, it only focuses on bug fixes, performance improvements, and reliability enhancements.

Included is a fix for an issue that could prevent the completion of an app's installation when using an MDM server. For now it's unclear if the battery indicator bug that we've reported on yesterday is also fixed in iOS 9.2.1. Surely though some other unnamed improvements are in too.

Common sense enters the Apple boardroom for once