Today Apple has made the iOS 8.3 beta 2 available for developers. So they can now test it, tinker with it, and report the bugs they find back to the Apple mothership.

The newest version of iOS brings with it a more diverse collection of emojis and flags. As a release note, Apple mentions that "the dialog that appears when connecting an iPhone to a CarPlay-compatible car is not functional". Also, Verizon's Voice-over-LTE service isn't supported in iOS 8.3 beta 2. 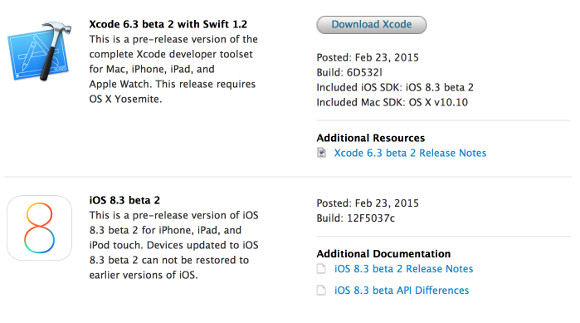 The first beta of iOS 8.3 went out earlier this month, and it had more new features compared to the second one - wireless CarPlay support, improved Google login, an updated voice for Siri, Apple Pay support in China, and a new emoji picker. This followed the release of iOS 8.2 beta 5 at the beginning of February.

The final build of iOS 8.2 is due to be rolled out next month to all compatible devices, with no additional betas to be outed in the meantime. On the other hand, iOS 8.3 may get a public beta period starting in mid-March. The public beta might come at the same time as the third developer beta.

A second beta of Mac OS X 10.10.3 is also out today, complete with a new Photos app, and there's a new beta OS available for the Apple TV too.

OSX is a different topic. And bugs in 5.0 were nothing compared to 7 and 8. And what break? The jumps from 2.3 to 4. 4 to 4.4 each were considerably larger than the average life span of an i device in function and update.

Updated to OSX 10.10.3 No issues. Much much better then the first yosemite. But as expected, its minor version only. Look at Android .. the jump from 4 to 5 also have tons of hiccups. And they took a break for 4 years in android os 4 LOL..