Apple has released the final stable build of iOS 10.3 and watchOS 3.2. The updates are now available for download on compatible iPhone, iPad, iPod touch and Apple Watch devices through OTA updates and also iTunes in case of iOS. We had outlined the changes in one of our older posts before but to summarize it again, the 10.3 comes with some notable user facing as well as under the hood improvements.

One example of the former is the option to find AirPods under the Find My iPhone app, that plays a sound to help you locate your lost AirPods as well shows their last location on a map. 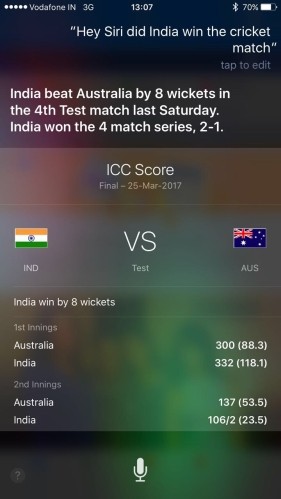 CarPlay, a component of iOS, now has shortcuts in the status bar for easy access to last used apps, Apple Music Now Playing screen gives access to Up Next and the currently playing song's album, and daily curated playlists and new music in Apple Music.

Other changes include support for new iTunes feature that lets you rent movies on one of your Apple devices and then watch them on any of the others, new unified view for your Apple ID right at the top in the Settings app, in-app review prompts for developers so you will no longer be thrown from an app to the App Store when you select to give a rating and can now rate the app from within the app itself, ability for developers to leave replies to reviews, new thread view in Mail app to see individual message in a thread as a separate mail, and more. As for under the hood improvements, iOS 10.3 also brings support for the Apple File System, or APFS, which replaces HFS+. As for watchOS 3.2, it now includes Theater Mode, which turns on silent mode and keeps the screen dark until you tap it, so it doesn't turn on the screen when you are in a dark place like, well, a theater. Siri on the Apple Watch now also works with apps to start workouts, send messages, make payments, book rides, and more.

I have the same thought as you. I used android devices my whole life but the new ios 10 made me think about using an iPhone. So, I bought an iPhone and believe me. I think I made a good purchase.

My problem in my iphone 6 in ios 10.3 i don't load the memory Apple lose in ios 10 very slow i like android systems very quick and smooth