After a few weeks of beta testing, Apple has finalized iOS 11.1 and made it available today for supported devices. This release doesn't bring huge new features compared to iOS 11, which debuted last month, but that doesn't mean you should ignore it. 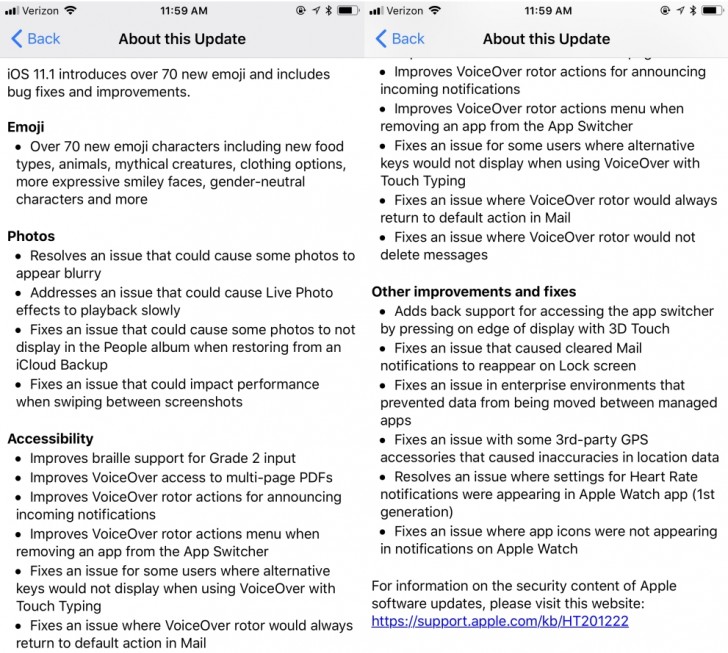 As usual, there are many improvements and bug fixes in tow too. Support for accessing the app switcher by 3D Touch pressing the edge of the display is brought back, while issues that caused photos to look blurry or not display in the People album when restoring from an iCloud backup have been addressed. You can see the full changelog in the image above, but those seem to be the most important bullet points.

Additionally, Apple is making watchOS 4.1 available for its wearables, and this release enables music streaming on Apple Watch Series 3 with Apple Music or iCloud Music Library. You can also listen to live radio on Series 3 (Beats 1, custom stations, and expert-curated ones too). Also on the music front, Siri can find and play songs, playlists and albums for you on your wrist. Fitness data can be synced with GymKit-enabled treadmills, ellipticals, stair steppers, and indoor bikes. It's now possible to disconnect from a Wi-Fi network in Control Center on Series 3, and many bug fixes are included here as well.

macOS High Sierra 10.13.1 is out too, with new emoji of its own, a fix for the KRACK Wi-Fi vulnerability, and more reliable Exchange message syncing in Mail. A bug which made Bluetooth unavailable during Apple Pay transactions is fixed, as is an issue relating to Spotlight not accepting keyboard input.

Finally, tvOS 11.1 is rolling out to Apple TV (4th gen) and Apple TV 4K. There are no new features to speak of in this case, it's all about unnamed bug fixes and performance enhancements.

the motto it should be: cut one bug, two more shall take it's place

My Iphone 5s missing the header like telco information time and battery indicator when t home sceeen .But when in a setting it’s will show all.. why