Today marks a shakeup in Apple’s lineup - first was the introduction of an 8GB iPhone 5c and now Apple has discontinued the iPad 2. The iPad 4 will be taking its place and price tag. 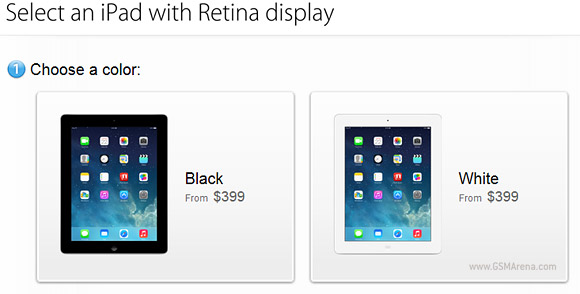 The iPad 2 was left as the budget option in the big iPad lineup when the iPad Air was unveiled, but at $400 it was too much for such old hardware. The iPad 4 features a Retina display, Lightning port and a modern chipset.

The iPad 4 (“iPad with Retina display”) is available in Black and White at $400 for a 16GB Wi-Fi only version. There are no other storage options, but there’s a Wi-Fi + LTE version at $530 for the major US carriers.

With this move Apple has almost completely phased out the old 30-pin adapter, the iPhone 4S is the only holdout (and the cheaper iPhone 5c 8GB aims to replace it). This would make it easier for the company when a unified charger becomes the law of the land (it will only need one adapter instead of two).

What's the point of your inability to spell words properly or use punctuation correctly? What are YOU trying to say?!!!

What is the poent of your message? What do you want to say?

I did it, changed my Galaxy Nexus for an iPhone5. I lived the transition from iOS6 to iOS7. Got bored, sold the iphone and bought a Nexus 4. I had the iphone for about 3 months, couldn´t stand it anymore.