The Apple-Samsung trial goes on, shows us new iPhone prototypes

The second day of the Apple vs. Samsung trial went interesting to say the least. After the court denied Samsung the right to make an argument that a Sony concept was the real inspiration behind iPhone's design, the Koreans decided to take matters into their own hands and released the evidence, which has been previously dismissed by the court.

The evidence in question consists of twelve slides showing that Samsung couldn't have possibly ripped Apple off as they've been working on devices like it months before iPhone's launch. Such device is the company's F700, among others. 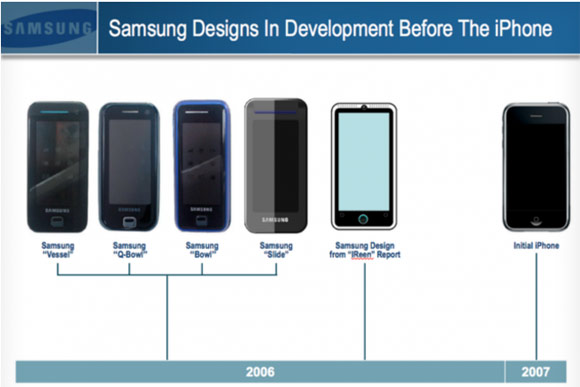 However, Judge Lucy Koh has had enough of that and got really irritated with Samsung's actions. She even asked John Quinn, Samsung's lead attorney, to write a declaration explaining his role in releasing the excluded evidence to the press.

Judge Koh had already rejected the evidence multiple times. She noted that "Samsung has filed like 10 motions for reconsideration," and even threatened Quinn with personal sanctioning. This came after reportedly, he literally begged the court to reconsider its decision about the evidence in question.

Check out some of the evidence in question.

Back to the trial at hand, it became clear that Samsung's position in all this is that they did not copy the iPhone and that even though they may have used some tech patented by Apple (the touchscreen), it is Apple that is infringing on much more important patents held by Samsung (3G stuff).

Charles Verhoeven, Samsung's attorney, stated Apple did not invent the rectangular design with rounded corners (hence the leak of the discarded evidence): "Samsung is not some copyist, some Johnny come lately doing knockoffs," he added. Verhoeven also went through Apple's list of patents and tossed them aside one by one citing reasons why they should be excluded.

Christopher Stringer, Apple's veteran designer since 1995, was first to take the stand as the company's witness. As he went on with his testimony, he revealed a lot of the early iPhone and iPad prototype designs.

Additionally, Stringer stated that Apple has been "ripped off". "It's a huge leap in imagination to come up with something new. That's what we did," added the veteran Apple designer.

Fortunately, TheVerge.com got hold of those prototype's images. Check out some of them below, and we'll let you be the judge if they resemble anything familiar.

its only because apple doesn't lead the market anymore... The photos show its them stealing.. not samsung or who ever they go after next...

The last prototype picture looks like an xperia phone O_o