Q2 of 2011 is now almost over and the results are in for the smartphone shipments volumes. Just a week ago it became certain that Apple has surpassed Nokia in smartphone shipments for Q2 but now Samsung and HTC have released their numbers. Strategy Analytics confirm that Apple has come out on top with 20.3M iPhones shipped, Samsung is a whisker away with 19.2M in second place, whilst Nokia is the only Top 3 manufacturer to report a decline in year-to-year numbers with 16.7M (Q2 of 2010 - 23.8). Interestingly enough, HTC is probably in the fourth spot with 12.1M smartphones shipped between April and June. 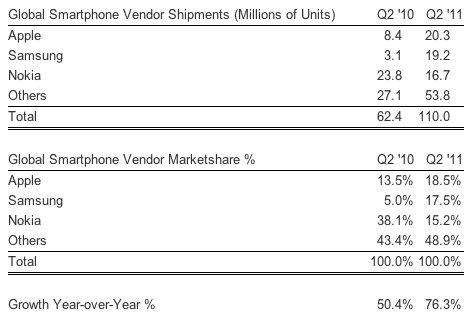 The only thing that stands between a certain fourth spot and HTC are LG's smartphone shipment results for Q2 2011. Since the manufacturer decided not to disclose the numbers and went with total phone shipments, all we're left with is a guessing game. Still, some estimates point out that LG plans to ship a little over that 20M smartphones for the whole year so it couldn't have shipped more than HTC this quarter alone. We can't know for sure though. You can find HTC's detailed report here. 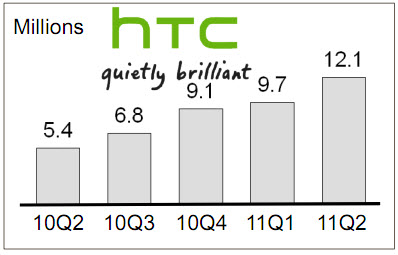 With the way the tides have turned in the last year, the smartphone market share has grown by 76.3%, which was reported by Alex Spektor, Senior Analyst at Strategy Analytics. The trend is that year after year smartphones will carve themselves a more important role in our lives.

Judging by the intense rumors of a September 6 iPhone announcement we could be looking at even more impressive Apple results in Q3.

if you want a simple os then Apple is the way forward, if you want to really use a phone then Anroid is best, As for symbian i have not known any os with so many problems, Its got to the point where i dont sell Nokias anymore shortly followed by sony...

That's very funny! You label Android as a bad OS and yet you continue to reafirm your objectivity! You are portraing Androin in strong negative terms and yet you claim you speak from an objective high ground! That's one of the most hipocrite attitude...

how come nokia is not able to give a basic dual sim phone which has taken more than a year time(released C200) but not fulfilling the customers/nokia fans expectations yet, when other phone makers have already established a lead in this dual sim tech...